For an upcoming release, I dove into a little research on playground equipment in the Victorian and Edwardian eras.

I knew there would be slides and swings. 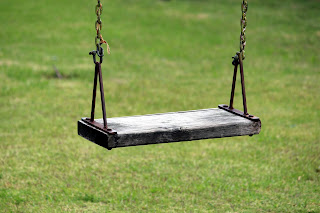 And what's a playground without a seesaw or merry-go-round? 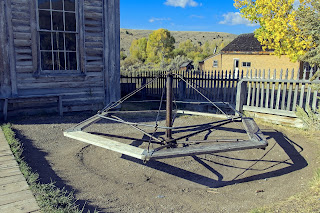 Although the terms jungle gym and monkey bars wouldn't arrive for a few decades, many playgrounds had high metal pipes with ladders that children could climb. 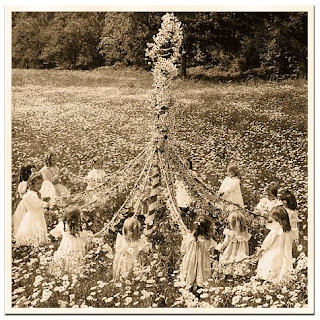 I love to envision a pole where children would tie ribbons and flowers for a Mayday celebration. So pretty and sweet!

Then I happened upon an image of a playground from the early 1900s that brought back a flood of my childhood memories. 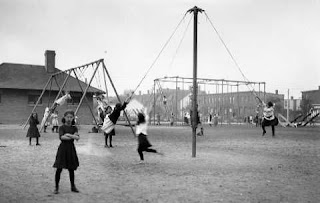 That pole in the center is not one meant for lovely spring celebrations. It's a giant stride. Basically, it's a tall pole with chains attached to it. At the end of the chains are ladder-style handles that children can hang onto and swing around the pole. 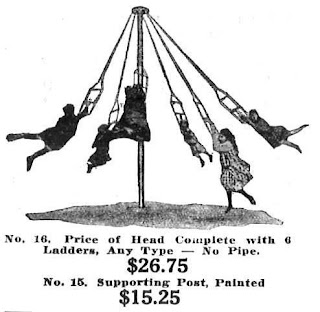 According to experts of the day, it was a grand form of exercise. 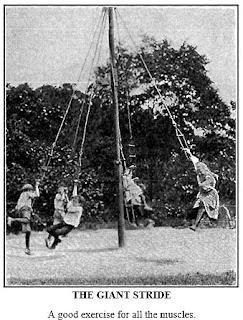 I went to a country school that had four classrooms divided among eight grades. Even though the school was small, we had quite an assortment of playground equipment (most of which would have been found on a Victorian playground), including a giant stride.

If you were in one of the younger grades, it was known to stay away from it if the older kids were out at recess.

I discovered the reason why one day at lunch. Since no one was playing on the giant stride at the time, I’d walked over and grabbed onto one of the metal handles. It was cool beneath my hands as I started running in a circle. It spun around and around, lifting me into the air (which didn’t take much when you’re six). Then some of the older boys jumped on and started running and running. I was trapped! If I let go, I knew they’d trample me. If I hung on, I feared I might cast up my accounts because they had it spinning so high and fast I was completely dizzy.

Just when I saw my very short life flash before my eyes, they all bailed off. The handles they’d turned loose were flailing around and one smacked me in the back of the head. That was the first time I recall seeing stars before my eyes.

At any rate, the giant stride was fun to play on as long as the ornery big boys weren’t around. When I was older, there was nothing quite like the feeling of soaring into the air as you swung around the pole.

In my story, Evie (releasing May 23), she is a nanny to three youngsters. The couple Evie works for has hired a landscape architect, Flynn, to design elaborate gardens for their yard. Only, they forgot to mention a place for the children to play to Flynn. When Evie discovers the oversight, she asks Flynn to incorporate a play area for the children. Her requests evolves into the two of them taking a trip to the park to examine the playground equipment, which in turn finds them testing out several pieces.

Here is an excerpt of them swinging on the giant stride. 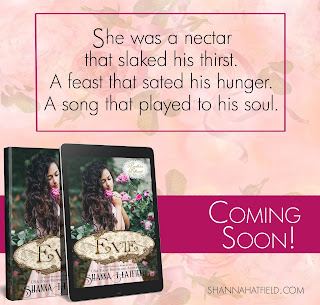 “I’m not certain I understand how this works. Would you be willing to provide a demonstration?” Flynn asked. He offered Evie an innocent, imploring look.

“Well, I…” She glanced around. The children who’d been playing had disappeared and no one else was in the area. Evie straightened her shoulders and nodded. “I suppose a brief exhibition with an explanation couldn’t hurt anything.”

With one final glance at their surroundings to ensure they were alone, she removed her hat and set it aside then stepped up to one of the handles. She placed her left hand on the top bar and her right on the middle. “I’ve found it easier to hold on when you stagger the placement of your hands, like so.”

“Then what happens?” Flynn asked, shoving his hands in his pockets to keep from latching onto the handles on one of the chains. Or placing his hands on Evie's trim waist. “Show me, please?”

“Very well.” Evie took a tighter grip on the metal bars, then frowned and released her hold. Quickly, she removed her gloves and tossed them next to her hat, then gripped the bar again. “It’s quite easy to operate, even alone,” she instructed. “You simply run a few steps and the momentum will carry you along.”

She took several running steps, then lifted her feet and swung around the pole. When she started to drop, she ran again, sailing higher the second time. Her infectious laughter floated around Flynn, taunting him to join in the fun. Her skirts, much fuller than the fashionable hobble skirts, ruffled in the breeze and he caught a glimpse of a lace-edged petticoat.

A gentleman would have averted is gaze, but Flynn was thoroughly transfixed by the woman swinging around like a child turned loose for recess.

The third time she started taking running steps to launch herself back into the air, he darted behind her and latched onto a handle. Evie glanced over her shoulder at him in surprise, but her smile widened. “Faster, Flynn! Let’s go faster!”

How about you? Did you have a favorite piece of playground equipment. Or memories from your childhood playground years? 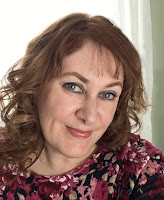 USA Today Bestselling Author Shanna Hatfield writes character-driven romances with relatable heroes and heroines. Her historical westerns have been described as “reminiscent of the era captured by Bonanza and The Virginian” while her contemporary works have been called “laugh-out-loud funny, and a little heart-pumping sexy without being explicit in any way.”
Convinced everyone deserves a happy ending, this hopeless romantic is out to make it happen, one story at a time. When she isn’t writing or indulging in chocolate (dark and decadent, please), Shanna hangs out with her husband, lovingly known as Captain Cavedweller.
Shanna is a member of Western Writers of America, Women Writing the West, Romance Writers of America, Sweet Romance Reads, Cowboy Kisses, and Pioneer Hearts.
Find Shanna’s books at:
Amazon | Amazon UK | Barnes & Noble | Smashwords | Apple | Audible