Look what our authors published in June to July 1st 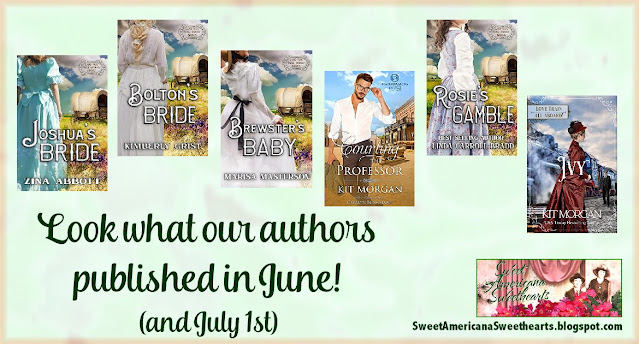 Our authors have been busy writing and publishing books this past month. Here is what we published in June

(and, because we're already in July, we've included July 1st):

Rose Calloway feels guilty about living off her sister, Marigold’s, meager schoolmarm’s wages. In spite of taking in sewing, it is not enough to support herself. She sees little future for marriage in a town where people are still struggling from the latest economic depression. She responded to a matrimonial advertisement, and after corresponding for several months, sees great promise for her future with Joshua Kent.

Joshua Kent, landless and working as a farrier, sees promise in the land run planned for the Cherokee Outlet in Oklahoma Territory. Knowing once he claims his land, he will need a wife, he places a matrimonial advertisement. He soon decides Rose Calloway is the woman he wishes to marry. However, once he realizes there might be more applicants than there is available land, he writes and warns Rose he can only marry if he is successful claiming his own homestead.

Marigold, realizing the land run will bring new families, sees there will be a need for teachers and a chance to achieve her dream. She decides to make her own land claim and insists Rose is welcome to join her.

Rose is homeless unless she marries or goes with her sister. She holds a certificate for the latest Oklahoma land run in one hand and the final letter from Joshua Kent in the other. Her dream is to marry Joshua, not own land. What will she do now?

A Woman not of this world

And one bottle of disinfectant ...

The 21st Century: Professor Andrew Beaumont was a chemistry professor, not a physicist, so when two strange men show up asking about time travel, he was a little confused. Never mind the fact one claimed to be a duke, it's when they brought up Clear Creek that Andrew's ears perked up. One of his students had seen bright lights just outside the town and talked abut aliens. Was there more to the boy's story, or had the kid been reading too many science fiction novels?

The 19th Century: Tillie White was different, shy, and some folks in Clear Creek thought she was just plain loco. Little did they know she was so much more. And though Tillie had an inkling she was different, she had no idea how much. That is until a strange man dressed in odd clothing showed up on her doorstep. Yet, as odd as he was, he was also familiar. Too bad she was too terrified to leave her house to find out why.

Ivy Pembrooke has a problem. With her brother gone, she's now the heir to the Pembrooke fortune and estate. That is, if she lives long enough. After over hearing a plot to kill her, she does what any other heiress would do. She makes a run for it. But how is she going to elude her would be killers and claim what is rightfully hers? Especially when said killer is her uncle? She decides to run now, and figure things out later. In the meantime, she needs a way of escape ...

Darius Jones made a promise. Quit the ranch he worked for in Texas, return to Oregon, and take his half-blind mother to Clear Creek. The doctor there was said to work miracles, and Mama needed all the help she could get. But his mother wasn’t the only one. A passenger in the form of a petite, blonde-haired spit fire was going to be the death of him. Literally. Was someone trying to do her harm or was trouble her middle name? Yet there was something about her, and doggone if he didn’t try to help. He just hoped doing so didn’t get them both killed.

…some come as blessings
Anxious to leave behind the whispers and stares of two failed engagements, Boston socialite, Ainsley MacKenzie hopes for solitude on her way to New Hope, Kansas. But when the kindly conductor enlists her help to care for two orphaned girls, she couldn’t say no. Little did she know their uncle and guardian was the one man she couldn’t forget… Lucas Harmon.

Taking a chance, Ainsley offers Lucas an unusual (some might say, scandalous!) arrangement. She’ll look after the children, read them stories and cook their meals until Christmas, giving Lucas time to find a permanent replacement. Yet, the longer she cares for the family the more she longs to be part of it—whatever the risk to her heart.

In 1917 every man, woman, and child was called to civic duty as the “war to end all wars” encompassed the globe.

When the patriotic call comes, Adella begins her campaign of encouragement by corresponding with the frightened and lonely soldiers. On the cusp of adulthood, the young woman is tired of living a cosseted life and hopes to gain her parent’s support when she wants to volunteer her services to the war effort. Her mother worries for her safety, but Adella is more concerned for her heart.

As a recent college graduate, Gibb is led down a path he never anticipated. And one unexpected meeting at a train station tips all of his carefully laid plans into chaos. In the void, Adella’s words of affection flow across the continents. The image of her smile and the consistency of her letters give him a reason to hope.

Sabrina Whitmore, daughter of a wealthy railroad investor, has finally found a man who accepts her suffragist work. On the night before her wedding, she overhears her fiancé bragging that if he can’t get her to toe the line after their marriage, he’ll just have her committed to an asylum and take charge of her inheritance. Sabrina escapes the family mansion with her maid and rushes to the Philadelphia train station headed toward an aunt in Denver. When she awakens the morning before her arrival, she discovers her maid is nowhere to be found and has stolen her clothes and most of her money. While hunting for her maid, she sees Maeve spirited away by two burly men and is scared her fiancé is hunting her.

Derrick Burkhardt bumps into a woman matching the description of the governess he hired from a St. Louis agency. Needing to get her settled at the ranch before he leaves for the spring roundup, he does all the talking during the buggy ride. When he returns two weeks later, the ranch is in an uproar over the governess’s unorthodox teaching methods. All Derrick sees are his children at the happiest they’ve been in two years. Will he feel the same when he learns the governess is not who she claims to be?

Ellie is on the run from a marriage being forced upon her by her uncle. Her only chance of escape is the man to whom she had been writing for a year. If only his letters spoke of more than friendship.

Paleontologist Rand avoids becoming entangled in marriage. A wife would expect him to stay home with family instead of spending his summers digging for his beloved dinosaur and mammoth bones.

When Ellie arrives in Iowa City, only to discover Rand is gone, his friends send her to the wilderness of southern Wyoming. Will she find love amidst the dirt and rocks or only bones of creatures long dead?

She’s shaking off the dust of her well-worn boots, not looking back and hoping for a transformation. All she needs is a new dress, a new town, a husband, and a fresh start.

Daughter of a traveling merchant, Bethel is tired of peddling her Daddy’s Special Sauce and being run out of town by every sheriff east of the Mississippi. That’s why she’s heading west. She just needs to sell a few more bottles to help fund her trip. After all, who wants to meet their new husband looking like a gypsy? If only she could shake off this pesky sheriff waiting at the stage stop.

Posted by Zina Abbott Author at 9:37 AM No comments: