Look what our authors published in May! 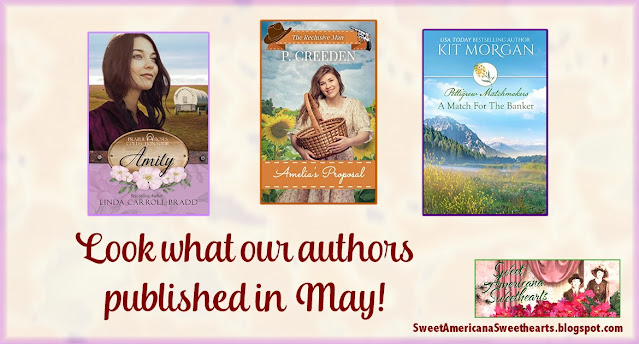 Our authors have been busy writing and publishing books this past month. Here is what we published in May:

Amity Grenville is set on reaching Oregon’s Sweet Home Valley, where her aunt and uncle have a farm. They were part of the Great Migration of 1843, and Amity saved every letter Aunt Beitris wrote, complete with advice on the journey preparations. Amity is eager for a fresh start, in the hopes that her husband, Garvey, will find a new vocation in farming and leave behind his drinking and gambling ways.

Newly finished with his apprenticeship, blacksmith Shawe Creighton can ply his trade just about anywhere so he agrees to throw in with his best friend’s family on the trek to Oregon. With no family ties, he heads west, thinking Oregon is as good as any place to establish a shop. Fun loving by nature, he’s also looking forward to what the adventure will bring.

In St Joseph doing last-minute preparations for the journey, Amity receives the bad news that Garvey was caught cheating and killed over a poker game. Now men are seeking to claim the wagon and team as their recompense. She barely removes her belongings in time but is faced with either marrying a stranger to comply with the wagon train’s rules or remain behind. Taking pity on her plight, Shawe offers marriage and is immediately faced with her two demands--no drinking or gambling. Intrigued by the outspoken woman, he figures the trip won’t be boring. Will a decision made in haste bring disaster, or will the journey forge bonds neither Amity nor Shawe can imagine?

Can an invisible man find the love and acceptance that he's never had?

As a halfbreed, Angus Macawi has never been accepted by his native tribe, or the townsfolk of Fort Pierre. He's lived on the outskirts both literally and figuratively. No one wants anything to do with him--he's invisible to everyone--until he meets Amelia Fletcher. This irksome female refuses to leave him alone, even though he does everything he can to stop her from visiting him, he can't help the feelings she's stirring within him. Would it be okay for him to feel hope for the first time?

A Match for the Banker: A Sweet Historical Western Romance (Pettigrew Matchmakers Book 4)

Tangie Sullivan had a problem. Two actually. Her family's business was failing and worse, the cause was pushing her parents for her hand in marriage. The lout ran the neighborhood, forcing business owners to "pay for his protection". It was only a matter of time before he got what he wanted.

Mason Pratt didn't plan on rescuing a damsel in distress, especially a feisty florist from one of the poorest neighborhoods in Denver. But once he knew her family's predicament, he had to do something. Unfortunately, the only thing he could come up with was to pretend he was said damsel's betrothed. Now both their lives were in danger. Can he save everyone before it's too late? Find out in this fun romp as only Kit Morgan can deliver!

Rose Calloway feels guilty about living off her sister, Marigold’s, meager schoolmarm’s wages. In spite of taking in sewing, it is not enough to support herself. She sees little future for marriage in a town where people are still struggling from the latest economic depression. She responded to a matrimonial advertisement, and after corresponding for several months, sees great promise for her future with Joshua Kent.

Joshua Kent, landless and working as a farrier, sees promise in the land run planned for the Cherokee Outlet in Oklahoma Territory. Knowing once he claims his land, he will need a wife, he places a matrimonial advertisement. He soon decides Rose Calloway is the woman he wishes to marry. However, once he realizes there might be more applicants than there is available land, he writes and warns Rose he can only marry if he is successful claiming his own homestead.

Marigold, realizing the land run will bring new families, sees there will be a need for teachers and a chance to achieve her dream. She decides to make her own land claim and insists Rose is welcome to join her.

Rose is homeless unless she marries or goes with her sister. She holds a certificate for the latest Oklahoma land run in one hand and the final letter from Joshua Kent in the other. Her dream is to marry Joshua, not own land. What will she do now?

…some come as blessings
Anxious to leave behind the whispers and stares of two failed engagements, Boston socialite, Ainsley MacKenzie hopes for solitude on her way to New Hope, Kansas. But when the kindly conductor enlists her help to care for two orphaned girls, she couldn’t say no. Little did she know their uncle and guardian was the one man she couldn’t forget… Lucas Harmon.
Taking a chance, Ainsley offers Lucas an unusual (some might say, scandalous!) arrangement. She’ll look after the children, read them stories and cook their meals until Christmas, giving Lucas time to find a permanent replacement. Yet, the longer she cares for the family the more she longs to be part of it—whatever the risk to her heart.

Posted by Zina Abbott Author at 7:53 PM No comments:

I've discovered a few trends in my writing over the past five years. The majority of my tropes are second-chance romances; I write mostly as a pantster (loosely translated means I'm a person who writes by "the seat of her pants' as opposed to a plotter, or one who outlines her writing); and my heroes always, always insist on courting their ladies. So, when my hero--Lucas Harmon--in my Love Train release, 'Ainsley' sees a pair of hair combs with blue-colored stones reminding him of Ainsely's eyes, he knows they'd make the perfect courting gift. 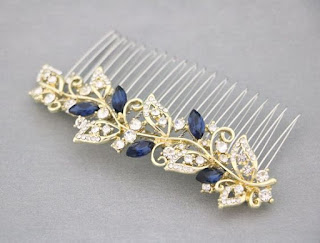 While researching hair combs, I learned these fashion accessories date from earliest times and were created from wood, bones, ivory, feathers, and other natural materials. Sometimes they were embellished with gems or painted with designs. At first, they were flat in construction, but over time they evolved into curved pieces to better fit the shape of women's heads.
During the Victorian era, decorative combs came in handy for pinning into place the false hair needed to achieve the illusion of abundant tresses. By the Civil War, mass manufacturing meant the combs were often adorned with paste jewels, making them within the reach of almost every pocketbook. Large, straight combs, many in graceful fan shapes were the centerpiece, accompanied by smaller side and curved back combs. In coiffure lingo, four teeth or more made a comb a comb. Three teeth qualified as a "hair ornament", while two marked it as a "hair pin".

Hair combs were one of the key items used to adorn women's coiffures and helped them achieve the popular upswept hairdos of the times. Their importance was noted in the 1862 edition of Godey's Lady's Book and Magazine.

"The hair is rolled over a cushion in front, and arranged in a waterfall at the back, round which is twisted a heavy plait. The comb is of black velvet and gilt. The coiffure is composed of a black barbe and lilies of the valley.

Plaits and puffs are also arranged with these combs in endless variety. When worn in the daytime, these small combs are made of light tortoise shell, with a row of small pearls. For the evening they are made of gold, either plain or studded with pearls, coral, steel, gilt, or even precious stones..."

Yet, the same publication encouraged readers to make their own.

"Fancy combs are still the rage, and very economical ones may be made by cutting a fancy design out of cardboard, such as knots, bows, linked rings, etc., and covering them with gilt, steel, or jet beads, and fastening them on a small plain comb."

Initially, combs were widely made of steel, gilt metal, brass, and other types of metals. 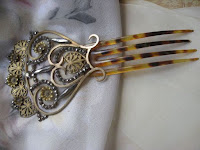 Tortoise shell has been used since ancient times. Its popularity began with the trend of the Spanish mantilla and would remain until it became scarce, being replaced by gutta-percha. 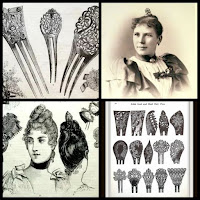 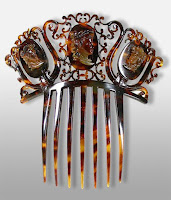 Although tortoiseshell and gutta-percha were popular, the most plentiful and popular material for hair combs throughout the 19th century was probably horn--partly because it was easy to find and cheaper than tortoiseshell. It was also extremely flexible, acting almost like plastic that could be easily cut, bent, stretched, pierced, or carved. Horn also easily lent itself to imitating the popular tortoiseshell pattern. 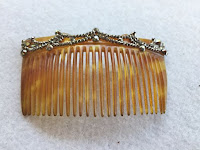 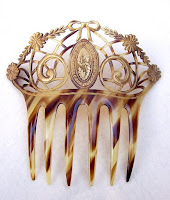 Decorative hair combs of the 19th century ranged from Gothic and Renaissance styles to Napoleonic and Oriental designs. Materials used to create combs also changed so quickly as the styles and what was popular one day was out of fashion the next.
Still...I'd like to believe that Ainsley will love the set of hair combs not only because they are beautiful but because Lucas gave them to her along with his love. 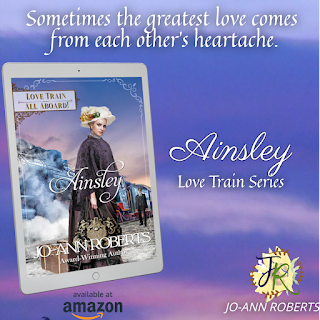 Posted by Jo-Ann Roberts at 3:00 AM No comments: