Look what our authors published in January! 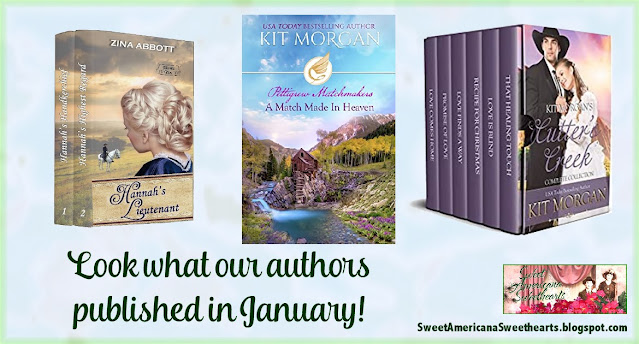 Our authors have been busy writing and publishing books this past month. Here is what we published in January:

With her blonde hair and blue eyes, Hannah Atwell knows she is pretty—and she enjoys pretty things.  She spent her life striving to be the perfect, obedient daughter of a Kansas farm family. Now she feels she is destined for something more than being a farmer’s wife living in a soddie.

At a party held at Fort Riley, Kansas, to celebrate the end of the Civil War, Hannah meets First Lieutenant Jake Burdock, who captures her heart. She impulsively offers him her handkerchief as a token of her regard. As her parents resist her involvement with the Army officer, she begins to question if always doing what she is told is to her advantage. Demands of Jake’s job and missed connections keep them apart. Only the letters they exchange keep them connected.

Hannah stays in touch with 1st Lt. Jake Burdock through letters until they stop coming. While visiting the fort, she meets 2nd Lt. Andrew Call, aide to Fort Riley’s commander. She soon becomes intrigued by him, and he obviously intends to make her his. As Jake Burdock returns to the fort and events unfold, Hannah makes a startling discovery. It soon become apparent some matters are not what they seem.

Will the warning from Hannah’s mother that Army officers amuse themselves with poor country girls but marry women from high society prove true? Will Hannah end up with one of the lieutenants? If so, which one?

A Match Made in Heaven: A Sweet Historical Romance Pettigrew Matchmakers Book 1

Mischief, Marriage and Mayhem, Pettigrew Matchmakers excel at them all! At least that's what Mrs. Pettigrew is trying to teach them ...

Albert Dunst was no ordinary fellow. Indeed, he was so much more. So when he's plucked off the street to be the first student in Adelia Pettigrew's new matchmaking school, he takes it all in stride. After all, he's no stranger to matchmaking. How hard can it be?  A Pettigrew matchmaker is trained to match two people as discreetly as possible and bring them together. He already knew how to do that. There was just one problem. Okay, maybe two ...

Marigold Simpson is seeking adventure, not a husband. She wants to work an old claim of her uncle's and sets out to do it. How is Albert supposed to get her to fall in love with her perfect match when she has no interest in marriage? And speaking of her perfect match, Rand Metcalf's parents won't stop pestering him about taking a wife. Well, he'll dig his heels in and not come within a hundred feet of a female. That ought to show them. He'd marry when he was good and ready and that was that. Poor Albert, what's a matchmaker to do?

Find out in this hilarious new series of sweet, clean romances as only Kit Morgan can deliver. 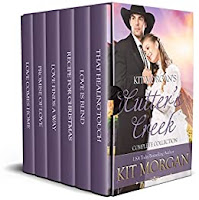 At long last! All of Kit Morgan's Cutter's Creek books in one collection! Enjoy these sweet historical romances as only Kit Morgan can deliver!

That Healing Touch: Jack Carlson spied for the union army for four, long years and what did he get for his trouble? Blindness. Battered by the war and lost without his sight, he seeks refuge in Cutter’s Creek, Montana. There he hopes to heal his bitter heart. But he’s going to need a lot more help than what he can come up with…
Willow Bennett has been in love with the same man all her life. As a young girl she followed Jack Carlson and his friends until they managed to out run her. As a young woman…well, a girl can dream, can’t she?

Love is Blind: Emma Carlson, in hiding from her brother so she could marry a man of her own choosing, kept a watchful eye on those that passed through White’s Stage Stop in case one struck her fancy. And lo and behold, one did! He was handsome. He was strong. He was mysterious! He was also sent by her brother Jack to find her!

Recipe for Christmas: Agatha Shrewsbury has lived with the Bridger family for five long grueling years. More a slave than a member of the family, she finally reaches the breaking point. Will she ever know happiness? Or only toil and ridicule at the hands of her “keepers”?
A lonely man, a desperate woman, one Christmas festival, a mean-spirited family, and …

Love Finds a Way: Elizabeth Cornell dreamed of going on a grand adventure one day. Her husband had been a tailor, and they set out west with their dreams and everything needed to make a new life. Too bad her husband died on the way.

Promise of Love: Merritt Petroff is staring spinsterhood in the face, that is until a stranger shows up in town. Problem is, her matchmaking grandparents (not to mention the rest of the town) can't leave well enough alone. Wouldn't it be better if they let nature take its course?

Love Comes Home: Jonathan Bridger was finally free! Free from the corral of complaint, pettiness and strife of his family. And now that he was, he returned to the only place he knew of to have a fresh start, a life of his own. And when Maisie Woodhouse caught his eye, he thought everything he wanted was now at his fingertips. But then he met her mother …

Maggie Jorgensen knows an escaped criminal is stalking her. U.S. marshal Reg Parker has a solution--send her to Denver as a mail-order bride.
After his passionate kiss, Maggie is confused. Why would Reg send her to another man? And why is her Denver groom missing?


Harry Bradford is a lawyer and sometimes detective. Some call him a bounty hunter. With half of his face torn to pieces toward the end of the Civil War, people turn away from him. He fled his native Indiana where people did not wish to hire anyone who reminded them of the war. He hoped to find among the drovers, stock yards, railroads, homesteaders and trouble-making drifters pouring into Abilene, Kansas, during the hey-day of the cattle drives enough work to provide a reason to keep living.

Stella Schoenfeld, raised in the well-to-do merchant class of Indianapolis, tracks her runaway brother, Nathan, to Abilene. She is desperate to settle their father’s estate so she can move forward with her life. In spite of the warrant out for his arrest related to the incident that left her scarred visibly—and in other ways not visible—she comes to bring him home.

While Harry guides Stella around Abilene, he realizes they have a connection neither would have guessed. Driven by revenge, Harry agrees to find her brother but not for the reason she expects, even though he knows it will cost him the only woman he has ever dared to love.

20-year-old Ruby Gale has a secret.

She’s decided to use a little of the inheritance money she and her brother received following the death of their parents to start a card-making business, just like several of the other women she knows in the small community of Divine, CO. Valentine’ Day is just around the corner, so the timing couldn’t be better. Because some of the married ladies suspect their husbands may not exactly welcome the idea of their wives working, it’s decided that the card-marking activity will take place under the guise of tea parties (which no man would have any interest in attending, after all).

However, once the talk amongst the unwed members of the group - including Ruby - turns to prospective beaus and secret crushes, unsigned valentines begin showing up in the hands of the most eligible bachelors all over town. Rumors and speculations abound, and everyone thinks they know who’s sweet on who. Suddenly, Ruby not only has to sort out the real secret admirers, but also answer the question of which man to give her own heart.

Now that Stella Schoenfeld has been reunited with her brother, Nathan, she returns to their home city of Indianapolis. Much to her chagrin, Nathan is transported home as Harry Bradford’s prisoner. While still in Abilene, she felt drawn to the part-time lawyer, part-time detective—a man many called a bounty hunter. However, now she knows Harry’s purpose for finding Nathan was not so she could convince her brother to settle their father’s estate, but so Harry could collect the reward for Nathan’s return, can she trust him?

Because of the gruesome scars he bears on half his face as a result of being on the steamboat Sultana when the boilers exploded, Harry Bradford has resigned himself to having no connection with women other than to represent them on legal matters. As much as he longs to grow closer to Stella, it is his own grudge against the man who attacked and disfigured her that motivates him to take the biggest gamble of his life. He knows the murder charges against Nathan, who only sought to protect his sister, are false.

During the trial, a startling secret is revealed. After the gossips and newspaper accounts sensationalize her situation, dare Stella ever again show her face in Indianapolis?

While Harry, Stella, and Nathan face the judgment of public opinion, Harry must set aside his own resentments to fight for justice. Can he clear Nathan of the false murder charges? Can Harry gain freedom for his client without losing his heart to Stella?

Posted by Zina Abbott Author at 9:09 PM No comments: