Start of the Transcontinental Railroad by Zina Abbott 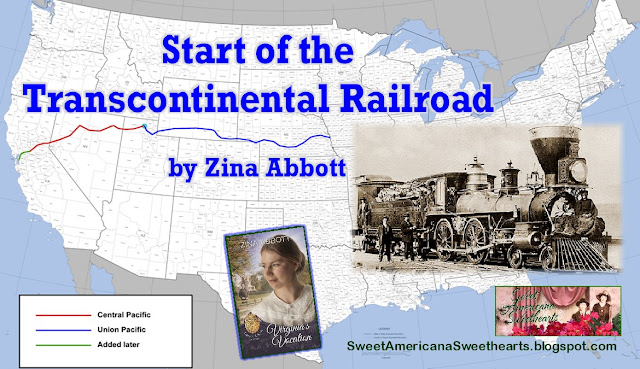 Author’s Note: May 10, 1869 is the sesquicentennial of the Golden Spike ceremony joining the Central Pacific Railroad and the Union Pacific Railroad to create the Transcontinental Railroad. For the next few months, across all the blogs for which I write, I will share pieces of this railroad’s history. It has special meaning for me since one of my ancestors worked on this railroad once it reached Utah. All of these blog posts will eventually be gathered on a page in my own Trails and Rails blog.


The First Transcontinental Railroad (known originally as the "Pacific Railroad" and later as the "Overland Route") was a 1,912-mile continuous railroad line constructed between 1863 and 1869 that connected the existing eastern U.S. rail network at Omaha, Nebraska/Council Bluffs, Iowa with the Pacific coast at the Oakland Long Wharf on San Francisco Bay. The rail line was built by three private companies over public lands provided by extensive US land grants. Construction was financed by both state and US government subsidy bonds as well as by company issued mortgage bonds.

First Support for a Transcontinental Railroad

Building a railroad line that connected the United States coast-to-coast was advocated in 1832 when Dr. Hartwell Carver published an article in the New York Courier & Enquirer advocating building a transcontinental railroad from Lake Michigan to Oregon. 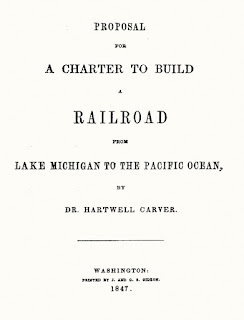 In 1832, an article in the Ann Arbor Emigrant in Michigan, called for a railroad that would span the continent from New York City to Oregon by way of the Platte River Valley--essentially the route that was eventually completed. It was an audacious concept because at that time the Oregon Territory was under British rule, and California belonged to Mexico. A great swell of support for this bold idea grew during the following three decades.

In 1847, Dr. Carver submitted to the U.S. Congress a "Proposal for a Charter to Build a Railroad from Lake Michigan to the Pacific Ocean", seeking a congressional charter to support his idea.

When Whitney returned to the United States in 1844, he realized the benefits from such an undertaking, and spent a great deal of money trying to get the Congress to take up the project. In 1849, he published A Project for a Railroad to the Pacific. For years he continued to write revised memorials and take expeditions through what was then known as Indian Territory to support his cause.

He foresaw a trade link connecting the eastern half of America with its West Coast. Whitney wrote up a plan of action, “A railroad from Lake Michigan to the Pacific” to be built privately with incentives: grants of government land, and railroad-issued, government-backed bonds.

There is evidence from pioneer diaries that Brigham Young, leader of the members of the Church of Latter-day Saints (Called Mormons by their enemies, but called themselves Saints after the pattern found in the New Testament.) while crossing the plains in 1847 and 1848, predicted that a railroad would be built along the Emigrant Trail. He remarked that if the nation did not build it, the Utah Pioneers would, as soon as Utah was granted statehood.

In 1848 The Millennial Star printed a report of two projected railway routes from Council Bluffs to the Pacific Ocean, as described by Asa Whitney. He noted that the proposed railroad was “fraught with interest to the Saints. It will not only pass near their locality but ultimately facilitate the Gathering and lessen the expense of the same. It will open a fresh market for the surplus produce of the saints and furnish employment to laborers and artisans. If it is accomplished, it will constitute a literal highway for the ransom of the Lord. In two or three days, a journey from the Bluffs to Salt Lake may be accomplished, which now occupies many months.”

Utahns were among the first to submit a proposal to Congress promoting a transcontinental railroad. At the first session of the Utah Territorial Legislature in 1851-52, memorials petitioning Congress for a national Central Railroad were adopted. In a letter to Congress in December 1853, Brigham Young wrote, “Pass where it will, we cannot fail to be benefited by it.” Utah settlers gathered in mass in Salt Lake City on January 31, 1854, and made a grand demonstration in favor of the Pacific Railroad.

Brigham Young was one of the very first to subscribe to Union Pacific stock.

The Transcontinental Railroad would have been impossible without the significant improvements made by American engineering experts between 1830 and 1850. They invented the swiveling truck which allowed engines to negotiate turns easily. Equalizing beams spread the weight of the engine to three of the four driving Wheels keeping, keeping the train from derailing on rough tracks. Cowcatchers, T rails, and better lanterns and brakes, were among the improvements. And the problem of ascending steep grades was solved by the invention of the switchback.

Congress agreed to support the idea. Under the direction of the Department of War, the Pacific Railroad Surveys were conducted from 1853 through 1855. These included an extensive series of expeditions of the American West seeking possible routes. A report on the explorations described alternative routes and included an immense amount of information about the American West, covering at least 400,000 sq mi (1,000,000 km2). It included the region's natural history and illustrations of reptiles, amphibians, birds, and mammals.

The report failed however to include detailed topographic maps of potential routes needed to estimate the feasibility, cost and select the best route. The survey was detailed enough to determine that the best southern route lay south of the Gila River boundary with Mexico in mostly vacant desert, through the future territories of Arizona and New Mexico. This in part motivated the United States to complete the Gadsden Purchase.
In 1856 the Select Committee on the Pacific Railroad and Telegraph of the US

The necessity that now exists for constructing lines of railroad and telegraphic communication between the Atlantic and Pacific coasts of this continent is no longer a question for argument; it is conceded by every one. In order to maintain our present position on the Pacific, we must have some more speedy and direct means of intercourse than is at present afforded by the route through the possessions of a foreign power.

The U.S. Congress was strongly divided on where the eastern terminus of the railroad should be—in a southern or northern city. Three routes were considered:

When the Civil War removed the Southerners from the Congressional debate over the route,  the central route was chosen. It was immediately obvious that the western terminus should be Sacramento. In California the "Big Four", Huntington, Hopkins, Crocker, and Stanford, formed the Central Pacific Railroad with their own capital and received government approval to build the rails Eastward from Sacramento. However, the United States government had not clearly determined the railroad meeting point and each company raced to construct as many miles of track as possible to reap the benefits of land grants and government-backed bonds.
The promoters seized a great “entrepreneurial opportunity”. The newly-formed Union Pacific Railroad won the entitlement to build westward from the Missouri River. However, there were  differences of opinion about the eastern terminus. Three locations along 250 miles (400 km) of Missouri River were considered:


Council Bluffs had several advantages: It was well north of the Civil War fighting in Missouri; it was the shortest route to South Pass in the Rockies in Wyoming; and it would follow a fertile river that would encourage settlement. Durant had hired the future president Abraham Lincoln in 1857 when he was an attorney to represent him in a business matter about a bridge over the Missouri. Now Lincoln was responsible for choosing the eastern terminus, and he relied on Durant's counsel. Durant advocated for Omaha, which was chosen.

The Pacific Railway act of 1862 became a reality

The House of Representatives voted for the line on May 6, 1862, and the Senate on June 20. Lincoln signed it into law on July 1. Two companies were hired -- the Central Pacific would build from the west and the Union Pacific from the east.

Besides land grants along the right-of-way, each railroad was paid $16,000 per mile ($9,940/km) that was built over an easy grade, $32,000 per mile ($19,880/km) in the high plains, and $48,000 per mile ($29,830/km) in the mountains. These terms encouraged the companies to construct many extra miles of track, direct the line toward property they owned, and in many other ways exploit the poorly written law to their benefit.
Investors could readily see that a completed railroad across the country would hasten the settlement of the Western lands and that railroad companies could monopolistically control the rates for freight and passengers. The early Union Pacific officials had an even greater view. They pontificated, “The profit is not in operating the railroad but in building it.” The entire enterprise attracted dreamers, scammers, and influence peddlers, giving rise to all manner of skimming, side deals, and corner-cutting.
The railroads created thousands of new jobs and brought thousands of new inhabitants to the West. The entire nation was changed in ways that could not have been imagined.

My most recent book, Virginia’s Vocation, is now available on Amazon. In 1859, when Virginia, escorted by her older brother, Jefferson, travel from Missouri to Ohio, the train that had almost reached St. Joseph, Missouri was the most westerly point served by a railroad east of the Missouri River. This was a mere decade before the east and west were joined by the Transcontinental Railroad. To read the book description and access the purchase link, please CLICK HERE.