The Pinkerton of the West.

We’re familiar with the Pinkerton Detective Agency. I’m one of the authors of the series The Pinkerton Matchmaker. As I was researching law enforcement of the Colorado Territory I came across what was know as the Pinkerton of the West; The Rocky Mountain Detective Agency.
This was a volunteer law enforcement agency created and led by an unusual man who is little known to history. His name was David J. Cook and he is created with personally apprehending over 3000 criminals in his career. 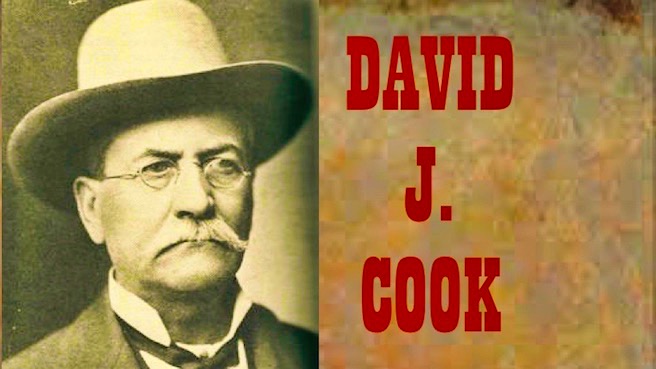 Moving west in 1859 to seek his fortune in the gold mine, Cook spent the war years in counterespionage for the Union Army. After the war Cook was city marshal of Denver, sheriff of Arapaho County, United States marshal, general of the Colorado Militia and founder and chief of the Rocky Mountain Detective Association.

There was no formal training in the West for law enforcement.  You basically pinned on the badge and made it up as you went along. Cook was a natural at discerning who was a criminal. He was fearless and didn’t hesitate to kill. An expert shot and rider, Cook tracked down the notorious Musgrove-Franklin Gang, who were credited with twelve murders.

Cook wrote his memoirs in 1882, Hands Up! or Thirty-five Years of Detective Work in the Mountains and on the Plains. What little I’ve read of it on Google books, it looks to be an interesting, fun read. It’s also available on Amazon for purchase.

Having to learn on the job, Cook developed a set of five rules for protection he used to instruct new agents of the Rocky Mountain Detective Association. I suppose you could say it was the policy manual for self preservation in apprehending criminals in the Wild West.

I. Never hit a prisoner over the head with your pistol, because you may afterwards want to use your weapon and find it disabled. Criminals often conceal weapons and sometimes draw one when they are supposed to have been disarmed.

II. Never attempt to make an arrest without being sure of your authority. Either have a warrant or satisfy yourself thoroughly that the man whom you seek to arrest has committed an offense.

III. When you attempt to make an arrest be on your guard. Give your man no opportunity to draw a pistol. If the man is supposed to be a desperado, have your pistol in your hand or be ready to draw when you make yourself known. If he makes no resistance there will be no harm done by your precaution. My motto has always been "It is better to kill two men than to allow one to kill you."

IV. After your prisoner is arrested and disarmed treat him as a prisoner should be treated — as kindly 'as his conduct will per mit. You will find that if you do not protect your prisoners when they, are in your possession, those whom you afterwards attempt to arrest will resist you more fiercely, and if they think they will be badly dealt with after arrest, will be inclined to sell their lives as dearly as possible.

V. Never trust much to the honor of prisoners. Give them no liberties which might endanger your own safety or afford them an opportunity to escape. Nine out of ten of them have no honor.

Sophie Dawson 's books can be found on Amazon. Her next release is An Agent for Rilla (The Pinkerton Matchmaker #32 coming June 7.
Posted by Sophie Dawson at 8:02 AM