On Day Four (Wednesday, December19th) of our impromptu and exciting journey, we started in the historic town of Casper, Wyoming. Except it wasn't Casper until 1888 when the Fremont, Elkhorn and Missouri Valley Railroads came. There was a fort named after a Lt. Caspar Collins who died in an Indian clash near the Fort Caspar in 1865.

Before that, it was the site where pioneers crossed the North Platte River. Brigham Young ordered a ferry built and left men behind to man it, charging each wagon a dollar and a half. Ron and I spent driving across miles and miles of flat and rolling land west and south. It was so boring for me, I can't imagine every ten-to-twelves miles taking a whole day!

Our Day Three had been so full of wonderful sites, Chimney Rock, Scott's Bluff, and Fort Laramie, I couldn't imagine topping it the whole rest of the way! 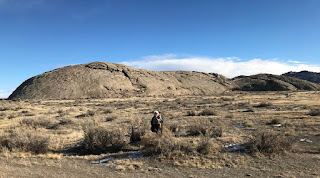 But something about Independence Rock--the only "sight" in a long day of driving--drew me. It touched me deep in my spirit. I could have been one of those courageous pioneers looking ahead and seeing this magnificent sight, after traveling day after day for weeks upon weeks, they finally could stop.

The monolith provided a place to rest awhile, make repairs, and celebrate for arriving by the 4th of July! That's how it got its name. The rock is granite and soars one hundred thirty feet into the sky. It's nineteen hundred feet long and eight hundred fifty feet wide---solid granite, covering twenty-seven square miles. I love rocks, and that's a sight to behold in itself, but its history touched me even more.

It was a long walk out there from the parking lot, but I just knew it'd be worth it. As I approached the rock, I thought about all those tens of thousands of people who arrived in early July between 1840 to around 1868. What a special time! How elated they must have been, knowing they were more than halfway through their journey and making good time. 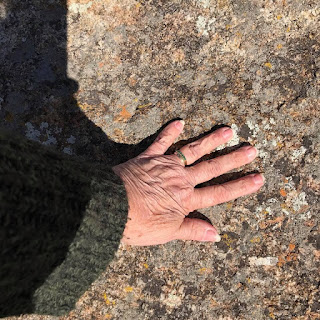 Up close, seeing names carved back when Christina and Reni and the girls came by, something inside me rose and choked me. To touch it was so much more than just touching a rock.

I loved it. I would say it was my favorite site along the Oregon/California Trail. And the information for visitors at the monument is extraordinary!

I learned so much there in the Sweet River Valley where the river meanders alongside the famous rock. That oxen ate some of the ladies clothes that somehow got out of the wagon. 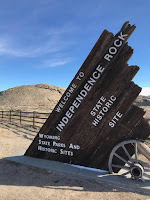 I read that many children were accidentally left behind after the wagon train's "noonies" where they stopped for a mid-day meal and bit of rest.

Dead oxen and wagon wheels had been spewed along the trail. Battling mosquitoes, one lady built a smudge to drive them from the tent, but it ended up driving her out!

It is a State Historic site worth the visit.

Heading on to Rock Springs for the night, we visited the museum there, ending our day. Not a designated Oregon/California Trail museum, but just of the area and the town. Rock Springs got its first mentioned in history in 1850, when the government sent a survey party of U.S. Army to try and locate the best way through the wilderness--Wyoming today--for the covered wagons. 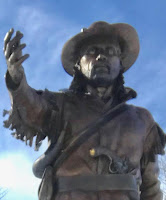 A famous mountain man by the name of Jim Bridger served as their guide. You'll hear more about him in the next installation of Carylin' on the Oregon/California Trail when we visit Ft. Bridger! It's leader, a Howard Stansbury noted on the north bluff the abundance of coal for which the town became known later. In 1968, the first coal mine opened, and the same year, the Union Pacific Railroad arrived in Rock Springs. 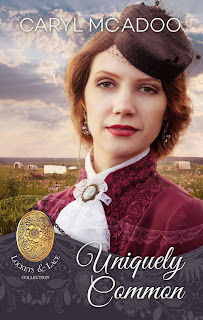 Ten of the bloggers of Sweet Americana Sweethearts have written new stories for its Lockets and Lace Collection series. The connection is still a jeweler in Saint Joseph, Missouri, and my contribution, book twelve--UNIQUELY COMMON--features Christina Adams, its heroine, on the cover. She who is a uniquely common New York socialite never intended to go west.

Though not the "covered wagon type," she finds herself on the journey, motivated by her broken confidence of sizing-up people. Her widowed brother's hireling, Ethan Cord, becomes a person of interest and a challenging game partner. Christina loves to win.

You'll find yourself rooting for her and falling in love. Toward the end of the book, readers meet a new friend on the outskirts of Saint Jo where Captain Albright's wagon train camps. Samantha, Christina's thirteen-year-old niece brings Remi, a young lady with a problem, to the Adams' wagons.

Christina is my April heroine, and Remi, the heroine of my May release. 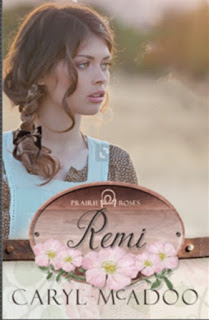 REMI is an avid reader, replacing people with books for her friends. One who gets horribly seasick and refuses to go with her mother when her latest step-father insists on moving to the French Riviera.

She decides to go find her father that she's never met--the one who left before she was even born. The postmark on the last letter she'd received years before was San Francisco, California. Very grateful for the financial help and knowledge of a bondwoman whose contract was about to be fulfilled, she buys Edwina's contract and blows kisses to the mother she'll probably never see again.

She's certain to do well. She'll buy herself a prairie schooner and go west. It'll be a lark . . . she thinks.

Both UNIQUELY COMMON and REMI (Remi in two days, pre-order now) are now available at Amazon and on Kindle Unlimited. Readers who enjoy the first are sure to love the second and have fun on the rest of the trip west to Napa Valley, California.

Be sure to come back June 3rd for Carylin' on the Oregon/California Trail - Day 5!

Do you enjoy books with the same characters revisited?

They've always been my favorite.

Bio: Praying her story gives God glory, award-winning, best-selling author Caryl McAdoo loves revisiting beloved characters in her novels. And her readers are glad she does! She’s blessed that her titles earned over fifty-percent 5-Star ratings and eighty-five to ninety percent 4 & 5-Stars! With forty-four novels (thirty-four in the last four-and-a-half years), it’s obvious she loves writing, but singing the new songs the Lord gives her also rates high. (Listen to a few at YouTube.)
Married to Ron, her high school sweetheart, she counts their four children and eighteen grandsugars life’s best blessings. The McAdoos live in the woods south of Clarksville, the seat of Red River County in far Northeast Texas, waiting expectantly for God to open the next door.