The Wiggins Ferry - A Connecting Point Over the Mississippi River

When I was plotting out the details of Ainsley - Book 8 in the Love Train Series, I knew Ainsley MacKenzie was from Boston. Therefore, she'd need to travel as far as the Mississippi River on regional train lines until she arrived in East St. Louis, Illinois. However, in 1872 there were no railroad bridges spanning the river in that area.
So, how would she get across to the Union Pacific Train 1216 to get to New Hope, Kansas?
Through my research, I discovered the Wiggins Ferry Company. In 1797, Captain James Piggott was granted the right to operate a ferry between St. Louis and the opposite shore of the Mississippi River. Passengers loaded into small hollowed-out tree trunks at Piggott's ferry house just below Market Street and were shuffled across the river by poles or paddles with long sweeps. After a few changes in ownership, Piggott's ferry ended up in the hands of Samuel Wiggins, whose name would be tied to it for than a century to come. 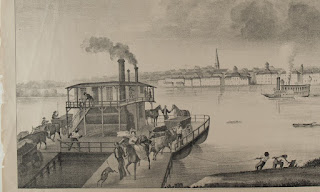 Like the one in this painting, Wiggins ferries had one platform on each side of the pilothouse. Typically, new passengers and cargo loaded onto one side, and outgoing passengers and cargo disembarked on the other.   Missouri Historical Society Collection
Crossing the river in the earliest years of the Wiggins Ferry was a gargantuan task. John Darby, who became the mayor of St. Louis in 1835, moved his family and their belongings across to St. Louis in 1818 over a three-day period and for the fee of $50--no small sum of money at the time. 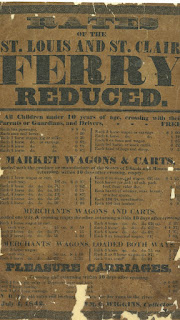 "The ferry consisted of a small keel-boat, which was managed entirely by Frenchmen. Every portion of the body--every muscle, in fact--was brought into play...the vessel rocked so that the trace-chains at the end of the tongue often dipped into the river...so that the enterprise seemed a dangerous and hazardous undertaking."

Mr. Wiggins soon acquired some 900 acres of land along the Illinois banks of the river directly across from present day St. Louis, Missouri. Not only did the ferry company operate a service for individuals wanting to cross the river, but it also developed boat yards, depots, warehouses, railroad tracks, and elevators. Soon, the Wiggins Ferry Company became a major connecting point for the many railroads terminating at East St. Louis, Illinois and St. Louis, Missouri. 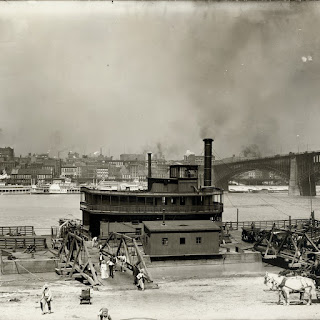 Through the haze of early 1900s St. Louis, the Eads Bridge looms over the icy Mississippi River. Murphy Library Special Connections, University of Wisconsin-LaCrosse.
Winter river crossings in 1839 became easier thanks to the Iceland and its pointed, ice-smashing iron hull. Despite some setbacks--including an 1851 ferry explosion and the loss of four boats to an ice field in 1864--the Wiggins Ferry company kept expanding as did St. Louis. 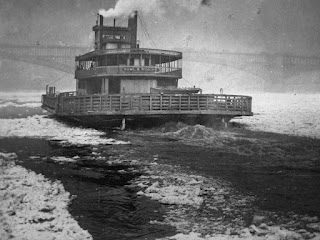 From those small beginnings and makeshift rafts, the Wiggins Ferry Company built an empire transporting people to and from St. Louis. By the 1820s, Wiggins had a fleet of ferryboats with names fit for battleships, such as the Sea Serpent, Rhinoceros, and Antelope. He even experimented with ferries by horses on treadmills. In 1830, the company upgraded to steam power, with the St. Clair and the Ibez ferries making two regular daily river crossings. By the early 1870s, the company was averaging river crossings of 1,500 people, 10,000 bushels of coal, and 750 wagons each day.
The company's stock reached $1 million just as the Eads Bridge, St. Louis's first bridge across the Mississippi was rising in the middle of the river. As the bridge would not be completed until 1874, I had my answer!
The Love Train series is now complete! Penned by ten best-selling and award-winning authors, each book is a stand-alone romance that you don't want to miss!

Posted by Jo-Ann Roberts at 3:00 AM No comments: 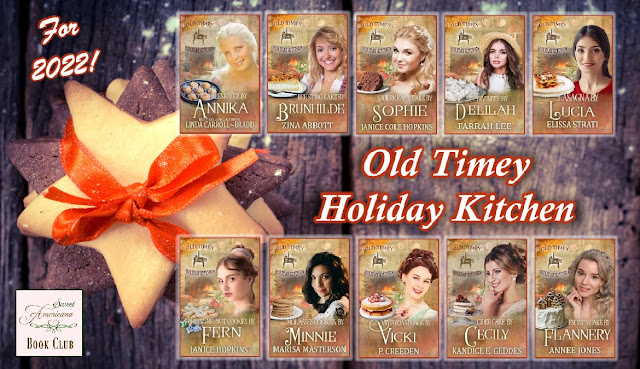 Have you found our Old Timey Holiday Kitchen series books for 2022 yet? This series is sponsored by the Sweet Americana Book Club on Facebook. Several of our blog authors are writing for 2022. Here are the individual titles with their covers, plus links for most: 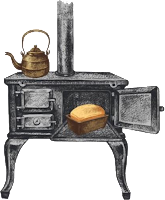 She is being flattered by two handsome men, but guilt plagues her.

She just arrived from Germany. What does a holiday about English pilgrims have to do with her?

Can her recipe for a sauerkraut cake show her what she should do?

Delilah has divinity on her mind along with the man she is in love with.

Will the man the family priest arranged for her to marry appreciate her cooking?

Which man will end up not forgetting her?

She has siblings to provide for and he has a broken heart that needs healing.

Will two broken hearts find renewal and healing, or will secrets only further destroy them both?

Does she stand a chance of winning this year's holiday baking contest and the heart of the man she loves?


You will also find all of our Old Timey Holiday Kitchen books on the series page by clicking on the tab at the top of this blog. The tabs are located under the blog banner.