Have you ever wondered about ocean and river travel in the 1800s? I had the wonderful experience of participating in a project with some other authors recently that had me doing some research on the subject.

History books tell us that the oceans of the world have been navigated for centuries. It seems so scary to me to think of a boat full of men using the wind to carry them across a stormy sea. Ocean travel has been done for years to trade or explore and of course in war. In the nineteenth century wooden ships started being replaced by iron and steel ones. Sails were replaced with steam engines. 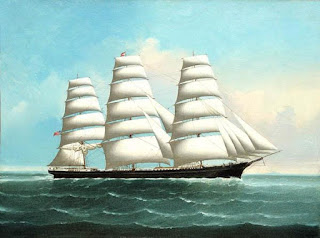 One of the most dangerous jobs on an early ship was the rigger. The job was done high up in the sails where the footing was slippery and unstable. The rigger was responsible for releasing the sails at just the right time to catch the wind and propel the ship forward. Many riggers were lost at sea doing their jobs when they fell from their position high above the decks.

Life on board ship for a sailor was exhausting and physically taxing work. A sailor had to be tough to survive the difficulties they faced. They were kept busy by officers to reduce the chances for trouble. Since being at sea for long periods took a toll on emotions, keeping them busy kept them from getting into fights and causing trouble. A busy crew normally meant higher morale in the ranks and the chance of a mutiny was much lower.

Cabin boys on a ship were there to run errands for the officers as they needed. He also delivered messages all over the ship. A cabin boy’s main job was to serve the captain, though. Anything the captain needed the cabin boy knew how to get it done. During the nineteenth century boys took these opportunities to escape bad situations or find work when jobs were scarce. And sometimes boys as young as ten years old were kidnapped and put to work on the ships. They worked long hours and were almost always on duty or on call.

Another job for younger boys was the position called powder monkey. The title comes from the British Navy, but the job was necessary for all war ships. The responsibility of the powder monkey was to deliver gun powder from the magazine to the guns. Sadly, many of the boys in this job were forced to do it. 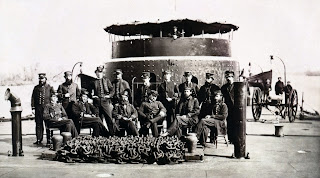 Ships usually had a cook, a surgeon, and a parson to meet the physical and spiritual needs of the crew. The general crew included a boatswain who was in charge of maintaining the sales. Obviously this position became obsolete with the introduction of the steam engine. Deck hands carried out most of the other duties, such as handling sails, caring for ropes, and cleaning decks. Keeping watch at all times was important to the safety of the ship, cargo, and crew against pirates. All crew members took turns at watch.

The captain and his officers were responsible for navigation and managing cargo on board. The captain set the tone for the operations and his officers carried out his orders to the letter or they risked being punished and eventually kicked off the ship. 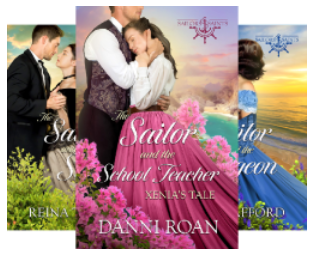 So the life of a sailor at sea wasn’t as romantic as it seems like it could have been. But after their time on the ocean was done, they started a new life in the Sailors and Saints Series. And in this sweet and fun series the sailors found true love.

Find the Sailors and Saints series on Amazon!

Follow Annie on Amazon, Bookbub and get email updates.
Posted by Annie Boone at 1:30 AM