Look What Our Authors Published in March! 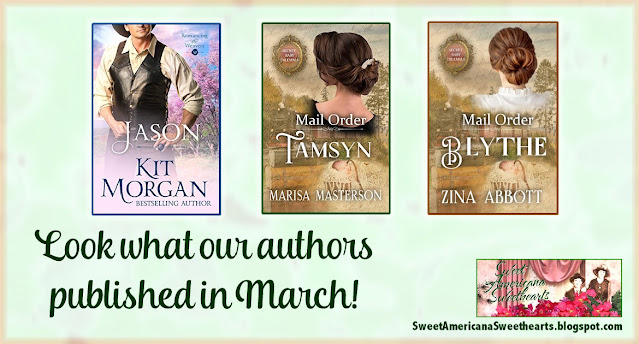 Our authors have been busy writing and publishing books. Here is what we published in March:

A man not looking for a wife.

A woman on the run, not looking for a husband.

What happens when they wind up together?

Marrying was the last thing on Charlie George’s mind. But it was also her father’s dying wish she find a husband. So, after his funeral, off to her spinster aunt’s she went. But her aunt wasn’t picky, and ... She ran and ended up married to someone else! But Jason Weaver wasn’t like any man she knew, and she wasn’t what he expected either. Would he keep her? Or toss her aside?

Tamsyn Glasson has a secret. Hopefully, the man who invited her west will marry her before he discovers it. Otherwise, where will she go?

Blythe worked as a maid for a Chicago family until the lecherous son returned home. Becoming a mail order bride provides her best option for escaping his unwanted attention, but she soon realizes she did not escape soon enough. The sergeant stationed at Fort Steele in Wyoming is her last hope, but he must get permission to marry from his commanding officer first….Eli Morgan, a science instructor at the University of Iowa and amateur astronomer, travels with two friends to Rawlins, Wyoming to view the full solar eclipse. On the way, he finds an auburn-haired woman as beautiful as a solar corona.

Samantha, recently graduated from law school, is aware legal opportunities are limited for women….entering into a business partnership with an established attorney is her best option….She is thrilled with the advertisement from an attorney seeking a partner….Linton has a growing law practice but as a widower with two young daughters, he needs help. Hoping to attract a woman of intelligence, he draws on his legal training and uses a play on words in his advertisements.

Posted by Zina Abbott Author at 1:30 AM No comments: