Bad Guys
The American West is known for its wide open spaces, pioneers who courageously went across the country to settle the land, but it is also known for its lawmen and outlaws.
But what happened to send these guys on the path of destruction.
Everyone has a story.

He was a dentist at 21.
His mother had died of tuberculosis and he'd taken care of her during the contagious stage of the disease. Who knows if we would have ever known his name if he hadn't contracted the disease? But after being diagnosed, he went west to Dallas. Teamed up with a dentist friend of his father and won awards for their dental work.
But the tuberculosis worsened and soon he was forced to quit and go farther west. The rest, shall we say, is history.
He met up with Wyatt Earp and other notorious friends and his name is well known to those who enjoy reading about the American West. 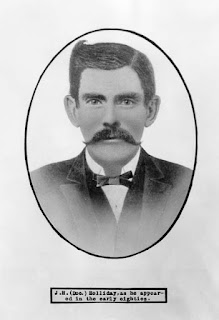 As writers, we write about heroes and heroines and bad guys. We write about their stories, and what turned them to the crooked trails of their life. In the American West, many of the outlaws were effected by the Civil War.
Think Frank and Jesse James. Belle Star.
Interesting is the fact that some outlaws became lawmen and some lawmen became outlaws.
But one thing is for sure, they took a crooked trail.

My latest book is Sadie  Book 1 of the Prairie Roses Collection.
Sadie


Sadie Bluhm receives the letter to confirm she had been chosen to be the mail order bride for Conrad Frazier in America. She is delighted. Growing up an orphan, Sadie relishes the idea she has been chosen to belong to someone. 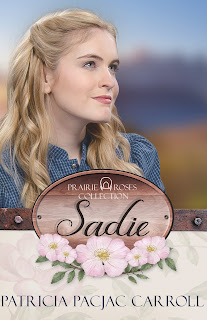 Sadie
Conrad lost his wife six months ago. Desperate to find another, he enlists the help of an agency to find him the proper German bride. He needs a wife to continue onto California with the company he has signed up with. He will marry this Sadie, but she will not have his heart.
Will her hope be enough to triumph over his bitterness?

Have a blessed day!