How Fast Could You Travel Across the U.S.?

Today, we shrug off the convenience of long-distance travel as part of life, but it wasn’t that long ago that simply getting there required a huge investment of time and money. 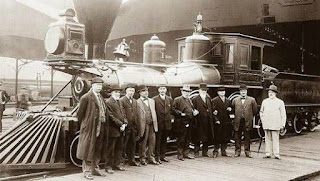 The experience of traveling can often feel frustratingly slow.  But despite the traffic jams on the roads and congested airports, we don’t know how good we have it today compared to our great-great grandparents.
In this age of instant digital communications and fast travel, we tend to forget that not so long ago traveling distances were subjectively very different.  In the 1800s, for example, traveling a few hundred miles across to the U.S. meant taking a steam-powered train, and the trip could take days.  Going from coast to coast, which now takes less than a day, could take weeks. 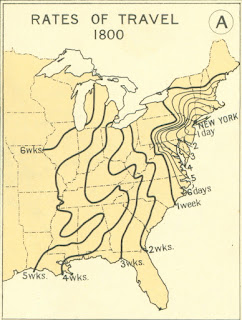 The best way to understand how fast one could travel across the country back in those simpler, but slower, times is these maps from the 1932 Atlas of the Historical Geography of the United States.  All the maps use New York City as a starting point on the East Coast, and show how long it would take to move westward across the country.
As you can see in the map above,  in 1800, it took a whole day to barely get outside of the city; two weeks to reach Georgia or Ohio; and in five weeks, you could just about get to Illinois and Louisiana. 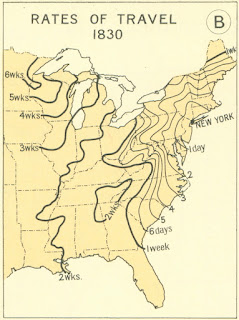 About 30 years later, in 1830, train travel in the U.S. was almost twice as fast (a huge improvement!), but still quite slow by modern standards.  Rather than taking two weeks, going to Georgia or Ohio from New York City took one week, and in two you could get to the state borders of Louisiana, Arkansas and Illinois.  Getting to Minnesota would have taken about five weeks. 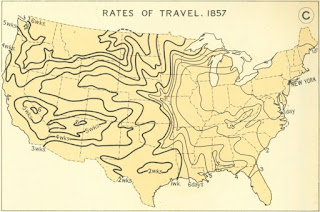 I’m sure you noticed the major change in the map above. By 1857, which is still within one lifetime from someone born around 1800, travel by rail (the fastest way to get around at the time—remember that the Wright brothers were not even born yet and air travel was far off in the future) had gotten significantly faster.
You could now do in a day or two what used to take a couple weeks.  With a week’s travel you could get to the eastern border of Texas, and in about four weeks you could get to California. Only the Northwest took longer than a month to reach from New York City. If the latest map wasn’t a big enough step forward for you, take a look at this one from 1930. It now only takes two days to get across half the U.S. states by train, and three to four days to get to the other coast from New York City.  It’s hard to overstate how big a difference this makes in how people perceive the world. There’s a big difference, both for families and businesses, between spending two months traveling back and forth across the country vs. less than two weeks!

Thanks to the University of Nebraska for providing some of the information referenced in this article.