Bathing in the Good Old Days ... 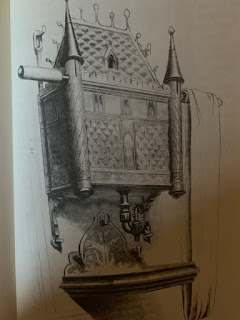 Hi, Kit Morgan here and today I want to talk a little bit about taking a bath!
Back in the good old days, depending on what century and decade, the bath was a misunderstood thing. But I don't want to get into centuries-old folklore of the ritual. Instead, I want to concentrate on the mid to late 1800s. Of course, by then people did take baths however, getting one could sometimes pose a problem.

Other people capitalized on bathing. In the 1890s there was a stage star, Cora Pearl, who liked to bathe in champagne. A ladies magazine at the time advised ladies with blonde hair to wash, though not necessarily bathe, in hock and brunettes in Claret. Let's hope they didn't have the keys to their husband's wine cellars.

These strange bathing rituals drew the attention of lunatic inventors. Their nutty ideas ranged from practical if weird
devices, to the wildest surrealist fantasies. They were especially prolific in the fields of folding, collapsing and portable gadgets, not to mention disguising them as something else. Many of these novelties were fun for a while but none of them lasted.

One such device was the bag bath. It had a collar that could be tightened around the bather's neck, then water was poured through a funnel inserted near the shoulder. It would then leave the bag from a tube at the foot of the bag and into a tub. Presumably, the outlet could be stopped up to give a prolonged soak to the person wearing it, instead of the continuous flow. Just think if they had something like that today! Yikes!
It was said of the bag bath in a magazine in the late 1800s: The bather can gradually subside into the recesses of the rubber sack while he divests himself of his apparel. Moreover, a pair of indiarubber armlets, terminated by rubber gloves, can be provided. Thus the person may receive visitors, or write, or read the newspaper with decorum. Double Yikes! 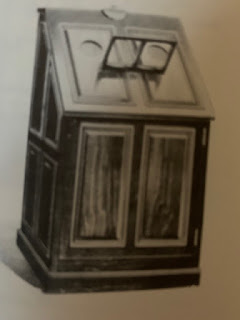 Some folding and combination bathing furniture was fairly sensible. The American wardrobe bathtub of 1895, for example, had a gasoline heater and was a good answer to the space problem. The Montgomery Ward mail-order catalog offered more folding tubs than normal ones. There is also something called a Russian bath or a combined vapor and hot air bath. Hot pipes prevented the steam from condensing. There was also a portable Turkish hot air bath.

I'll take a nice modern bathtub, thank you very much!

Until next time, I hope you enjoy your bathing. In an actual bathroom. And not in bed in a bag like the man in the picture above.