Look What Our Authors Published in April! 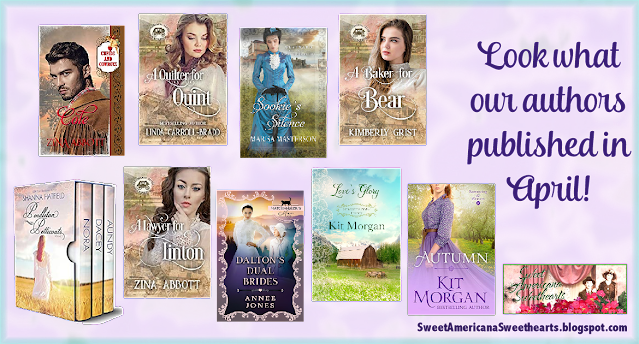 Our authors have been busy writing and publishing books. Here is what we published in April:

Indulge in the romance of a bygone era with three incredible pioneer women.

This boxed set contains two novellas and a full-length historical romance from the Pendleton Petticoats series including Aundy, Dacey, and Nora (Gift of Grace). Strong-willed, courageous women encounter the men who capture their hearts in these sweet western romances full of heart, humor, and hope.

♥ Nora - Ready to begin a new life far away from the dark memories of the Civil War, J.B. and Nora Nash head west and settle into the small community of Pendleton, Oregon.

♥ Dacey - A conniving mother, a reluctant groom, and a desperate mail-order bride make for a lively adventure.

♥ Aundy - Desperate to better a hopeless situation, Aundy Thorsen leaves behind city life to fulfill a farmer’s request for a mail-order bride. A tragic accident leaves her a widow soon after becoming a wife. Her stubborn determination to succeed upsets a few of the neighbors, including Garrett Nash.

Samantha, recently graduated from law school, is aware legal opportunities are limited for women….entering into a business partnership with an established attorney is her best option….She is thrilled with the advertisement from an attorney seeking a partner….Linton has a growing law practice but as a widower with two young daughters, he needs help. Hoping to attract a woman of intelligence for the lawyer who needs a new wife, Judge Barnes draws on his legal training and uses a play on words in advertisements.

The matchmaker’s files indicate that Dalton Sweetland was matched with a “J. Knight,” but Maggie can’t seem to locate the woman’s address to contact her. She takes out an ad in the newspaper looking for a marriageable lady named “J. Knight”, but TWO Miss J. Knights come knocking at her door ready to claim the golden ticket.

May the best bride marry the cursed cowboy...

A Mysterious Mountain Man
Some Outlaw Caves
And One Spinster’s Insatiable Curiosity ...

Lucinda Mae Stone had a problem. ...Aside from the fact she was staring spinsterhood in the face, she was of a curious nature. So when a mysterious mountain man shows up in town claiming he’s tracking Grandma Waller’s big friend, Mr. Markhel, her curiosity is up and running. Mr. Markhel was mysterious enough, and she was dying to get a chance to speak to him. ...she ends up getting more than she bargained for and then some!

Autumn Weaver didn’t believe in love at first sight. She met Livingston “Al” Jones a handful of times. Hardly enough to draw any conclusions about the man. But her heart thought otherwise and was doing its best to convince her. But what was the point? Didn’t her heart realize the man had left the area and wasn’t coming back?

So, when her mother suggested she take a trip to Clear Creek to find a husband, Autumn began to see it was her only option if she didn’t want to become a spinster. Then the unthinkable happened …

Posted by Zina Abbott Author at 1:30 AM No comments: