Look What Our Authors Published in June! 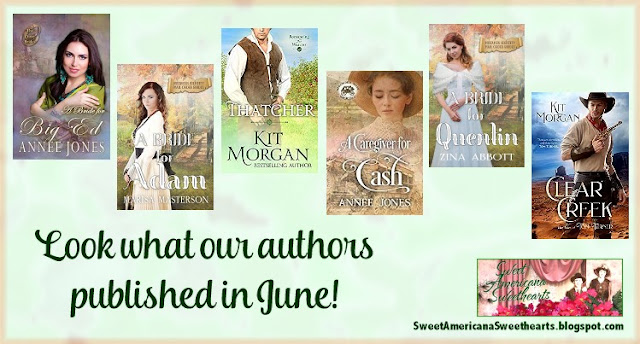 Our authors have been busy writing and publishing books. Here is what we published in June:

An injured woman - A man in need of a wife - And four bumbling villians ...

Alice Fairchild was a spoiled, rich young woman who didn’t care a whit about anyone or anything. Her family was wealthy, powerful, and known for going through servants like water through a sieve. And every servant in Seattle knew once you were fired from the Fairchilds, you weren’t likely to be hired anywhere else. Is it any wonder some of those servants wanted revenge? But when Alice is abducted, things don’t go as planned and her abductors lose her! And who should come along and find her? A Weaver of course! Unfortunately, she can’t remember a thing. Enjoy this fun, sweet western romance full of love, laughter, and Weavers!

There are storytellers, and then there’s Tom Turner!

Enjoy this collection of tales of the old west, some with a few surprises! Tom has lived a full life so has a lot of stories to tell. Nearing his 100th birthday, he’s trying to tell as many of them as he can. Problem is, no one believes him! They think he’s making them up. But when the rest home he’s in hires a new attendant, he finds a listening pair of ears that begin to hear the real tales being told. Will she believe the magic and wonder his stories hold? Find out in Tom’s first set of tales of adventure, laughter, love and a little something special.

Not all our authors put their books up on preorder. For those who do, advance sales go a long way to help their rankings on Amazon. Please consider buying before the book is releases.

Widow Grace Donegan is no stranger to hardships. With winter coming on, and with the impending loss of her home as well as her job at the café in New Hope, Kansas, she has three options: give up her two children, join Miss Jennie’s girls at the Rhinestone Saloon, or condemn herself to a second loveless marriage. So when an opportunity to save her home arises, she agrees, never imagining her salvation would arrive with a set of broad shoulders, a charming smile, a kind heart, and a pair of blue eyes making her wish for things long forgotten.

Raised in a Pacific Coast lighthouse, Lisbet Dinesen hopes to follow family tradition and succeed her father as senior lightkeeper. Assistant lightkeeper Hale Warwyck feels he’s paid his dues by working the night shift for five years and deserves command of his own lighthouse.

Chief Lightkeeper Anders Dinesen announces the need for a substitute during his vacation time. Both Lisbet and Hale want to step in. A challenge is established to test their suitability and skills. Has Anders taken on the role of matchmaker for his eldest child? Will the competition drive a wedge into Lisbet’s and Hale’s budding attraction?

Selah Anderson agrees to participate in a matchmaking service organized by her pastor and the orphanage's matron, where she spent most of her life and become a mail-order bride. The man of her dreams will share her love of creating delicious confections and running a successful bakery. People will come for miles to purchase her specialty-shoo-fly pie.

Stagecoach driver Emerson Clark isn’t looking for love. But he knows life is better with a partner by your side- like a good team of horses supporting one another around the ruts in the road and along the narrow paths. As long as she’s practical, he’ll be happy.

Can his mail-order bride handle the diversity that comes with her husband’s dangerous vocation? Together will they blend their opposing desires to create a recipe for love?

1889, Chicago.
It’s Christmas and Charity DeWitt is celebrating her engagement to recent medical school graduate Dr. Fox Skilling with a Charm Cake – a cake that contains symbolic charms crafted by her father at his jewelry store. When her slice contains a fleur-de-lis, she’s certain the tiny silver symbol of new beginnings has to do with her upcoming wedding to Fox – or does it? When he announces his plans to go out west to open a medical clinic, she journeys with him to Oregon where she meets Peter Abrams, a schoolteacher partially paralyzed after being thrown off his horse. Why is she so drawn to Peter and his books? Is it just because she’s never learned to read? Or could it be more?

Find out as you read this heartwarming holiday romance set in Sunset Hills, Oregon!

Madeline Denham realizes something doesn’t add up. More than with her siblings, her parents are very careful about who they allow to socialize with her. There are those who study her as if they know something she doesn’t. Approaching her twenty-second birthday, she is painfully aware she has never been courted and never been kissed.

After graduating from normal college, she accepts a teaching position close to Knights Ferry. Much to her dismay, during a community social, a well-dressed man she's never met before asks her to dance and then forces a kiss upon her. Rather than being flattered, she feels ruined.

After purchasing land east of Oakdale, James Hennessy, like his Italian mother’s side of the family, finds growing fruit trees and a small table grape vineyard competes with his love of practicing law. At a dance, he meets a delightful woman who reminds him of his Italian heritage. When he realizes she is the object of unwanted attention, the fiery Irish from his father’s side comes to the fore. He steps forward to rescue her. He soon finds himself representing members of her family in a cause important to his own interests—stopping the hydraulic mining that is clogging the Valley’s rivers and streams that provide the water the farmers need to irrigate their crops.

Madeline hires James to uncover the secrets that plague her. However, will what they learn drive him away? Fortunately, she has two young twin brothers, who, like their oldest brother, want to become cowboys. For now, they’ll settle for corralling a good husband for their big sister, even if they have to rope and hogtie Madeline and James to get them to the altar.

A Bride for Devlin: The Sheriff's Mail Order Bride Book 6

Searching for her sister, Dolly, who left behind a letter stating she was traveling to Wyoming to marry a rancher, Carrie Watson travels to Baggs Station. She learns, except for a few items of clothing she packed in a tow sack, Dolly left her trunk behind at the station for safe-keeping and departed with a man who claimed he was sent to bring her to her intended.

Carrie asks to be directed to the sheriff, only to learn the Carbon County sheriff is seventy-eight miles away in Rawlins. However, the Little Snake River Valley ranchers, frustrated by the increase in cattle rustling, pooled their funds and hired their own local sheriff, Devlin Anders, to track down the culprits.

Devlin Anders, frustrated over his lack of success in locating the rustlers, is ready to quit and stick to running his own ranch. Then, his friend, Jesse Hardin, begs him to help search for Jesse’s missing bride. They travel to Baggs Station, the last place she was spotted.

The last thing Devlin needs is an upset, headstrong woman from the East demanding help to find her sister. However, when he learns Dolly left on the back of a horse behind a man Devlin has been trying to catch up with for months, he knows it is time to raise a posse and go after both Lem Coker, suspected cattle rustler, and Jesse’s missing bride.

If only Carrie did not insist on trailing behind them…

Can a spirited pastor’s daughter up the ante, causing a card-playing, cigar-smoking workaholic to wager his heart?

Mercy Fairchild, a sheltered pastor’s daughter, is ready for adventure. She’ll comply with her late father’s last wish—to obtain the help of a matchmaking service and find her a young pastor out west to marry. Yes, she wants God’s perfect plan for her future, but she hopes it will be an exciting plan. Perhaps a missionary in a new territory?

Widower Ace Caldwell’s unruly children make keeping a housekeeper impossible. The last one left in less than a week! If he could only be as good a father as he is a card player! But with his job as a railroad detective, he can’t be home more than a day or two each week. At least a wife would be legally and morally vested to remain. Wouldn’t she?

1890, Baltimore.
19-year-old Patience Sutton has never been praised for her cooking – in fact, she burnt the pumpkin pie at her family’s last Christmas celebration. As the youngest of 10 children, she’s tired of always being the baby and longs to grow up. When she spies an ad in the paper from Oregon banker Jefferson Cooke seeking a mail-order bride willing to travel out west and who “must love children,” Patience jumps at the chance for a new life. With children of her own to take care of, maybe she’ll finally get some respect! Right?

Posted by Zina Abbott Author at 12:09 PM No comments: