Aloha all! This is my first post on Sweet Americana Sweethearts! Thanks for having me!! I think I'm going to 'name' my Wednesday column... but I'm not sure 'what' to name it. Western Women - Women of the West - Wild West Women? Hmmm I'll have to think about it.  If you have an idea, or a favorite option from my list, please comment here on this post or message me at reinatorresauthor{at}gmail.com

I'm a bit of a Civil War buff... and strangely enough I have some friends with similar or complimentary interests. So I'm going to share with you some information about American postage and mail in the Civil War era of American History (1860s and forward) 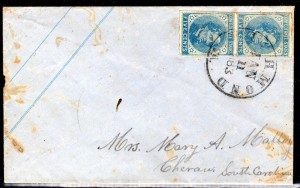 When setting a story in a period of history other than our own, there are so many things to consider. Everything has a history of its own. Not all of it will end up in the story, but research of any kind can helpd to make the setting feel real to the writer and hopefully the reader.

Something as simple as the stamp on an envelope had a detailed history of its own.
My friend, Gannon, is a philatelist of the highest order and someone I've known since kindergarten. And this information comes from his research. I am truly grateful to have such an amazing friend.
“So this cover is an “adversity” cover. Commercially made envelopes were available in the South prior to 1861, but they became less available as the war progressed for a variety of reasons. People would make envelopes out of whatever they had on hand. Letters sent in envelopes hand made from sheet music, wallpaper, or (as in this case) old ledger paper. Sometimes, people would also “turn” the envelope by steaming open all the sealed edges and resealing them so that the original stamp and address were now on the inside of the envelope. That particular practice is not limited to wartime. Poorer people did this throughout the 19th century and sometimes even today. 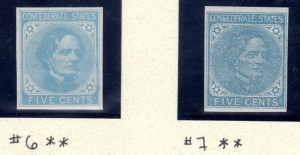 “The stamps on this letter are referred to by collectors in the United States as “CSA Scott #7” (The Confederacy printed 14 stamps, of which 13 were actually issued.) This printing plate for this stamp was created in England by Thomas de la Rue & Co., which is still in operation as a security printer. They filled the order for however many stamps they were contracted to print, and then sent the stamps and the copper printing plates to the Confederacy. The stamps printed in England are referred to as “CSA Scott #6” (England) as are a different shade from #7 (CSA).
“About half of the English printed stamps and half of the printing plates were seized by Union forces as they tried to run the blockage. The other half got through. The Confederacy then used the plates to print new stamps until the plates wore out.
“This letter was sent from Richmond, VA, to Cheraw SC on January 11, 1863. Cheraw is a pretty small town, which had less than 1000 people in the 19th century. I am researching the addressee. It may be the sender was someone in her family who was at the Battle of Fredericksburg, but I am not sure.” 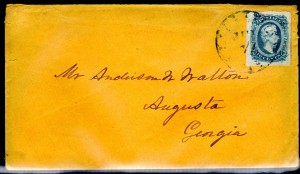 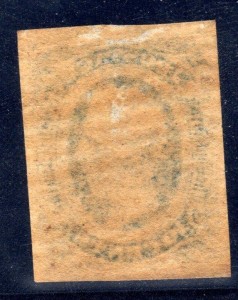 “This one has CSA #11 on it, the stamp most commonly seen on CSA mail. It was issued in 1863. Not sure what information I can get from it with an unclear postmark. I think it was sent from Fayetteville, GA to Augusta GA. It could also have been sent from Milledgeville. Either way, the letter is postmarked June 11. It is likely to have been mailed in 1864, because of the way the postmark is worn down. June 11 1863 is a possibility, but June 11 1865 would have been after the war.”
Another Interesting Fact –“When you get an unused stamp from the CSA–other than the English printed ones–the gum on the back is really uneven. They were manually applying it with a paintbrush. Neat detail!”
Thanks for taking the time to read this post -