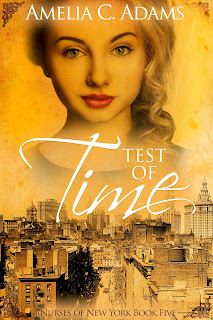 Today's Blog Tour Tuesday features Test of Time, the fifth and final installment in the Nurses of New York series by me, Amelia C. Adams.

Back Blurb: Jeanette's course of study in New York is almost over - in three weeks, she will graduate with her nursing certificate and return home to Topeka, where her fiance, Dr. Phillip Wayment, has been waiting. But she's been gone for six months, and so much can happen in six months. She's changed since she left - what if he doesn't want her anymore? And has he changed too?

When I first introduced the character of Jeanette in book three of Kansas Crossroads, The Dark and the Dawn, I didn't realize that she would become one of my most popular characters ever. In the Nurses of New York series, we go with her to New York and meet her fellow nursing students, and then in this book, we see the conclusion of her relationship arc with Dr. Wayment. Many of my readers were concerned that their ending wouldn't be happy. I won't give anything away, but I will say that this book was a lot of fun to write.

There won't be any further books featuring Jeanette as a main character, but she will pop up from time to time in future Kansas Crossroads books as she works with Dr. Wayment as his nurse.
Posted by Amelia Adams at 9:54 AM