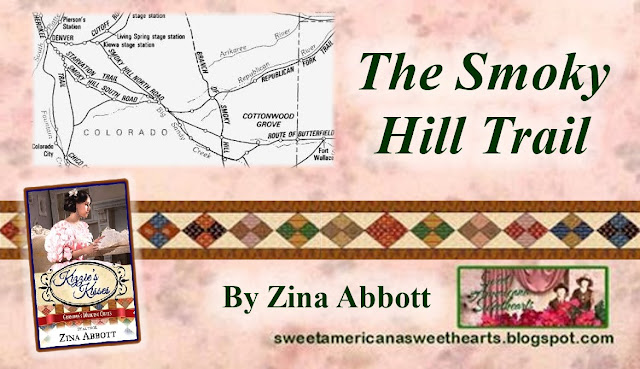 In my studies over the years I have heard of the Oregon-California-Mormon Trail and I have heard of the Santa Fe Trail. I have also heard of the Natchez Trace and the Great King’s Highway along the Atlantic Coastal states. It was not until I started researching for my latest novel, Kizzie’s Kisses that I learned of the Smoky Hill Trail.

The Smoky Hill River which gave the trail its name was called by many names over the years It was well known among the Plains Indian tribes like the Pawnee and Cheyenne. Early French and English explorers originally called the river the Padoucas. It was believed the river came by the name it is known by now either because of the hazy, smoky appearance of the nearby dark shale hills. Also, a large stand of cottonwood trees along the river near what is now the Kansas-Colorado border known as Big Timbers had the appearance of a dark cloud of smoke when seen at a distance. It was to this grove of trees Black Kettle of the Cheyenne brought the survivors of the Sand Creek Massacre in 1864.

Lt. Zebulon Pike of Pike’s Peak fame explored it in his 1806 expedition in which he also discovered the mountain peak that now bears his name. In 1842, 2nd Lt. John C. Fremont with Kit Carson as a guide, traveled along the River on his way back east from his second expedition to map the trail to Oregon by way of South Pass. After losing most of their supplies and records made of the journey due to sudden flooding of the Smoky Hill River, the expedition of twenty-six almost met their end at the hands of hostile Pawnee who resented the intrusion of white men in the region of their buffalo hunting grounds. Only the friendship of the Loup band and their influence on the rest of the Pawnee prevented a massacre.

Other plains tribes including the Southern Cheyenne were aggressively protective of the Smoky Hill River and their trail along its banks as it was an important place for hunting buffalo. A herd of buffalo crossing the river could easily drink it dry in a given location. The tribes that depended on the buffalo for so much of their sustenance fought hard to keep out white settlers whose cultivation of the land destroyed the grass needed by the buffalo. Also, their presence lowered the river levels because rain absorbed in the cultivated soil did not drain into the streams and rivers.

The Smoky Hill Trail, originally an Indian trail like so many others adopted by those whose ancestors came from Europe, came into prominence in 1859 with the discovery of gold at Pike’s Peak in Colorado, followed shortly by more gold discoveries along Cherry Creek in what is now the Denver area. As gold-seekers sought the fastest route to the gold fields, many risked frequent Indian attacks by taking the Smoky Hill Trail which cut off about 120 miles as compared to traveling the more-established California-Oregon-Mormon Trail along the Platte River. Since most exploration west started at Kansas City or St. Joseph along the Missouri River, traveling the Platte required going north along the Blue River, then cutting back south to Denver on the west end. The Smoky Hill Trail, in spite of its dangers from hostile tribes and its long, waterless stretch west of the headwaters of the Smoky Hill River that came to be known as the Starvation Trail, was a more direct route. 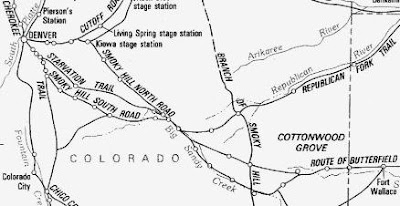 The Smoky Hill Trail began in Atchison, Kansas, about thirteen miles north and west of Kansas City. Because of its excellent wharf, goods traveling not only up the Missouri River, but those traveling down from points north and west were off-loaded and made available for shipping west along the trail.

As gold-seekers moved west, they were soon followed by merchants and freighters eager to provide the basic supplies and luxuries desirable by those who struck it rich—or even found enough gold and other precious metals to eke out an existence requiring food and clothing. My story in Kizzie’s Kisses starts in 1862 when my heroine, Kizzie, is fleeing from an Indian massacre that took place in the spring of that year. In an effort to get help to save her family, she rides east along the Smoky Hill Trail towards Fort Riley. Along the way she runs into my hero, Leander Jones, a guard on an oxen-driven freight train traveling west along the Smoky Hill Trail with Pike’s Peak and Denver as the destination.

It is also along the Smoky Hill River and Smoky Hill Trail that in the next two decades several frontier forts and cattle towns emerged to populate Kansas from east to west, first as the Butterfield Overland Despatch traveled the route to bring passengers and goods to Denver, followed by the railroad that closely followed the trail, the river and the towns (many which had originally been frontier forts) that had been establishes along this trail that connected the length of the state of Kansas.

Kizzie’s Kisses is Book 2, the first full-size book in the Grandma’s Wedding Quilts series. You may read the full book decription as well as purchase Kizzie’s Kisses by CLICKING HERE.
Posted by Zina Abbott Author at 9:23 AM