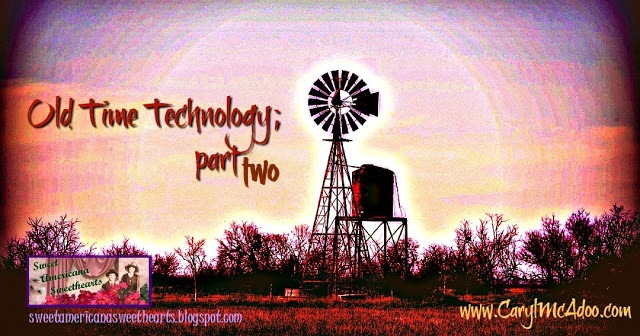 In Part One of Old Time Technology, we discussed how our ancestors cured meat in a smoke house. Makes my mouth water just thinking about it! But in those bygone days, what rated much more paramount than a tasty ham or smoked turkey was having clean drinking water. 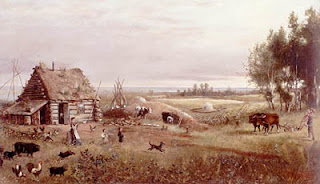 Settlements first rose around rivers, springs, and ever flowing creeks, leaving the second wave of pioneers to either dig themselves a well or purchase potable water. Hauling enough from whatever the closest source might be could take one person a good portion of their day. The time and effort to dig a well and secure its walls with brick or boards—two of the more common methods then—took much longer, but ended the daily treks.


Though a well could be dug alone, it was no easy task. To dig even a twenty-foot well by hand, the property owner would enlist help from his new neighbors. Those helpers might also shed some light on how deep they would probably have to go. If they dug thirty feet without striking water, they’d usually give up on the hole and try elsewhere.

After only a few feet, the walls had to be braced to prevent a cave in. Once the shaft opening got down to the layer of water, the diggers had to keep on going, usually with someone up top manning a pump.

Only a few inches of water wouldn’t meet the family’s need.

Throughout history, man has sought ways to make his life easier. Eventually, they’d build a house right over a well and install a hand pump right in the kitchen. Having running water might win a man his special sweetheart, especially if hauling water had been one of her childhood chores.

My husband’s great-grandparents on his mother’s side still lived in the south Texas house his grandmother was born in when I first met the family. A windmill right outside the kitchen window filled a water tank about half-way up that fed the house. Pressurized sweet water no less! Even had an overflow that ran out to the stock tank for the cattle.

Talk about spiffy keen! It’d been in service from the eighteen hundreds. Shame back then, Ron wasn’t interested in the history of such things, but he still talks about that water! No chlorine or fluorides, just pure, clean water straight out of the earth!

By HEARTS STOLEN, book two in my Texas Romance family saga set in 1844, Henry Buckmeyer had water in the house and a wonderful bath house with a system to even warm the water. What was an extreme luxury in those days, we take for granted today, turning a faucet and soaking in a hot tub full of refreshing, rejuvenating, cleansing water!

Speaking of the Texas family saga, book eight just debuted this week! COVERING LOVE starts off in Texas, but takes its readers to the Alaskan frozen tundra, New York City's high society, the tropical paradise of Hawaii and back to the Lone Star State. Quite the deal with four romances in the one story :)

Bio: Caryl McAdoo loves writing stories for all ages that glorify God and is thrilled Christian fiction fits her life purpose so well. Bold not bashful, she’s quick to share the Bible principles she lives by through her characters and hopes each title ministers His love, mercy, and grace. Known as the “Singing Pray-er”—with a YouTube channel to prove it—the prolific hybrid author also loves praising Him with new songs He gives her. Her high-school-sweetheart-husband moved the family from the DFW area—home for fifty-plus years—to the woods and seat of Red River County. After Ron, Caryl counts four children and sixteen grandsugars life’s biggest blessings. The McAdoos live a few miles south of Clarksville in the far northeast corner of the Lone Star State with two grandsons.