Late Bloomers - Now and Then


There are some names that come to mind for a woman who never married or possibly married later than was typical of the time. Old maid, spinster. Neither is becoming or thought of as a compliment.

Some twenty years ago, I was considered to be a late bloomer - or at least that's how my mother termed my unmarried state. I was in my mid-thirties without a serious relationship in sight. After missing the boat in my prime marrying years of the previous decade, my family assumed I was focusing on my career. Yep. That's what I was doing. 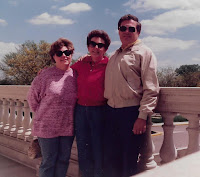 Being single, I was blessed to be able to take vacations with my other old maid, oops--I mean single, friends. Those trips were epic. And I also traveled with my parents a bit. Here we are in Jefferson City, Missouri in about 1995. The tour of the state capital was reminiscent of the vacations I had with these people as a child. Ah, the joys of growing up as the daughter of a history buff.

We traveled from the east to the west more times than I can count. Even though I was in need of a husband, I never made a journey to meet a man to become his wife. Neither did any of my friends. We simply waited around at home hoping to meet The One. Mr. Right.

In the world we know today, the idea of risking everything and leaving our friends and family behind to marry some man we’ve never met seems insane. Back in the 1800’s when the western territories were being settled, that’s exactly what thousands of women did. Many of these women became mail-order brides to avoid the label of "Spinster." I'm betting that while necessity played a part in the decision, the hope for love was there. I wouldn't be able to be a romance writer if it weren't for that undying hope!

Things were very different in the 1800’s. A woman needed a man to take care of her. Okay, I suppose some women today still need that, but that's probably a topic for another day. Seriously, women had limited opportunities to gain skills and jobs were taken by men first. A woman would get the job after all the able men had turned it down.

Obviously, there are exceptions to this rule. One such exception was Florence Bascom. She was the first woman to ever earn a Ph. D. from Johns-Hopkins University. After that she was the first woman to be elected to the Geological Society of America. She was a researcher, teacher, and an authority. Florence never married. I don't imagine she felt the need to have a man to help her make it in the world. Women of her ilk in the 1800's and early 1900's were rare.

Yes, the truth is it was hard for a single woman to make it on her own. If she didn't come up with a husband, she'd often be a burden on her family. When money was tight or times got difficult, an unmarried woman would sometimes be passed around to extended family members to lighten the load for her parents. That must have been humiliating and sad for her.

Most of the time, men had complete say in all aspects of his wife's life. So even if a woman was able to find a husband, it wasn't always a good situation for her. Running away to the unknown risks of the western territories was often a better plan.

At some point or another, I'm sure we've all commented on how hard it is to find a great guy. Today we have so many options to find a date. Single girls in the 1800’s didn’t have any of that. Just going to the next town over to find someone they wanted to spend time with would have been a major undertaking.

And, the entire time the girl was looking for someone she was interested in courting, she would have heard the clock ticking. Staying single for a prolonged period of time while she tried to find the perfect beau was not encouraged.

Compared to spinster, being called a mail order bride could have been appealing. I have to think that the idea of knowing there was a man who couldn’t wait to meet and marry her would have done wonders to boost the girl’s confidence.

If the girl chose well, her new western husband would already be settled into life with a house and enough money to live on. Best of all, she wouldn’t have to go through the whole courtship nonsense. She and her intended would be able to get married right away without the scrutiny of society or meddling parents. With time, patience, and some luck, eventually the women would belong to the people who welcomed them and the land they called their own.

It's difficult to tell if the mail order brides truly understood how difficult their life would be once they reached the west. They would have found challenges they never would have experienced if they’d stayed home.


What we do know is that the sheer amount of courage these women would have needed in order to complete the journey made them a good match for their pioneering husbands. Without these brave women, it would have taken a great deal longer to tame the Wild, Wild West. 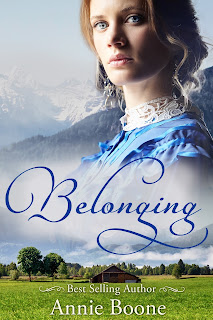 In my sweet romance stories, I'm more than aware that the whole life of a woman in the 1800's is softened and romanticized. I do it on purpose. While the reader can feel the hardships these women faced, it's still portrayed easier than it was. I do that so there's not so much angst that a happy ending seems unrealistic. And since every sweet romance must have a happy ending, I create one no matter what! Knowing that all stories didn't have a happy ending doesn't mean that wanting one in what we read is wrong!

In my story, Belonging, Bianca was an orphan. Life as a spinster orphan would have been unbearable. Her final fate was undecided until she made a decision that would shape her life for the better. She was likely going to have to work in the orphanage she grew up in or be turned out on the streets. So, she went west to find her true love. Of course we know she found her happily ever after, but if you want to know about her journey, you can find the book on Amazon.


And finally, I want to share my wedding picture with you. Yes, I was an old maid. A spinster. A late bloomer. I was 41 years old in my wedding picture! But I finally found my true love and I didn't have to go west to do it! And, yes, I did wear black. It wasn't for any other reason than I look best in black! My mom was disappointed in the choice, but she's over it now.