A SHORT HISTORY OF CANDLE MAKING

A place I’ve only visited a few times. But a country filled with a glorious and interesting history. Built on the backs of a melting pot of countries, cultures and people. A true free world. Where only the strong survived, through wit, grit and determination.

During this research, I discovered my new hobby and passion outside of my love for writing historical romantic westerns.

I got caught up in what they lacked in a world with very little technology as we see it all around us today. This got me wondering about lighting and how well it was addressed in the old days—leading to my fascination about candles, the rulers of the night for thousands of years.

A SHORT HISTORY OF CANDLE MAKING

The most curious of things was how candle making was developed independently all over the world using different methods, all leading to the same outcome. That outcome, of course, is a continues stream of light sustaining a flame over a longer period of time.

In 221 BC China during the Qin Dynasty they used Whale blubber. 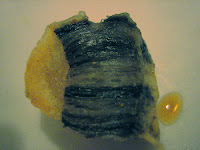 Early China and Japan, also used tapers, which were made with wax from insects and seeds, wrapped in paper and burned.

The Romans in (500 BC) used tallow, which is rendered from beef or mutton fat.

It’s said that the Egyptians were the earliest known inventers as they used rushlights (touches), which were made by dipping a pithy core of reeds in melted animal fat. Although these weren’t true candles, as they were wrapped around sticks. Later, the Egyptians created true candles using beeswax, and crafted the first candle holders from clay.

Candles made of beeswax in Germany 6th/7th c. AD 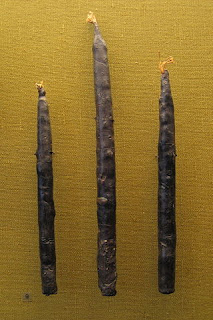 Candles made from beeswax today.

By photo by User:Ejdzej, figures by Teresa and Czesław Niedźwiedzki - Own work, CC BY-SA 3.0, https://commons.wikimedia.org/w/index.php?curid=1302875

I really could go on about this topic forever but I will leave something for my next visit with you all. I’m Sandra Sinclair signing off, and I hope you found what I had to share for now interesting.

Where to find me.