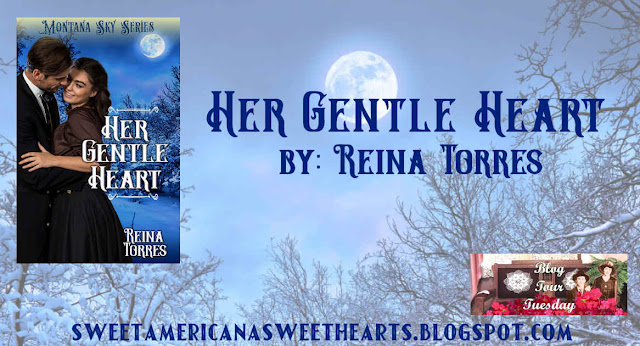 A snowed in train brought her into his life. His stubborn ways put walls between them. When the snows let up, will they go their separate ways or will he warm to Her Gentle Heart?Hampton Wells has been working hard at one train station after another, biding his time until there’s a job for him to be the one in charge. Trouble is, he’s been hiding an important secret from his friends and his boss. And now, temporarily situated at Sweetwater Springs during a snow storm, his secret is about to be revealed and threaten his job. Or, he could let down his walls and ask for help. But that’s not really the kind of man that he’s been. Rosina Valero was a young woman in search of her place in life. She lost her teaching position when the school closed for the winter and boards the train to travel to other towns looking for work. Heavy snowfall holds her up in Sweetwater Springs, but snow's not the only thing that needs to melt when she unwittingly discovers Hampton’s secret. Will he accept her help, before it's too late?When two people who are falling in love are destined to go in two different directions, can anything bring them back together?

Spend time with Hampton and Rosina, by CLICKING HERE.

Love - Romance - BooksAren't they all the same thing?Oh, I sure hope so! I've been reading romance books for what seems like forever. When I was a teen, the days that I wasn't in dance class after school I'd go to the mall to wait for my mom to finish work for the day and my haunt of choice... Waldenbooks. (I think I just showed my age there.)Whether it was Scottish Lairds, Medieval Knights, Regency Gents, Rough and Tumble Cowboys, or handsome modern Heroes, I loved them all! There was always another hero and heroine to follow through page after page of breathless love!I really hope that my readers will enjoy some of the same thrills as discover characters to love between the pages of my books.