A Short History of Blacksmithing

This metal working art is thought to have originated in the Iron Age in 1,500 B.C.E. in what is now Syria. Earliest methods would have consisted of placing iron into a campfire and using crude tools to work the molten ore into the desired shape. Three elements were needed in close proximity for metal work to be economical: iron, flux (a substance used to promote fusion of metals) and fuel.


Next came what were called bloomeries, which were hive-like structures with a vent on the top and an entry hole on the side to reach the small furnaces inside. Iron was placed in the furnace and heated until it melted. Cooled but still red iron (called blooms) was pulled from the furnace and pounded into rectangular bars of wrought iron. Although not a strong metal, this wrought iron could be formed into desirable shapes and used in everyday life. 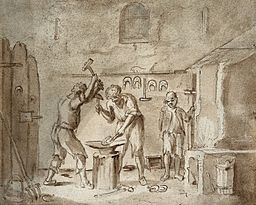 Three thousand years passed before the craftsmen understood enough about the magnetic properties of ore, the changes brought about by the use of charcoal or coke, and the variations in amount of oxygen used to improve the type of metal produced. In some times and regions, the blacksmith was held in high regard for his ability to make his own tools and manufacture items from globs of stone. He also made tools for others to use in their trades. At others, he was reviled as practicing the dark arts.


Socially, the blacksmith became the local handyman because he was often called upon to create or fix a wide variety of items made from metal. Wheels needed rims, horses needed shoes, wives needed cook pots, soldiers needed axes, swords and knives, farmers needed hoes and plows, fishermen needed hooks and gaffs, bakers needed pans, etc. Over time, some blacksmiths specialized in only one type of metal implement and thus earned titles such as blades smith or armour. In addition to the everyday work, blacksmiths were engineers who always looked for combinations of metals and methods to produce a harder metal. Each exploration group from Leif Ericsson to Christopher Columbus would have included a blacksmith to keep the metal items in repair as well as search for new sources of ore to mine. Two dates important to note that aided in the decline of blacksmithing are 1793, Eli Whitney’s patent on the cotton gin, and 1838, patent by John Deere on the plow made of steel. Advances in mass production of metal parts and the reliance on machines, rather than horses, are signs of the progress of the Industrial Revolution, and only out-of-the-way places still turned to the blacksmith for solutions. 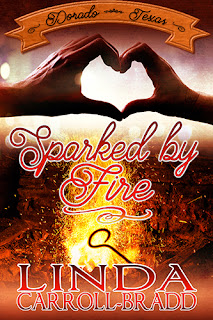 One of my recent releases, Sparked by Fire, features a blacksmith hero and a boarding house cook heroine.


Tagline: Can a wounded soul find solace in the attentions from a cook who nurtures through her culinary creations?


Amazon buy link
Posted by Linda Carroll-Bradd at 11:34 AM