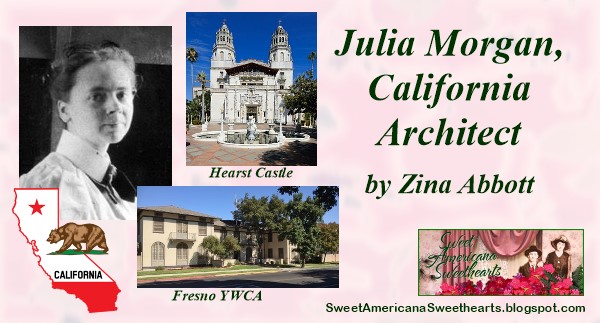 I’ve been sitting on this blog post for several years now. I was inspired to write it after, on a visit to a doctor or car dealership in Fresno―I cannot remember which―I happened to pick up a Fresno magazine about early California architect, Julia Morgan. This article mentioned some of her features outside of Fresno, but focused on her design of the Fresno YWCA and a few other Fresno buildings, most still in use today. What better time than to have this early California female professional follow my trio of posts on early California lady lawyers: Please click HERE, HERE, and HERE. 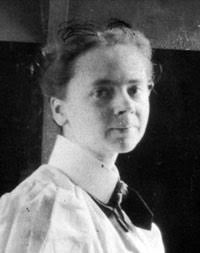 Julia Morgan (January 20, 1872 – February 2, 1957) was an important Oakland architect, one of the first major woman architects and first woman licensed as an architect in California, where she designed over 700 buildings. William Randolph Hearst was one of her major patrons and she was the chief architect of a number of Hearst projects including Hearst Castle, the Hearst Building in San Francisco, and others. Morgan also designed a number of buildings for girls and women including a series of YWCAs across the western United States. 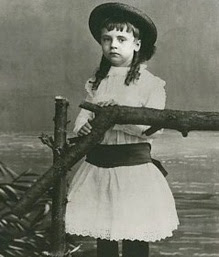 Julia Morgan as a child

Julia was born January 20, 1872 in San Francisco, to Charles Bill Morgan and Eliza Woodland (Parmelee) Morgan. Both came from well-to-do families. The Morgan family moved to Oakland when Julia was two years old, a few blocks away from Oakland High School. It was said to be a large, 3-story Victorian in the Stick-Eastlake style. Julia Morgan had three brothers, Parmelee, Avery, and Gardner Bulkey “Sam,” and one sister, Emma. She was particularly fond of her youngest brother, Sam.

Julia’s father was not a particularly successful businessman, so the family relied on money from Eliza's family. Eliza ran the household with a firm hand. When Eliza's father died in July, 1880, Eliza's mother moved into the Oakland home, bringing the family wealth with her. All these things provided "young Julia with a role model of womanly competence and independence." She turned down her parents' offer of a debutante party, saying she wanted to gain a career first. 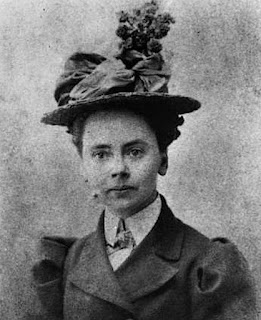 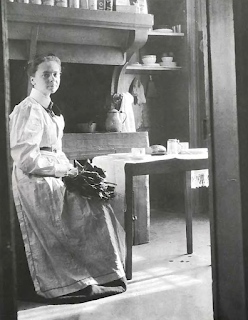 After graduating from Oakland High School,  Julia Morgan attended the University of California at Berkeley where she was mentored by Bernard Maybeck. She graduated from with a degree in civil engineering, then went on to study at the Hopkins School of Art Instruction. With encouragement from Mr. Maybeck, she applied to the prestigious École nationale supérieure des Beaux-Arts in Paris, the national fine arts school of France. After initially being rejected because she was a woman (the school had never allowed women to study architecture), she was finally accepted. In 1902 became the first woman to receive a certificate in architecture from the school. In 1904 she was the first woman licensed as an architect in California.

After opening her own office in San Francisco, Julia Morgan designed the YWCA building, several churches, and a number of residences. One of the more unusual structures she designed was El Campanil at Mills College, which was paid for by “Borax" and Mary R. Smith. It was one of the earliest reinforced concrete structures west of the Mississippi. When this building came through the 1906 San Francisco earthquake unscathed, it did much to advance Morgan's reputation as an architect and an engineer. One of her first projects was to rebuild the Fairmont Hotel after the destruction caused by the 1906 earthquake. 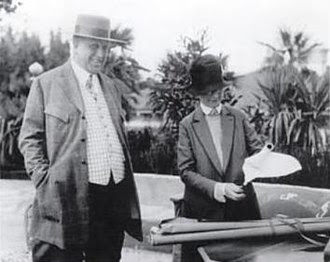 Julia Morgan stood only 5’ tall, and she never married, but focused on her work her entire life. She was an intensely private person. With determination and strength of character, she fought for acceptance in her field. Fearless, Morgan was known to climb scaffolding to examine the construction of her designs. These traits became essential while working with her most famous client, newspaper mogel, William Randolph Hearst. Considered by many to be Julia Morgan’s major career achievement, she designed ‘La Cuesta Encantada,’ a Beaux-Arts extravaganza in San Simeon, California, which was built between 1919 and 1937. Probably her most famous project, it is popularly known as Hearst Castle. 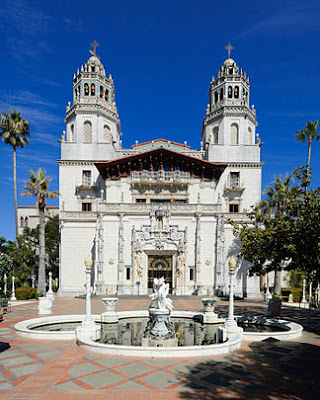 Morgan also designed the “Little Castle,” the Berkeley Women’s City Club - a beautiful mélange of Moorish, Gothic and Romanesque elements. Hearst’s mother, Phoebe Apperson Hearst, chose Morgan to design many buildings for the women’s organizations of which she was a major patron. 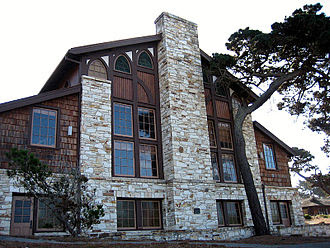 Asilomar, the YWCA camp Morgan designed in Pacific Grove, is a California State Monument and perhaps the most prominent Arts & Crafts compound in the country. 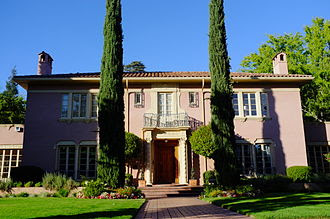 A Julia Morgan house
In her lifetime Morgan designed and saw built over 700 structures, including over 100 single-family homes in Berkeley alone. She was skilled in many styles, ranging from the brownshingles so characteristic of Berkeley, to formal classical structures and numerous revival buildings. Her homes in the styles of the Arts & Crafts movement rank with the best of her contemporaries. She 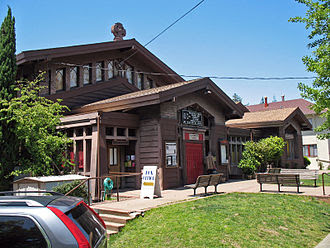 St. John's Presbyterian Church, Berkeley, CA
She also designed churches, hotels, civic and commercial buildings, and museums. For many years, she was the official architect of the YWCA in the west. She also built residences in Honolulu, Pasadena, Long Beach, and Oakland, as well as Fresno.

The YWCA residence hall located at 1660 M Street and San Joaquin Avenue in downtown Fresno, designed and constructed in 1922, is distinctive for its Julia Morgan architecture. At the end of this post I have quoted most of the article written about Julia Morgan and her role in building Fresno’s YWCA which inspired this post.

In 2014, the American Institute of Architects broke the gender barrier for its highest award, the gold medal, by awarding it post-humously to Julia Morgan nearly fifty-seven years after her death in 1957 and more than 100 years after the first gold medal was conferred. This organization was prompted to do so after several recommendations by those who recognized the role her architectural style played in inspiring and developing architecture nationwide. "Her work mirrored the social and economic burgeoning of California and the changing roles of women," Philadelphia architect Denise Scott Brown wrote in a letter of recommendation. "Now that we are taking off our blinders, we can see Morgan's greatness...."

Unfortunately, during her lifetime, her reputation eroded as the more austere modernist movement became dominant and the more lavish Beaux-Arts tradition characteristic of Morgan's work fell out of vogue. 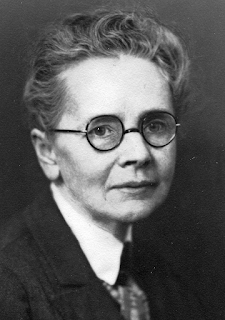 Morgan practiced nearly 50 years before her retirement in 1951. She died in 1957, and is buried in Mountain View Cemetery in a family plot marked by a modest gravestone. She said “My buildings will be my legacy…they will speak for me long after I'm gone.”.

For more images about Julia Morgan and her work, please CLICK HERE.

The YWCA residence hall located at 1660 M Street and San Joaquin Avenue in downtown Fresno, designed and constructed in 1922, is distinctive for its Julia Morgan architecture.

A Fresno Bee article dated October 16th, 1988, quotes historian Sara Homes Boutelle, who wrote the first “critical biography of the most significant and successful female architect in the history of their profession.”

Bocelli said, “Morgan delighted in the purposeful variation of scale. She used vaulted ceilings or left trusses open to extend the height of even small rooms, and favored open plans that created a feeling of expansiveness, while sometimes juxtaposing that openness with enclosed recessed to give a sense of shelter and privacy.”

Morgan is noted for visiting the families of her clients and sitting on the floor with the children to understand their personalities and needs.

She then would design the building from “...the inside out,” Bocelli said, with the interior of the building being of primary importance. The design of the YWCA residence hall certainly incorporates those ideals.

The building features Spanish revival-style with Italian Renaissance detailing. In the early days of the 20th century, buildings didn't have air conditioning and heating; consequently, the climate was a key factor in the design of the residence.

The two-story building is H shaped with a courtyard. The sleeping porches connect to the usable attic, and whereas they were once screen porches, they are now enclosed.

“Deliberately adapted to Fresno's climate, this harmoniously designed building had great care given to the function for which it was constructed.

“The exterior might best be described as an adaptation of the Italian villa-style coolant low pitched hip roof, smooth, stucco wall surfaces, and Broad Lodi Wald, unroofed front veranda. Windows are of two types, arched and rectangular, with the Arches reflecting the Romanesque style. Shallow balconies, with simple wrought iron railings and supports, under the second floor windows are characteristic of the style.

“The interior has a lounge for the residence, a small library, and a spacious recreation hall which has recently been redecorated so that it can be used by volunteer workers to provide lunches to large groups as an additional source of funds for the organization, unquote rights and author in quote Heritage Fresno.”

The YWCA building his representative of Morgan training and Neo-classic Beaux Arts Elegance, but, as Boutelle noted, also possessed a Craftsman emphasis on simplicity and utility.

Today the YWCA building continues to provide moderate cost housing for women just as it had since its Inception and is considered to be the last building designed by Morgan still in use for its original purpose. Although it reflects the ravages of time, the building maintains the Integrity of Morgan architectural design and joins with other examples of her architecture and preserving her Legacy.

“Alterations to the building have been minor, and do not detract from the significance of the building. In the early 1940s the third floor dormitories parentheses sleeping porches on parentheses we're partitioned into several smaller areas. Other than this minor change, the building retains its original integrity,” notes Valerie D. Comegys on the building’s nomination to the National register of historic places.

Morgan is also credited for designing a small bungalow activities building in west Fresno and the recreation center on Tuolumne and L streets.