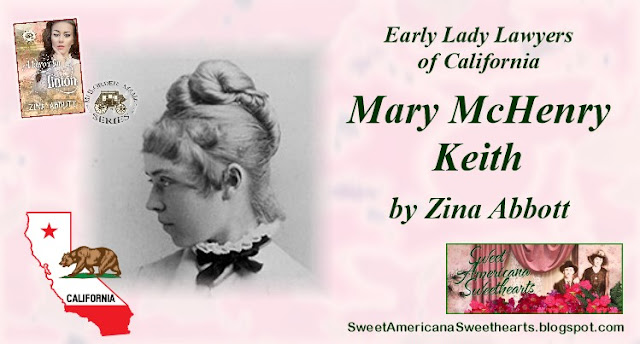 In earlier posts, I featured two of the first lady lawyers who were admitted to practice before the California Bar. The first was Clara Shortridge Foltz, and very soon afterward was Laura de Force Gordon. Both of these women, intent on expanding their knowledge of the law after already passing the bar, applied to the Hastings College of Law (Now the University of California). They were denied admission based on their gender. After filing a lawsuit, they won their case. Unfortunately, due to financial and other reasons, neither completed the course of study and graduated.

The first woman who attended and graduated from Hastings College of Law was Mary McHenry. Graduatating in 1882, Mary McHenry practiced law for only a few years, although she used her law degree throughout her life to advocate social justice issues, specifically woman suffrage, opposing white slavery and prostitution, and animal rights issues.

Mary's father was not supportive of women's work outside the home, but did not stop her from attending college. She completed her Bachelor of Arts degree in 1879 at the University of California in Berkeley. Thanks to the efforts of the above-mentioned lady lawyers to make it possible for women to attend law school about the time she finished her undergraduate degree, and without telling her father, she enrolled in Hastings.


For a short time after graduating from law school, Mary worked as a lawyer specializing in probates. She gave up being a lawyer in 1883 when she married prominent landscape artist, William Keith. Mr. Keith died in 1911, and Mary did not remarry.

Mary McHenry Keith focused activist work after her marriage. Her work in this area started when she was still a student and promoted the dress reform movement, which drew attention to the ways in which women’s clothing restricted the abilities of women to comfortably and effectively engage in the full range of activities available to male classmates. As a as president of the Association of Collegiate Alumnae, she addressed the importance of women receiving an education.

Mary firmly believed that women should develop themselves to their full potential, and that they should fully participate in society. In 1895, she organized the Woman's Congress (held in Berkeley) at which time she met Susan B. Anthony and began a regular correspondence about suffrage and women's rights. After the dismissal of the campaign in 1896, Mary revamped and retargeted the movement; publicly speaking to the right and need for co-education, centralizing suffrage as a primary cause in women organizations across the state, and integrating modern devices, such as cars and telephones as a way to reach and democratize rural areas. her leadership in Northern California provided a key role in securing the passage of suffrage for California women in 1911.

In 1912, Mary was elected president of California’s Equal Suffrage Association. In this role, she expanded her experience and suffrage support to other states, such work contributed to the 19th amendment's ratification in 1920.


Mary was an advocate for animal rights. She saw connections between women's and animals rights, and her thoughts on animal rights are reported to have had a strong influence on John Muir. Her advocacy for animal rights led to her service to the Humane Society, the California Audubon Society, as an officer for the Society for the Prevention of Cruelty to Animals (SPCA) and as a trustee of the Latham Foundation for the Promotion of Humane Education.

As a donor to the Metropolitan Museum of Art and William Keith’s widow, she also was recognized for her work cataloguing, preserving, and exhibiting his collected works.

Mary McHenry Keith lived until the age of ninety-one. She died in Berkeley, California, on October 13, 1947.

This includes my trio of blog posts about early California lady lawyers. I’ve been interested in women and the law in California for years. However, my research for my romance, A Lawyer for Linton inspired my learning more about these women who pioneered professional careers and held leadership positions advocating for a better, more equitable society.

You may find the book description and purchase link for A Lawyer for Linton by CLICKING HERE.

My latest book to be released tomorrow (preordered purchases will actually show up on most readers’ Kindles late tonight) is Lighthouse Escape. What a delight writing this romance turned out to be. I hope my readers will enjoy reading. You may find the book description and purchase link for this book by CLICKING HERE.