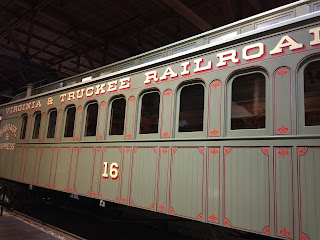 If you've never been to Old Sacramento and get a chance to go, take it. I love Old Sac. Every time I go to visit my son in Stockton (about 45 minutes south of Sacramento) I like to take a day and go to Old Sacramento.

Old Sacramento is just that. An entire district of historic buildings on the waterfront. The buildings are in use and made up of shops, restaurants and museums. One of my favorite museums is the California Train Museum.  Ty Smith, the museum's director, says "trains and railroading are at the heart of who we are as a people. We speak in railroad language and metaphor. To speak of trains is to speak of freedom and movement." He also says that the California Train Museum is made up of not just trains, but lots and lots of stories. 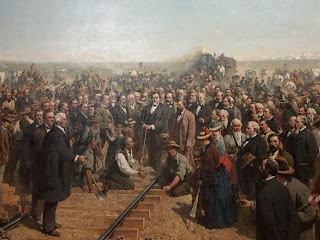 Every time I visit the museum I learn something new. For instance, towns were often built up around train tracks rather than tracks being built through a town. A town's location was determined by those tracks and where they went. Of course, there were also areas settled long before trains made it there. But once they did, the town often grew. Those tracks were often laid at the edge of a town or just outside it. Over time, as the town grew, it of course grew around the tracks.

Trains affect so much of our history. Did you know there are a ton of train songs in the American Song Book? Trains have a certain rhythm, one that didn't go unnoticed by musicians. There are tragedy related train songs, working on the railroad songs, love songs and love lost songs. Trains are percussive. If you listen closely, old songs from back in the day were a syncopation of wheels on tracks and train whistles. 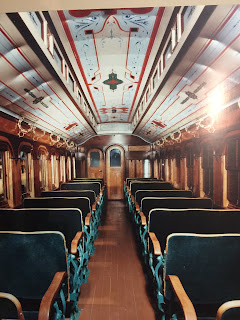 The museum is a connection to the past where train travel was as much about the journey on the rails as it was the destination. Train travel has been making a comeback over the years, and more and more folks are riding the train to ge where they're going. It's also a great way to see the country and meet new people.

The museum's steam-powered excursion train on the Sacramento Southern Railroad is a favorite because it brings the museum's history alive. Folks love riding trains!

So if you like trains, then the next time you happen to go through Sacramento, stop off at Old Sacramento State Park and visit the California Railroad Museum. You'll be happy you did.