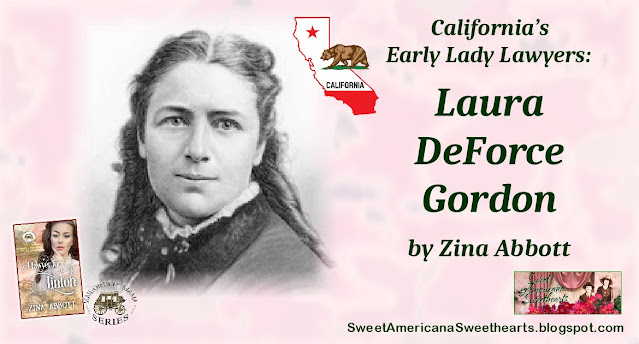 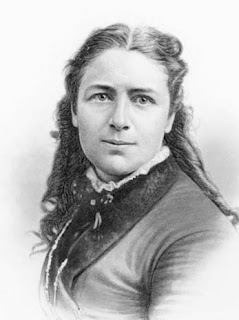 Laura de Force Gordon (August 17, 1838 – April 5, 1907) was a California lawyer, newspaper publisher, and a prominent suffragette. She was the first woman to run a daily newspaper in the United States (the Stockton Daily Leader, 1874), and the second female lawyer admitted to practice in California.

As an activist, Gordon, along with California’s first woman attorney, Clara Foltz, was a key proponent of the Woman’s Lawyer’s Bill, which allowed women to practice law in California. She also pushed for the inclusion of Article XX, Section 18, in the California Constitution that prohibited the state from barring women from practicing any "lawful business, avocation, or profession".

Laura de Force was born in Erie County, Pennsylvania to Abram de Force and Catherine Doolittle Allen. The family had nine children. Her father struggled with rheumatism, but the children (including at least two daughters) received education in the public schools.

After the death of one of the children, the family turned to Spiritualism in 1855. Starting at age fifteen, Laura toured the Northeast of the United States giving public speeches, including a speech in Boston at age eighteen. During one such event, she met a Scottish physician named Charles H. Gordon, and in 1862, they married. They gradually moved west. During the Civil War, they lived in New Orleans where he was posted. From there, they went to Nevada, and then, in 1870, to California.

In 1870, Laura she helped found the California Women’s Suffrage Society and gave more than 100 speeches on suffrage. She also worked for suffrage in Nevada, speaking throughout the state in the late 1860s and in front of the state legislature in 1871. One paper writing about her speaking at this time described her speaking as "like a stream of liquid fire". 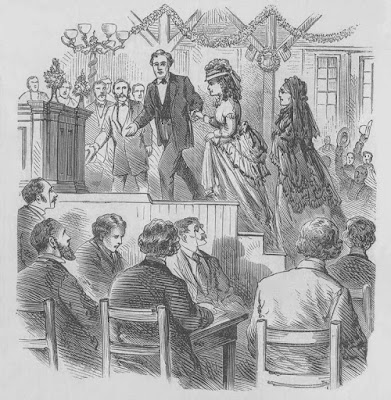 Gordon and Anthony escorted by Theo. Tilton to seats on Exposition Hall stage

Laura also traveled outside of the Southwest. She representing California at the 1872 National Woman Suffrage Association in New York City. At the 1872 Liberal Republican convention, alongside Susan B. Anthony, she asked the party to seat her as a representative from California. Although her request was responded to with laughter, she submitted a pro-suffrage resolution. 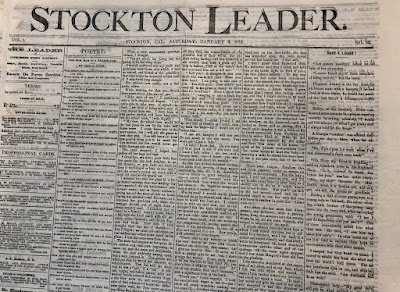 In 1873, Gordon became an editor and reporter for the Stockton Narrow Gauge. In 1874, she bought the Stockton Weekly Leader and converted into a daily newspaper. This made her the first female publisher of a paper in the United States, even though, by doing so, she recognized the difficulties for a woman running a newspaper, having “already experienced the pressure of the tide which a woman must work against, if she dare deviate from the old routine of dish-washing and cradle-rocking.”

Though the paper was successful, Gordon sold it in 1876 and began considering a more financially stable career in law. She did publish the Oakland Daily Democrat between 1876 and 1878 and she was a correspondent for the Sacramento Bee and other papers, with a press desk on the floor of the state Assembly. She also served as an organizer of the Pacific Coast Press Association.

Sometime before 1878, Laura divorced her husband on grounds of adultery. She later referred to herself frequently as a widow, rather than a divorcée, since widowhood was more socially acceptable. After beginning her legal career in 1879, she continued her suffrage activism. She was elected president of the California State Suffrage Association from 1884–1894, and a paid speaker on behalf of the movement in the 1888 presidential election. In 1892, she spoke at the Columbian Exposition in Chicago.

In January 1879, Laura Gordon and Clara Foltz were briefly admitted to the recently opened Hastings College of Law and paid the $10 tuition. However, on the third day of classes, they were asked to leave, in part because the school's Dean felt their "rustling skirts" bothered the male students. In February, the women filed and argued a case that persuaded the state's Supreme Court to overturn that decision. However, because of work, activism, and family obligations, neither Gordon nor Foltz were able to graduate. The first female graduate of Hastings was Mary McHenry Keith.

At that time, law school graduation was not necessary for bar admission, so Gordon studied on her own. On December 6, 1879, she was admitted to the State Bar of California, becoming the second female attorney in the state (after Clara Foltz). In 1880 she established her own firm in San Francisco, where she specialized in general and criminal law. Her work included successful defenses in several murder cases. She was also the first woman in California to argue a case to a jury. This work attracted national attention, particularly in the case of George Wheeler, where Gordon assisted the defense and Foltz the prosecution, leading the New York’s National Police Gazette to write that it was a case where "two females will be allowed to wag their tongues to their heart's content".

On February 3, 1883, Laura became the second woman to be admitted to the bar of the United States Supreme Court, after Belva Lockwood.

After beginning her legal career, Laura continued her suffrage activism. She was elected president of the California State Suffrage Association from 1884–1894. She was a paid speaker on behalf of the movement in the 1888 presidential election.

In 1892, she spoke at the Columbian Exposition in Chicago where she declared, “Woman is no longer content to remain a subject,” she said in the 1893 speech at a convention of women in Chicago.

Laura de Force Gordon retired from the legal profession in 1901. She spent her last years on her farm in Lodi, California. Her health deteriorated in 1906 after the premature death of her grandchild. She caught pneumonia in March 1907, and died in Lodi on April 5, 1907.

Gordon died about four years before women were granted the right to vote in California, and more than a decade before the 19th Amendment established that right for women across the United States. But she was always optimistic: “Woman suffrage is bound to come,” she wrote in 1896.

“There has never been a time when so many men and women took so deep an interest in the subject,” she wrote, “and I am happy in the thought that our day of political freedom is so near.”

I was prompted to write this series of posts about early California women attorneys as a result of my research for my novel, A Lawyer for Linton. The book description and purchase link for this sweet romance is available by CLICKING HERE.