I’m grateful for several tools that allow me to research the settings for my favorite time period to write about--the last quarter of the 19th century. But the Images of America books have proven to be invaluable.

The current story I’m writing is set in Astoria, Oregon in 1876. From Wikipedia and the city’s website, I culled details about the city’s proximity to the Columbia River and the importance of the city being on the river to develop the fur trade that burgeoned in the region in the early 1800s. But if I hadn’t bought an Images of America book, I would never have learned about a unique feature of the city. I like making sure my stories contain as much realism as I can find.

Because of Astoria’s location at the confluence of two rivers and backed up to a range of hills, the town had limited space to expand. Houses and businesses sprawled along the river’s edge, and soon taking a boat to get from one side of the town to another was easier and faster than walking. Until pilings were driven into the marshy wetlands at the river’s edge. Streets were then built on top of those pilings, and in some areas, businesses were constructed on that wooden base. 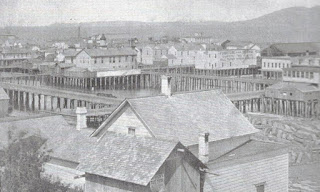 In the photo above taken in the early 1870s, you can see the construction of such boardwalks. This feature adds depth to the story because of the sounds of people and horses walking on boardwalks over water are different from boardwalks over lands. Smells would be intense, especially at the west end of town where canneries were located. I’m still working on ways to include this unusual construction in my story. 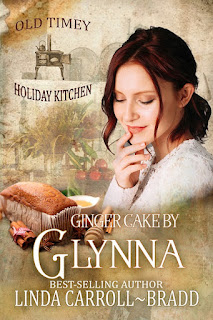 Baker Glynna Shaughnessy wants to bolster sales for her struggling bakery almost as much as she wants to revive her drab personal life. A baking competition in commemoration of the city’s incorporation offers a chance at making the shop’s name known…until she’s accused of cheating. According to the competition’s sponsor—a roguish man who sets her heart aflutter—Glynna can only remain a contestant if she invents a brand-new recipe…something she’s never done before.

Hotel manager Ritter Anton has six months to boost patronage at his grandfather’s Anton Grand Hotel. He accomplished success with the family’s Cheyenne hotel and he’ll succeed here then move to the next. The baking contest he invented sparks controversy with the entry of a baker who others claim has an unfair advantage. Ready to reject her, he can’t say no when the auburn-haired beauty pleads her case. How will he remain neutral as a judge when all he can think about is Glynna?

Amazon Author Page
or signup for her newsletter here
Posted by Linda Carroll-Bradd at 3:30 AM