In my current work-in-progress, my heroine is a new teacher who travels from the east coast to Washington Territory in 1866. Not being a teacher myself, I brainstormed what she would bring to help her in the teaching of a classroom of different grade levels of students. Of course, she’d assume the school would have slates, chalk, and reading primers for the enrolled students. But most teachers prepared with more than the basics. I thought back to my grade-school years and remembered one of my favorite aids in early grades was a set of flash cards. I loved using them to test myself on anything from spelling words to mathematics.

Then I wondered how long teachers had been using flash cards. A quick Internet search informed me flash cards have been around for more than two hundred years. Until the late 1700s, paper was too expensive to create and using paper for a teaching aid wouldn’t have been practical. But I discovered that a British woman wrote teaching aid books authored Mrs. Lovechild’s Three Hundred and Thirty-six Cuts for Children. This volume, published in 1803, included what were called reading cards to supplement the experience in the classroom and was one of the first to be used in the United States.

Flash cards grew in popularity and in variety of subjects because poor people who couldn’t afford to attend school, due to of the need to be employed, could self-educate at home. 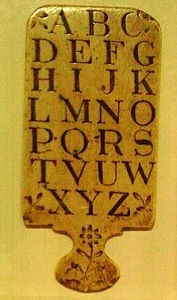 Years later, another expert emerged who reinforced the use of flash cards. Favell Lee Bevan was the third eldest of the co-founder of Barclays Bank, David Bevan, and was responsible for teaching the children on her father’s estates. She developed her own method of teaching that was contrary to the established hornbook method. Her middle grade children’s book about education titled Reading Disentangled (published 1834) included flashcards with a picture and the word plus the initial letter or sound (early phonetics). Miss Bevan became Mrs. Thomas Mortimer in 1841 and all her publications bear her married name. Her Peep of Day series of children’s religious books were wildly popular (500,000 copies sold and translated into 37 languages), and she was considered a literary sensation. 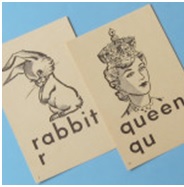 So, when you’re facing your young child or grandchild over a stack of vocabulary flash cards, think of the woman named Favell who embraced this teaching method.

My published title with a teacher heroine is titled Ione's Dilemma which is part of the Grandma's Wedding Quilt series.
Calling off her wedding made Ione Forrester the subject of Des Moines gossip so she accepted a teaching job in rural Texas. Carpenter Morgan Shipley is deluged with responses to a mail-order bride ad but the new schoolmarm catches his eye. Too bad she wants nothing to do with his courting.
Amazon buy link

Posted by Linda Carroll-Bradd at 3:30 AM