The Role of a Parson on the Battlefield

As you might imagine, the Civil War saw many men in need of spiritual guidance and care. A battlefield is a horror most of us will never understand and battlefields of long ago were bloody as the fighters often looked each other in the eye. Many harrowing tales have been shared over the years of Civil War battles that weren't civil at all.

Men were haunted by what they saw and what they had to do on the battlefield. The wounded needed more than medical care - they needed the spiritual guidance only a chaplain could provide.

But further than the obvious responsibility of ministering to those who were gravely injured or trying to recover, soldiers needed the strength and faith of a man of God as they lived through uncertainty and fear on a daily basis. This quote is from the National Archives and it clearly captures the truth of the important role played by the clergy.

"Clergymen of all faiths and denominations served with distinction in both Union and Confederate armies, overseeing the moral and spiritual well-being of the troops. Such care proved essential to soldiers who faced the constant uncertainty of violence and death on the battlefield and reinforced the religious underpinnings of a society in which faith played a much more immediate role in daily life."


Clergymen were sent along with regiments on their campaigns and many actually played a leadership role in battle doing double duty as needed. Most often, they were stationed in hospitals or headquarter locations and dispatched as needed. 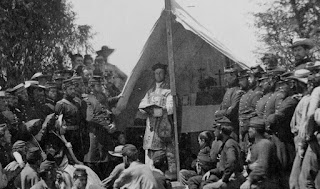 Men of God who chose to serve in the war left families behind just as the soldiers who enlisted or the officers who were assigned to the companies they belonged to. They left wives, children, mothers, and fathers. They left their flocks behind to serve men who would need them desperately. Doing the Lord's work wasn't always safe and these men were brave to follow their calling to such a dangerous place as a battlefield.

Dedication to serve those who need you is inspiring when it's so visible in others. Trusting God's wisdom and will in the face of death and destruction is another thing most of us don't have to choose to do.

In my series, The Parson's Daughters, Albert Barnesdale is called from the lap of luxury to be a parson. His faith sustains him through difficulties and happiness alike. When he's killed in the Civil War ministering to those who need him as he's called to do, his family is devastated. They're able to move forward because of how he prepared his daughters to live and walk in faith. 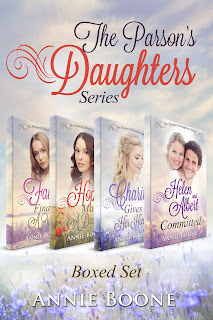 Find the complete series boxed set on Amazon that includes the story of Faith, Hope, and Charity his three daughters along with the story of how it all began when he met his one true love, Helen.

Follow Annie on Amazon, Bookbub and get email updates.
Posted by Annie Boone at 1:30 AM