National Day of the Cowboy! 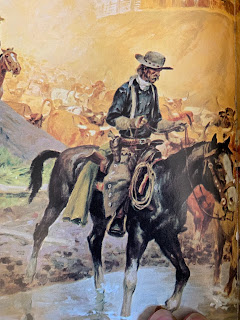 Hi, Kit Morgan here, and today I want to tell you about a day in July that a lot of you may not be aware of. National Day of the Cowboy!

In July America celebrates its independence on the Fourth of July. Well, the fourth Saturday of July is National Day of the Cowboy. I stumbled across this wonderful news and have been posting it here and there, and thought I'd share it with you!

The cowboy has an interesting history. In fact, they didn't come about until after the civil war. Sure, herds of cattle were rounded up and there were cattle drives before the civil war, but they were small in comparison to what came next. The aftermath of the war changed things and in this case, it changed the demand for beef.

As more and more settlers moved west and the country recovered, the demand for beef grew. A lot of which was in Texas! Ranchers let their cattle roam free and over time the animals became wild and unruly. They 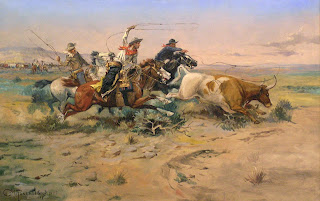 sent their men out to round them up and take them to market. This took time and the job wasn't for wimps. Up to five million head of cattle were driven to what the ranchers deemed the most profitable markets. During this time stories emerged of the men's adventures on the trail, the riches they made (some, anyway) and a few heroic deeds. Thus the "Cowboy" was born.

But the name "cowboy" is just one of many. The men who rounded up cattle or horses were also known as buckaroo, cowman, cowgirl, cowhand, cowpoke, cowpuncher among other names like waddy (or waddie if you're in the west) and wrangler. Other terms are caballero (mostly in the Southwest) gaucho, vaquero, cowherd, drover, herder among others. 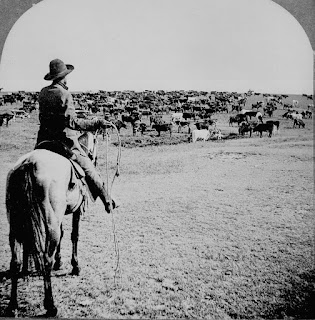 It took guts to be a cowboy. They spent weeks driving thousands of head of cattle across rangeland and prairies. There was any number of dangers on the trail. Cattle rustlers, predators, storms, and at times, just plain bad luck. No wonder they had so many stories to tell!

So come July 27th of this month, celebrate National Day of the Cowboy by thinking about how these brave men and women (yes, there were quite a few of those) helped shape this great nation in the aftermath of disaster and war. It wasn't easy, and cowboys and cowgirls today work just as hard.

Thank you to the cowboy!

Until next time,
Kit