As people from the east moved west for opportunity and new lives, they sometimes stopped in a place that made sense and built a new town. It was as simple as that. Um, not really. In truth, most towns didn't survive if there was no access to water, food, and jobs. 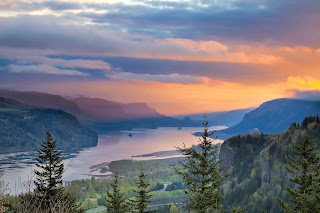 Access to water was an absolute necessity. Even a small creek could be enough, but more towns started on the river banks and valleys. Water to drink and cook with and water for livestock and crop irrigation are the obvious reasons to settle near a water source. Without water to grow food and take care of livestock, there would be no food for the settlers.


Water was also used in mining and manufacturing, thus making a living was possible. Stable businesses grew from prospectors who worked on their own. Mines, sawmills, grain mills, and other manufacturing ventures created new economies provided workers with regular paychecks. The workers provided the businesses with reliable means to start up and keep running to sell their products locally and further. Stock yards or larger ranches also became sources of jobs in the west. 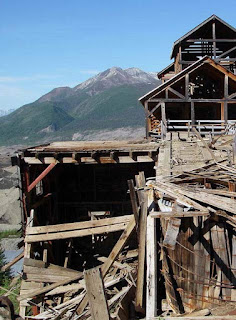 Once steam driven locomotives made it on the rails west, water loading stations became another source of jobs for those in the old west. The railroad in turn transported goods from start up towns across the west and back to the east. As manufacturing, farming, and transportation started taking root, the towns around these industries took shape and the west grew quickly.

As people came to work in the mines, mills, or transportation, the towns grew around the industries. Services were needed to support the people who moved in. General stores, doctors, butchers, blacksmiths, churches, schools, and on and on were needed to serve the people of the new towns.

And this is how the fictional town of Cutter's Creek, Montana came to be. The four authors dreamed up a place that would grow and thrive from the 1860s and beyond. The town started with fur traders and farmers on the banks of the river. A church was central to who they were and where they gathered.

My first book in the fun and inspiring Cutter's Creek series, New Beginnings, is now available for free. And it's also available on Barnes & Noble, Kobo, Apple, and Amazon. 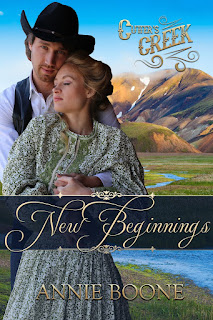 Widower Caleb Jefferson is the blacksmith in Cutter’s Creek with no desire to fall in love again. But after an incident at church, he finally sees his daughter needs a mother—and a mail order bride might be his best option.

Audrey Norris has just learned her late husband had many secrets—including a house note she can’t pay. With her daughter and mother depending on her for support, her options are few and mostly undesirable. After Audrey answers Caleb’s ad and they agree to marriage terms, it seems all her worries will be a thing of the past.

When Audrey arrives in Montana, Caleb tries to make it work, but can’t seem to move past his guilt over his wife’s death. Audrey prays every day for help and guidance. God is taking His time. Meanwhile, the new family grows closer while Caleb drifts further away.

Then one simple misunderstanding severs the fragile balance they’ve created. Will this be the end of Audrey and Caleb or the beginning of a lifetime of love?

Get this sweet and clean historical western romance for free on your favorite retailer here: