Today is release day for my second book in the multi-author “Lockets and Lace series by the authors of the Sweet Americana Sweethearts blog. Taking place from 1820-1920, these stories are linked by a visit to The Bavarian Watch and Jewelry Shop in St. Joseph, Missouri. 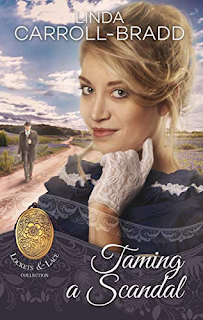 BLURB:
Socialite Mercia Saunders got evicted due to a touchy situation--which she feels was justified because it was for the sake of her art. Now her Philadelphia landlady has shipped her belongings to the family’s Newport, Rhode Island, home. Her father is livid and demands she choose between being courted by the hand-picked sons of prominent Newport business owners or live scandal-free with her oldest brother on a Texas cattle ranch. To a young woman raised with society, the ranch sounds like boring banishment, but she refuses to let her father choose her beau.
Pinkerton Agent Dominic Prentice is on the trail of a jewelry thief when he first meets the enticing Mercia—too bad he’s wearing the disguise of an elderly Southern gentleman. Then he’s assigned the task of keeping the art student under surveillance on a west-bound train to Texas. He can’t resist a railroad flirtation as himself, and the two draw closer than Mercia’s chaperones know. His allegiance to the Pinkerton National Detective Agency is tested when Dominic is forced to decide between tracking the jewelry or wooing the maiden.
Amazon BUY LINK 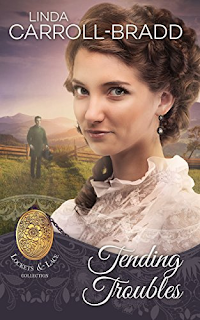 If you didn’t catch my first entry in this series, Tending Troubles, I put it on sale for only 99 cents through April 6th. Both novellas, clean and wholesome romances, are stand-alone stories and have connections with my “Dorado, Texas” series.
BLURB
Traveling west to become a mail-order bride is the most adventurous act Bostonian Imogene Franklin ever did. Unfortunately, the groom chose another so now Imogene must make her way on her own. Dreading the idea of returning home to continue raising her siblings, she is reduced to waiting tables in the Dorado café.
Guilt hangs heavy over Reggie Othmann—ever since he brought home a childhood illness that claimed both his parents’ lives. The ink is barely dry on Reggie’s degree when he arrives home in Dorado to establish a medical practice. All he’s wanted since he was ten years old is to help people, but the townspeople have been without a doctor for so long, they don’t flock through his doors as expected.
An illness sweeps the town, and Reggie is overwhelmed, fearing   he’s not qualified to heal them. Imogene steps in and together, they work hard to prevent anyone from dying, spending days together. Is their emotional tie born of the closeness of the ordeal or perhaps something more?
BUY LINK
Posted by Linda Carroll-Bradd at 8:21 AM