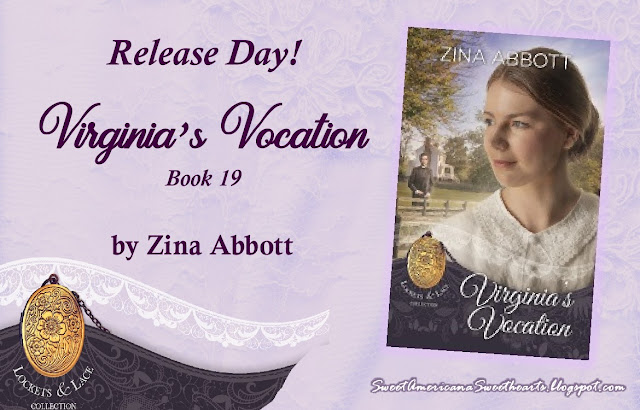 Will Virginia’s chosen vocation fill the empty spaces in her heart?


It is 1858. With both parents dead, Virginia Atwell lives with her older brother, Jefferson, and his family in Boonville, Missouri. Under a pseudonym, she secretly has been submitting articles to a well-respected investigative journal about controversial topics. To her dismay, she learns her family plans to buy new farmland in the wilds of central Kansas Territory, making it almost impossible for her to continue her clandestine article submissions. More importantly, Virginia is terrified of the prospect of living so close to hostile Indian tribes and dying by their hands because they resent white Americans moving onto their traditional buffalo hunting grounds.

Virginia’s brother, Jefferson, learns of her writings and decides it is time to get her out of Missouri. He yields to her persuasion and escorts her to Ohio so she may attend one of the few colleges in country that accept female students. There, she meets Avery Wilson, an aspiring writer, a teacher of two of her classes, and a fellow boarder at Drusilla Chilton’s boarding house. In spite of his impeccable politeness, Virginia cannot help but believe he disapproves of her.

Virginia’s publisher orders her to his office to discuss a special assignment. She must make a trip to St. Louis, but her landlady insists she cannot travel alone. Avery, curious about Virginia’s secretive meeting, and unable to resist his growing attraction to the irritating, but brilliant student, offers pose as her fiancé in order to escort her. While he is in St. Louis, he hopes to visit the Heartland Monthly offices to increase his chances the publisher will start accepting his submissions.

What happens when the publisher is not the only one shocked and dismayed to learn that the investigative journal’s star writer is a woman? Will Avery keep her secret? What about the assignment to visit the Kaw Reservation? Who will go to investigate and write the article? What will happen when the two return to Ohio?

Virginia listened to the measured footsteps coming down the stairs. Her curiosity grew as they approached the dining room. She caught her first sight of the man responsible for them as he slid past the jam of bodies crowding the doorway and crossed the room until he stood behind the chair opposite hers. He appeared to be several years older than the others but definitely younger than Jefferson. She guessed the gentlemen to be the teacher Drusilla had mentioned, the Mr. Wilson she said they were waiting on.
His brown suit with its matching waistcoat complemented his chiseled features and brown hair a few shades darker than hers. His complexion appeared to be paler than that of her family. Then again, it could be due either to living in a more northerly clime, or because his occupation did not require him to work long hours out of doors. A glance at the other young men led her to suspect the second possibility was more likely.

His gray eyes that studied her conveyed no warmth. With a sinking feeling, Virginia forced a slight upturn of her lips and nodded a greeting. Until they were formally introduced, it would be impolite for her to initiate a conversation. However, he did not need to speak for her to know he did not welcome her presence. 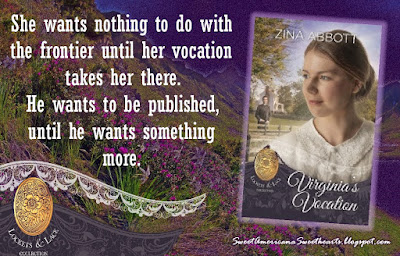 Posted by Zina Abbott Author at 12:57 AM