WRITING A SERIES & The Release of "CHASING A CHANCE"


One of the joys of writing a series with other authors is the chance to get to know them. This is true not only for the reader, but the author as well. This latest series, "Lockets and Lace" or  "Lockets & Lace" gave me a chance to connect with authors I'd only heard of, or in some cases, completely new authors.


We all had a chance to tell the stories that were in our hearts within the framework of a theme. For myself, the story "Chasing A Chance" had been nudging me for some time. The idea of an older couple, who had known each other as children, demanded to be told. When my friends and fellow actors agreed to do the cover shoot, it all fell into place.

The book design was agreed upon and the lovely lady, Evelyne, from Carpe Librum Book Design, turned the photo shoot into the beautiful cover you see here. I will tell you, Mike, the gentleman on the cover posted on facebook: "Always wanted to be like one of those models on the cover of a romance novel. Never thought I'd be one. In my old age, no less..." 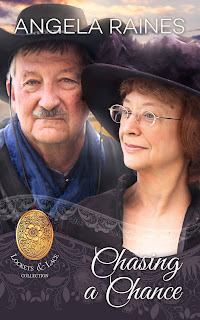 I will share with you a couple of photos that did not make the cover. As you can see, we had a lot of fun. I also need to give credit to my photographer, Nadine Keaney of NKDesign. She's done the photos for the covers of most of my books. 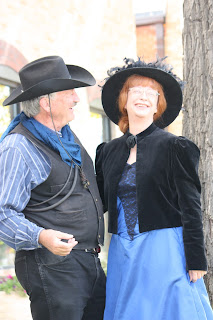 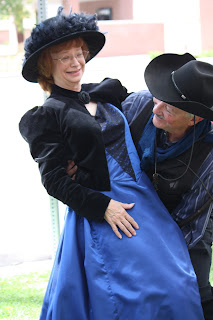 Make sure you head over to the FaceBook launch event, and check out no only my day, but the posts of the other authors in the series. We've each had a day that we've spent with you, letting you get to know us and our work. You can access it here: Book Launch

Now for a short excerpt from "Chasing A Chance":

The store was in shadow as the sun started over the horizon. Slowly, the light drove the darkness further back. Mary came from her living quarters, feeling rested for the first time in days. She moved to the front, intent on checking for any damage that might have occurred during the night.
A slight breeze blew puffs of dust down the street. Mary enjoyed the early mornings as the sun shone on a new day. Perhaps it was just wishful thinking, but mornings gave her hope. She was surprised to see Edwin coming up the street. A picture of him doing the same thing all those years ago overlay the present. She started to frown, followed quickly by a smile. Edwin had only been in town for two days, and here she was acting like the young girl she’d been before life got in the way.
The ringing of the bell above the door brought a grinning Edwin inside. At the sight of Mary his eyes glowed. "You're just like the picture I've kept in my head of you," he said, reaching to pull her close.


Mary relaxed into the safety Edwin’s arms offered. The years fell away, and she was the young girl who had believed in happy ever after, and the gift of friends. A weight lifted from her heart and mind, if only for a brief time.

Join the Lockets & Lace authors on Facebook for our
Launch Celebration event.
There you find information on how you may have a chance to win one of three great prices: a special book locket, a lace handkerchief, or a $40 Amazon gift card.

You can connect with me at the following places: