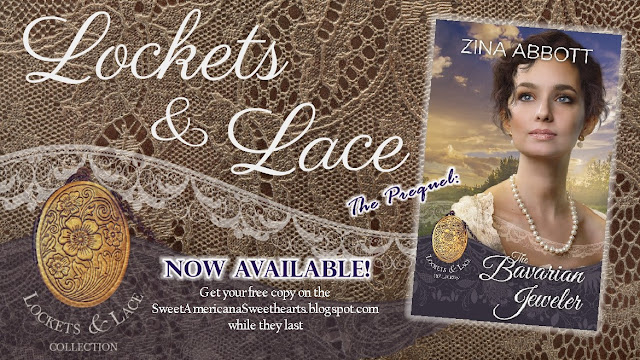 Today I am not just featuring the prequel,
The Bavarian Jeweler,
but the new
Lockets & Lace
series being brought to you by nine authors who blog monthly on
Sweet Americana Sweethearts.
CLICK HERE to keep up with excerpts and all the events for this series by following the Lockets & Lace page on Facebook.

This is only one book cover. There are nine yet to be revealed.
To get in on the fun and prizes,
CLICK HERE  to join us on Facebook for the 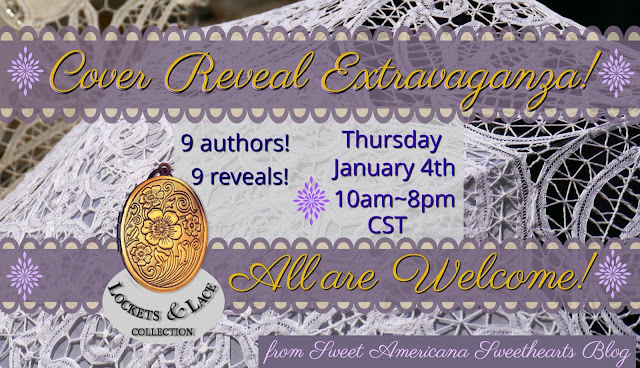 Now for a little more about The Bavarian Jeweler: 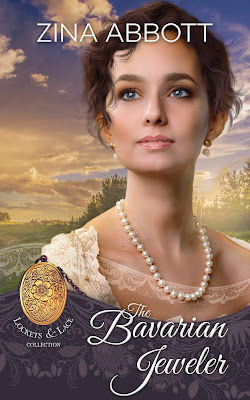 Sent to America in 1849 to avoid inscription into the Bavarian army preparing for war against Prussia, Wilhelm Mueller, a master jeweler and watchmaker, goes with his father’s promise that he will always have a little touch of Bavaria with him. His British cabin-mate on the ship who knows German helps him learn English. He meets some of his fellow passengers, including a group of Irish refugees escaping the potato famine. The lace made by a certain young woman captures Wilhelm’s attention as much as her pretty face and curly hair.
Upon landing in New Orleans, he finds everything is new in his adopted country, including his name. After sailing by steamboat up the Mississippi River, he stops at what was in 1850 the crossroads of America. It is there he holds to a touch of his homeland by opening his Bavarian Jewelry and Watch Repair shop. Over the decades, as he becomes known for a particular kind of jewelry, he realizes he has gained more by coming to America than what he left behind.


Wilhelm raised an eyebrow. He began to suspect it might be a long two months sharing a cabin with this man. “If you don’t care for the Americans, why do you go there?”
“In one word—trade. The American blighters are our biggest source of cotton for the mills I manage in Manchester. ’Tis why I’m sailing into New Orleans. ’Tis one of the biggest ports close to the southern states where they grow the fluff.” Edward paused, and eyed Wilhelm with curiosity. “What takes you to a land where you don’t speak the language?”
“Business. I speak French, the language of many in New Orleans.”
“Buying trip, eh? What business are you in?”
“Nein. No. No buying trip. I’m a watchmaker. I’ve come to set up a new branch of the family business.” Inwardly, Wilhelm winced at the truth he had stretched regarding his reason for relocating to America.
Wilhelm bit back the recurring surge of resentment that during the past two months occasionally resurfaced. His mind went back to that night in Pforzheim in Baden-Württemberg, the German state just west of his native Bavaria, when his father had unexpectedly shown up at his room and started the chain of events that twisted into turmoil Wilhelm’s carefully thought-out plans for his life.


The Bavarian Jeweler is available for sale on Amazon, but you may obtain a copy without charge as long as they last by clicking on the book cover image on the right sidebar of this blog and following the Book Funnel links.

Zina Abbott is the pen name used by Robyn Echols for her historical novels. A member of Women Writing the West, she currently lives with her husband in California near the “Gateway to Yosemite.” When she is not piecing together novel plots, she pieces together quilt blocks.