Was her husband a sinner or a saint? A spy or a traitor? 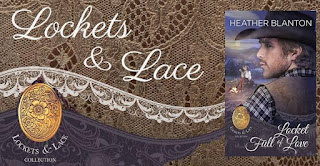 For years Juliet Watts has believed her husband died saving nothing more than a cheap trinket--but the locket he risked his life for turns out to hold a mysterious key. Together, Juliet and military intelligence officer Robert Hall go on a journey of riddles and revelations. But Juliet is convinced Robert is hiding something, too. Maybe it’s just his heart…

I have to tell y'all, I had such a good time writing Locket Full of Love! It's a romance, but the Lord led me to some wonderful twists and turns, making it the best mystery (I think) I have written so far. It's a roller coast ride that moves from St. Joe to Nashville to Denver. You'll stroll the streets of Defiance, ride horses in the San Juan Mountains, and haunt the halls of Washington politicians. I hope you'll order you copy today!

“How stupid do you think I am?”
The small-boned fist roared out of the dawn’s gloom and hit Robert’s jaw with the force of a shovel swung by a much larger man. Vision blurring, his brain fogging, he staggered back away from Juliet, holding his face. His hat tumbled to the ground behind him.
She stepped toward him, one hand clutching her suitcase, the other flexing over and over as if the punch had hurt her as well. Her pinched lips and burning eyes said she was ready to throw another, regardless of the passengers on the platform eying her with mouths agape.
“You try to rob me and then show up here to ride the train with me?”
Robert couldn’t fathom what was causing this outburst. “I don’t think you’re stupid at all,” he said, working his jaw back and forth. “And maybe if you tell me what’s got you so riled, I can explain. Who tried to rob you?”
“Like you don’t know.”
“I don’t know.”
She narrowed her eyes at him, slivers of cold fire shooting from them. “Someone was in my room last night rifling through my jewelry. Jewelry. Clearly, he was after the locket. I haven’t told anyone about it.” She raised her eyebrows in accusation at him.
“I didn’t tell anyone.” But he had. He’d sent a telegram. Making sure the revelation didn’t show on his face, he said, “Perhaps Mr. Mueller told someone. Innocently enough. He told the wrong person or the wrong person overheard?”


Her gaze narrowed down to slits of jade. Robert raised his hands in surrender. “If I had tried to rob you, Juliet, would I be here now?”
Posted by Heather Blanton at 5:00 AM