There is a lot of hullabaloo now-a-days about Amazon and online shopping. Amazon has been a force ever since it emerged as an online bookseller back in 1995. But before Amazon – 100 years before – there was Sears, Roebuck and Company, who came on the scene in much the same way. It's a story of ingenuity and seizing an opportunity--an American success story.

Richard Warren Sears was born in 1863 in Minnesota. In 1886, at the age of twenty-three, he worked as a Station agent for the railroad in North Redwood, Minnesota. When a shipment of watches was refused by a local jeweler, Richard Sears agreed to sell them on consignment for the shipper. The watches sold quickly and the experience proved so lucrative that Sears ordered more to be sold through other station agents. A few months later, he quit his job for the railroad and started his own mail-order business.

From such humble beginnings, this “master salesman” made smart decisions to grow his company—moving to Chicago for better transportation options, diversifying into other items, and taking on a watch repairman, Alvah Roebuck as a partner. For a very short time Roebuck owned the business entirely, but then Sears returned and convinced him to let him buy back half-interest in it. 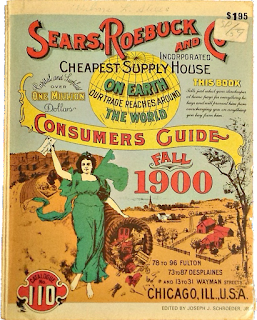 The first catalog for the A.C. Roebuck Company was published in 1891 and was 32 pages of watches, plus a few sewing machines and jewelry. The next year, the catalog was over 100 pages. Aaron Nussbaum and Julius Rosenwald, two Chicago businessmen bought out Roebuck’s half of the business in 1895 and the catalog grew to 532 pages and carried a huge assortment of items--rifles, movie cameras, telescopes, washer-machines, clothing, furniture, stoves, musical instruments, buggies, saddles and tack--even health tonics and tombstones and kits for houses! 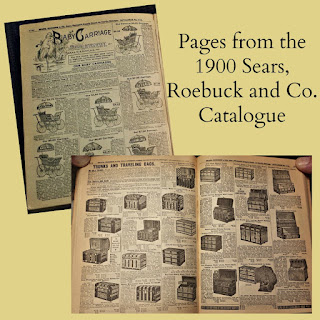 Then, when Henry Ford started selling his automobile to the masses, people didn’t mind driving to nearby towns to get what they wanted. Sears took notice and to counter this move in the 1920s, Sears opened retail stores. The company started making and selling its own brand items such as Craftsman tools and Kenmore appliances. In 1933, Sears put out its first Sears Wishbook filled with toys and gifts in anticipation of Christmas. (I remember the thrill of looking through this catalog when I was young!) Later on Sears moved into insurance (Allstate), credit cards and an early version of the internet for online shopping called Prodigy!

Richard Sears passed away in 1908 at the age of forty-five. (Lifespan at that time averaged 50 years.) I just wonder what he would have thought of the amazing growth of his business.

Like Ben Franklin 5 & dime stores and Woolworth's, it is with a certain sadness I watch the demise of a company that for so many years provided rural America with a choice of items so much larger than what could be obtained at the local variety store. In 1993, Sears stopped distributing its catalog. In  the 1990s, Wal-Mart surpassed it to became the nation’s largest retailer. More competition with Target, Kohl’s and J.C. Penney brought further sharing of the people's resources. In 2016, Amazon left Sears, Roebuck and Co. in the dust, making $136 billion in sales to Sears' $22 billion.

[Investopedia | Who Killed Sears? 50 Years on the Road to Ruin by David Floyd. Updated January 4, 2018.  https://www.investopedia.com/news/downfall-of-sears/]

Where do you prefer to shop?  In a store or online?
And what store do you remember from your childhood that is no longer here?