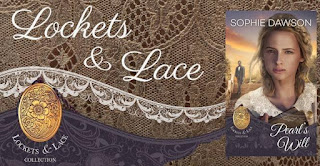 Will Miller doesn’t know what to think when the lovely young woman faints in his jewelry and watch repair shop--except he wants to help her any way he can.

Widow Pearl Ward, struggling to survive, needs to sell the watch-locket given to her on her eighteenth birthday. When she learns she’s expecting, he proposes.

Will Pearl’s feelings for her late husband stand between them? Can they build a life together with his mother dead set against them?

Here's an excerpt:
Will Miller opened the back of the locket and sighed. The engraving lessened the value. The piece was high quality. The cover over the watch was decorated with a five lobed clover design surrounded by scrolling. In the clover was a thin-pointed star with a small diamond in the center. The back cover repeated the design without the stone. Inside the back cover where a photograph could be placed was an engraving. ‘To Pearl Henry, From Papa and Mama, Sept. 9, 1906.”

Will glanced at the woman who was looking intently into the lace display. She was quite thin, honey blonde hair peeked out from under her wide-brimmed hat. She was wearing the simple clothing of a working woman. Navy skirt with a matching double-breasted long jacket, white blouse with a crocheted lace collar that spread beautifully over the blue. What he could see of her face showed a slim nose, unlike his fairly broad one. He’d have to see what color her eyes were. She lifted her hand and touched the glass of the case. A lace glove encased her slim fingers.

Will looked back at the watch-locket. It was suspended from a gold bow-shaped pin. It would look lovely on the bodice of her jacket. He wondered why she was wanting to sell it. The quality of her clothing wasn’t high-society, but it was well tailored and didn’t look worn.

Standing, Will moved back to the counter. She came over, waiting with a hopeful expression on her face. Her eyes were a deep green, nearly the color of pine needles. Framed with long lashes, they spoke of sadness, despair, loneliness, and desperation.

Even though Will knew what the true value of the watch-locket was, something told him to offer more. He wouldn’t tell his father he paid more for it. He’d pay for it up with his own money.

“Miss? Are you sure you want to sell this? It must have great sentimental value to you.”
She looked down a moment, then lifted her eyes again. They glittered with moisture. “Yes, but, if it’s possible, and I’ll understand if you can’t do it, would there be any chance I could purchase it back in the future?”

She must have fallen on extremely hard times. It firmed his intention to help her. It wasn’t because she was lovely, Will assured himself. Well, maybe it was a little. He hoped that wasn’t his main motivation. His Christian ethic called for being a Good Samaritan for others.

Will set the watch on the counter and named the amount he would pay her for the locket. She lifted a trembling hand to her lips. “I’ll hold it back from display so you can redeem it. At least, I can for several months. Would that work for you?”

“Thank you. You’re most generous. I’ll try to redeem it as soon as I can.”

Will picked up the locket and placed it on the workbench. Rather than pay her from the cash register, he opened his personal cash drawer and counted out the bills. He put the locket into the drawer, near the back.

As he turned around to go back to the counter, he saw the woman lay one hand on the counter. The other she raised to her forehead. Then, she collapsed to the floor. 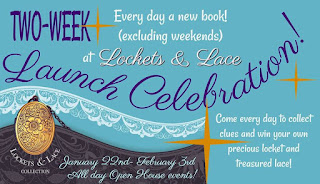 Join the Lockets & Lace authors on Facebook for our
Launch Celebration event.
There you find information on how you may have a chance to win one of three great prices: a special book locket, a lace handkerchief, or a $40 Amazon gift card. Please visit each day to learn more about each book as it is released.
a Rafflecopter giveaway

Posted by Sophie Dawson at 6:13 AM