The Hell Hole in early Arizona


Alcatraz of the Desert or Hell Hole of Arizona – both are appropriate names for the Yuma Territorial Prison (1885-1909). 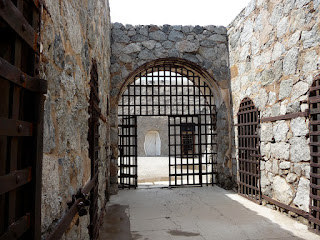 It was built at a cost of  $25,000.  In this arid desert land, the only materials available for construction were local rock and handmade adobe bricks.  Once it was up and running, the labor for the many additions to house more prisoners, came from the prisoners themselves. 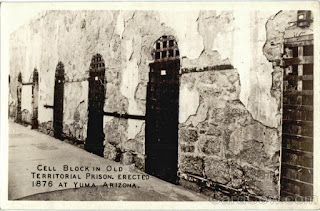 Prisoners were packed 6 to a cell.  Each 8 foot by 9 foot cell contained 2 tiers of bunks, 3 bunks to each tier, no wider than 18 inches.  The steel bunks had a skimpy straw tick mattress and one blanket.  There was not a wash basin or toilet facilities.  Only a bucket, which was emptied once daily (most of the time).   Think about it – 120 degree heat, 6 men, one bucket.  Multiply that by many cells of six men each. 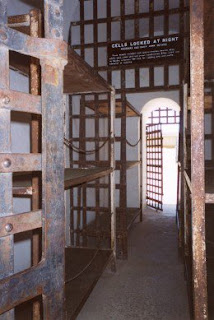 Inside the prison was the dreaded, “Snake Den”.  So named for the rattlesnakes that seemed to find their way in.  The den was hollowed out of solid rock.  It was 10 x 10 with only a tiny hole at the top for  a minimum of ventilation.  This was solitary confinement.  The room was totally bare except for a chain that the prisoner was chained to.  No blanket, no mattress not even a bucket.  The men used one corner of the room.  Water and one small loaf of bread was delivered daily. 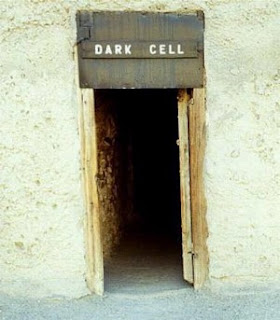 As you can imagine, prison breaks were attempted frequently. During one of these attempts, 3 guards were overpowered and killed including the one manning the Gatling, which was in a tower that overlooked the prison.  Escape looked certain, until gunfire came from the Gatling.  In disbelief the prisoners looked up to see the pretty wife of the prison superintendent, Mrs. Ingalls, manning the gun.  The prisoners had great respect for this woman as she had started a library, improved living conditions, and even brought them treats from her kitchen.  She had also taught those who wanted to learn, how to read.

Nobody moved.  You don’t shoot a woman!  One less chivalrous prisoner screamed, “Shoot her you fools! What are you waiting for?”  Gunfire erupted but Dora Ingalls continued constant fire and within the hour things were under control.

In the years of operation the prison held a total of 3,069 people, including 29 women.  It averaged less than 1 successful escape every year (26).  111 died while at the prison, mostly from Tuberculosis.

Thanks for stopping by to take a look  at The Hell Hole of Arizona.  Some of the authors from Sweet Americana Sweethearts are involved in two different sweet romance series.  Grandma's Wedding Quilts and Sweethearts of Jubilee Springs.  Below are the links where you can get a better look!