Controversy in 1878 over Cheese-Making Process

When I conduct research for a story, I’m constantly amazed that events or “things” that I think of as being of happening in more recent times really aren’t. Wit Vanderveer, the hero of my latest story, Perfectly Unscripted, is a dairy farmer. The profession was one he’d grown up around, but I imagined him to be more “modern” and wanting to improve on the methods. So I sought out the logical professional organization--American Dairymen’s Association. Thankfully such a group had been in existence for more than a decade by the timeframe for my story, 1881. And I lucked onto the report from the annual meeting of this association from 1878--all 547 pages of it complete with paid ads for equipment and supplies. Love the internet.


Not only were presentations given about subjects presumed to be of interest to dairy men—feed ratios, soil types, equipment, quality of salt, breeds of dairy cattle, how to handle the dairy refuse—but quite a lively discussion was held over skimmed milk cheese. Almost as heated as the one about oleomargarine versus butter. On the cheese subject is where my feeling about modern topics was proven wrong. I considered the health issues of cheese made from a lower fat content and knew that phenomenon was one that gained popularity in the second half of the twentieth century.
In an open session held before the scheduled talks, the topic was introduced. Mr. C.W. Horr explained his success in achieving quality cheese after two to two and a half pounds of butter per 100 pounds of milk had been skimmed and how the freshness was maintained throughout the shipping process, thus allowing him wider distribution. (Horr exported to England where the average consumption was ten pounds per person compared to America were consumption varied between two-and-a-half to three pounds.) Questions flew about his methods and of what month of the year (I had no idea the fat content of milk varied by season) was he speaking. From the tone of the ensuing discussion (which reads like it became heated), the general members pressed Mr. Horr to reveal an exact recipe and method. He equivocated, stating he’d spent 4 years on experimentation and had found a process that worked for his northern Ohio farm. A statement that was not happily met. 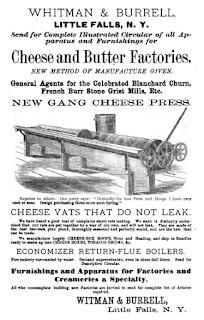 Think about it, every business man wants to know how to improve his profit margin. But the most vocal of the questioners stated he’d traveled quite a distance and paid his fees ($1 for conference, 75 cents to receive written report) as if he had a right to receive this information. (To be noted, the meeting was held in Cleveland and the attendees all came from Ohio, Pennsylvania, New York, Illinois, and Wisconsin. The farthest west was Iowa.) Businessmen of today are considered astute to keep trade secrets to themselves, but that was not the general sentiment of this particular session. Often we think of the 1800s as bucolic and low-key, but this report shows how entrepreneurship was alive and controversial even in the butter and cheese industry.

Perfectly Unscripted is book #9 in the Sweethearts of Jubliee Springs series. Tagline: Is the shared danger the lure between these individuals, or did Rilleta and Wit discover they have much more to offer one another?


Amazon
Posted by Linda Carroll-Bradd at 9:57 AM