Homesteading on the Prairie

By Kathryn Albright
Tales of Courage & Hope
* * * * * * * * * *
In writing my next book in the Oak Grove Series, The Prairie Doctor’s Bride, I had to do some research into homesteading on the prairie.

The early inhabitants of Oak Grove, a fictional town set along the Smoky Hill River, lived in tents made from the canvas of their prairie schooners, but with the Kansas-Pacific Railroad now established all the way to Denver (1878), the small town was growing and wooden structures were springing up as the train brought supplies from the east and wood from the Rocky Mountains. The town prospered with the nearby stockyards that shipped cattle (up from the drives in Texas) to the miners in Colorado and to Chicago. 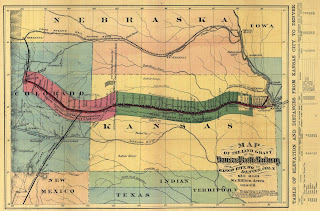 However, some who lived out of town on 160 acres of their own, were farmers who’d come west with nothing but a dream to take advantage of the government’s Homestead Act of 1862. Requirements to own a plot of land by this means included:
1.       Must be at least 21 years of age.
2.       Must be a citizen or an immigrant with the intention of becoming a citizen.
3.       Must pay a filing fee (usually at the Land Office in the nearest town where it was also determined that no one else had claimed that particular parcel of land.)
4.       Must farm the land and live on it for five years before gaining the official deed to the property.
5.       Must build a home within six months. (Requirements in some states included the minimum dimensions of the home, one glass window, and also building a well.) 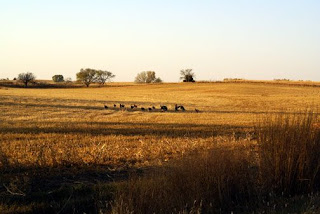 On the open prairie, it seemed that all weather was extreme. On arriving, many of the “sod busters” began by building a small dugout into the side of hill, just to escape the relentless wind, sun, snow and rain. Since there were no trees or large stones for construction material, the settlers would use their mules, oxen, or horses, and a special plow to cut rectangles of sod, 18” x 24” (weight = 50 pounds) to use as “bricks” for their home. These would be set so that the roots could grow and intermingle into the next row of sod, creating a very strong wall. 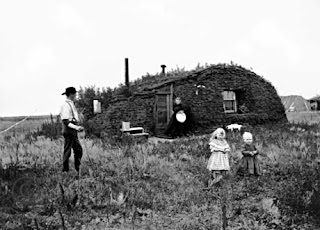 The base of a soddie was wide and the walls would then taper inward slightly to allow for settling. Most had a dirt floor, but later a puncheon or plank flooring might be used. On the inside, the walls would be plastered with mud to create a smooth appearance. Open windows were covered with oil cloth. A fireplace for cooking would take up one wall of the house.

The roof caused the most concern in the building process. Wooden poles, laid across the rim of the sod house, were then overlaid with bundles of brush. On top of the brush, more sod blocks were placed. Dirt clods dropping form the roof was a problem as well as other insects and an occasional snake. If the sod became too wet after a hard rain it could cave in. Every few years, depending on the severity of the weather, the roof would have to be replaced. Structures had one to three rooms and were surprisingly very snug and warm in the winter and cool in the summer.

With all the difficulties they had to face, the years of too much or too little rain for their crops, less than 50 percent of homesteaders achieved the five-year requirement and acquired the deed to their land. Those who did not, went back home or traveled further west. Although most homesteaders consisted of a husband and wife and often children, a single woman or widow could also homestead and work to own the land. Once source reported that women made up to 12 percent of the homesteaders in the Rocky Mountain area.

* * * * * * * * * *
Learning these facts helped me form the basis of my fictional character’s life on the prairie. I was worried that the land would not be hers after her husband died, but was gratified to know she could hold on to it and it would be there for her son, and her son’s son if he chose that same life. That is why she fights for it so fiercely. The Prairie Doctor’s Bride, a sweet western historical, won’t be available for a few more months, but it is available for pre-order here ~