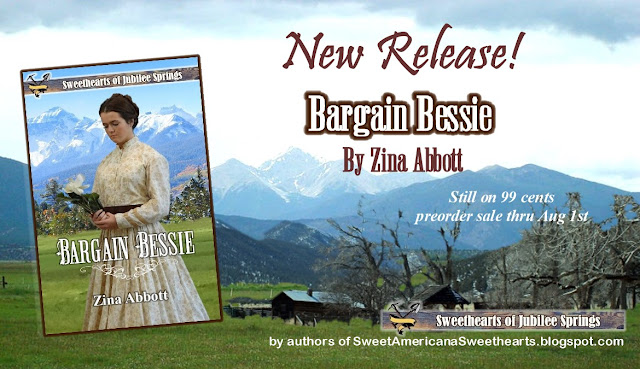 Today is release day for
Bargain Bessie
by Zina Abbott

After years of caring for her parents, Bessie Carlson considers herself well past marriageable age. After she is left alone and destitute, she moves in with her aunt and uncle, the owners of Brinks Mercantile in Jubilee Springs. To some of the single men in town who are looking for wives, she is more than eligible. She quickly gains the moniker of “Bargain Bessie” because she is already in town. They won’t have to pay the bridal agency fee, travel money or railroad tickets to get her there.
Zeb Jacobson lives on a remote ranch in nearby Monarch Bend. He takes advantage of the relatively mild weather of the region to run his cattle on government land in the mountains. After his foreman badgers him to start looking for a wife, Zeb considers the possibility of marriage. However, since he is in his late thirties, he has no desire to meet young women just out of the schoolroom.
On a trip to Jubilee Springs for supplies, Zeb meets Bessie. He’s confused by her claim she is not free to marry. When he hears about the Bargain Bessie moniker, he knows he must come up with a plan to convince Bessie she isn’t a bargain of last resort, but a priceless treasure.

Bessie quelled the emotion rising within her as she finished the letter. She hadn’t been able to see much of her aunt and uncle in recent years. Unfortunately, not only had the Carlson’s finances suffered reverses which had prevented them within the previous decade from traveling to visit family, the mercantile her uncle and aunt had owned and run in Indianapolis in what originally had been an up-and-coming neighborhood when they first built the store had ended up being in an area that had declined as property values dropped. Bessie knew from previous letters her uncle’s mercantile had been losing money for years. Without there being enough money for him to justify drawing a wage, Aaron and his siblings had each gone their own ways, Moses to work with a competitor across the city, Miriam to marriage, and the twins, David and Jonathan, had gone to work for a large ice house in the city. 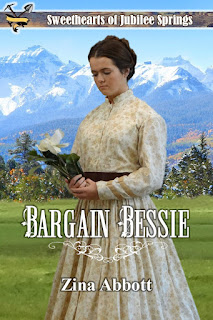 It was Aaron who, after getting on with the Prosperity Mine in Jubilee Springs, had convinced his parents to sell the property, pack up their stock and bring it to Jubilee Springs. They operated out of a tent until Aaron could help them build a store with living quarters above. Only now Aaron was married and had moved to company housing owned by the mine. Her aunt had said he still helped out at the store. Actually, it sounded to Bessie like Andrea did more of the helping out now. Her aunt and uncle were alone, but they still had Aaron and his wife nearby.
Bessie folded the pages and returned them to the envelope. She sat with the letter in her lap as she let the words of the letter settle within her.
When mother is gone, I’ll have no family nearby
Emeline’s words brought Bessie out of her reverie. “Elisabeth, did you record Aaron’s marriage in the family Bible? I believe your Aunt Desi gave enough information in her letters so you should have all you need.”
“I’ll do that right now, Ma.” Bessie stood and took the letter back to its place on top of the chest of drawers. She opened the Bible and pulled the ink and pen from the bottom drawer.
“It won’t be long and you’ll be putting my final information in there. I need you to take care of that Bible so it can get passed along.”
Bessie once again opened the letter to be sure she spelled Andrea’s maiden name correctly. At least with them getting married on the fourth of July, it was easy to remember the date. “I will, Ma. After your time comes, I’ll see Martha gets it so it can go down through her children.”
“No, you keep it. If that husband of hers gets ahold of it in one of his drunken rages, who knows what he might do with it, especially with it being a King James Version instead of whatever the Catholics use. I’ll not tolerate him having the opportunity to destroy that Bible with the record of our family. Besides, I bought Martha her own Bible when she married. I didn’t want her to get caught up in the Catholic religion and forget what she had learned at home. Hopefully she’ll take care of that one.”
“All right, Ma, I promise I won’t give it to her, at least not while Patrick’s still alive. But, I can’t keep it forever. I’m not married, Ma. I have no one to pass it down to except to a niece or nephew.”
“The family Bible goes with the youngest daughter, Bessie, you know that. And you will get married.”
Bessie shook her head in frustration. She and her mother had been through this conversation before. “Ma, at my age, there is little chance I will marry.”
Emeline kept her voice soft, but confident. “You will marry, Bessie. I can feel it.”
“I don’t see it, Ma. It certainly hasn’t happened yet.”
“You don’t see it because you have been busy taking care of your father and I after our reversal of fortune and decline of health. Once you are free of me, your time will come.”
“No man wants a twenty-nine year-old spinster, Ma.”
“You may find your husband has children by a first wife who has passed, but I feel confident you will marry and have a family of your own someday. I need you to promise me something, Elisabeth.”
Sometimes Bessie hated it when her mother called her Elisabeth. It either meant she had done something to displease her mother, or her mother was dead set on something and would not take no for an answer. “What is it, Ma?”
“If your Uncle Simon offers to let you come to Colorado to live with him and your Aunt Desdemona, you go.”
“Why would he do that?”
“Because I’m going to ask him to. You and Aaron were as close as twins can be without being born to the same parents at the same time. You will have family there. I want you to go. And now that Aaron’s married…”
Bessie turned to stare at her mother. “Just because Aaron married doesn’t mean I’d marry if I go there.”
“Desdemona said in her letters there is a shortage of women up that way. You’ll find your age won’t matter to a lot of those men, especially since a lot of them will still be older than you are.”
Bessie inhaled and looked off in the distance as she considered her mother’s words. “I don’t know, Ma. I’m not sure I’m cut out to be a miner’s wife. Aunt Desi and Uncle Simon love it up there, but it sounds pretty rustic to me.”
“It sounds exciting to me. Simon was my baby brother, born when I was almost of an age to begin courting. But, if I were younger, closer in age to him and Desdemona, and in better health, I’d go. I have loved living in Terre Haute, but the time for the Carlson’s to call this city home has passed.”
Bessie studied her mother, puzzling over the look of longing on her face. It was a side of her mother she had not seen before.
“Elisabeth, promise me this. You will go if you can.” 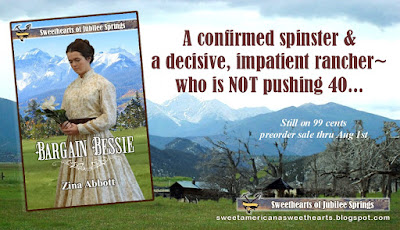 All Sweethearts of Jubilee Springs books are also available on Kindle Unlimited for at least three months after publication.