Today I’m proud to announce the release of my second novella in the Sweethearts of Jubilee Springs series. Perfectly Unscripted tells the story of the younger sister of the heroine from my first book.


A fun fact from my research. During the 1870s a controversy was discovered about butter. Most people take this mild condiment for granted. But the 1878 America Dairymen’s Association annual report contained the record of a presentation made at a meeting about a company that was discovered in Chicago to be making butter from beef fat and shipping it to Europe as premium butter from a small town in England. Quite the scandal. 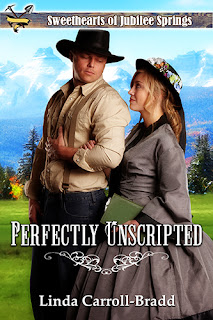 BLURB: Rilleta Northcliffe’s world has already been turned upside-down with her father’s arrest. While traveling to Colorado as a mail-order bride, she is traumatized by a gang of thieves. Only the steady green gaze of a stranger keeps her sane. Dairy farmer Wit Vanderveer wished he could have done more to prevent the blonde’s involvement with the gang. Safely in Jubilee Springs, neither can stop thinking of the other. Is the shared danger the lure between these individuals, or did Rilleta and Wit discover they have much more to offer one another?


Amazon buy link
EXCERPT: Where is the southbound train? He had to get back to Jubilee Springs to handle the evening milking. Straightening to his full height, he looked over the majority of the heads of the milling crowd. The lines of passengers at the ticket windows were three or four people deep. He added himself to the back of the closest one and bit back a groan. Inactivity never sat well. Nor did time away from the land he’d worked so hard to improve and nurture. While he waited, he glanced around, interested at the travelers who appeared to come from all walks of life.


Outside, a black carriage with gold filigree accenting the doors drove up to the front curb of Union Station and stopped. The driver hopped down and jogged around the back of the carriage.


The driver pulled open the side carriage door, and three well-dressed ladies stepped out in quick succession—a blonde, a brunette, and a redhead. They moved toward the entrance with the driver bringing up the rear as he juggled several satchels and valises.


His gaze was caught by the slender blonde lady with ringlets that swayed and bounced with each step. Wide-eyed, she glanced in all directions, like she’d not traveled much and the comings and goings of the depot were as entertaining as a circus. For a moment, he lost sight of her through the narrow arched windows as she ascended the steps, even though he rose onto the balls of his feet. Then he spotted her silhouetted in the doorway and couldn’t break his stare. A small straw hat with a white ribbon perched on her head. The cut of her blue dress fit her figure well, and the full skirt swished along the polished parquetry floor.


A throat clearing from behind snapped his attention to where he stood. The line had progressed while he’d been occupied—more like gawking—with the lovely stranger. With one long stride, he closed the gap.


A hiss of brakes sounded followed by three sharp blares of a whistle.


Finally. Wit stepped out of line to check on the engine’s number. As he moved toward the conductor calling passengers for points south, he collided with someone who stepped into his path. The heady scent of lavender tickled his nose, and he reached out his free hand to steady her. “Pardon me.”


The sweet sound, light and airy, rang like a tiny bell in his head. Wit wrapped his hand around a feminine elbow, thin enough his fingertips touched his thumb. Vaguely, he registered this woman was the same young one whose arrival he’d been watching. He looked down into a pair of bluish-purple eyes the color of a Rocky Mountain columbine that grew at the highest elevations of his meadows. When he finally registered the lady’s expression had changed from wide-eyed surprise to frowning concern, he released his grip and gestured his abdication of the right of way. “Please, proceed.”


The woman dipped a curtsey. “I’m obliged. Would you know if that’s the train to Jubilee Springs?” A hand covered in a lace glove waved toward the train. But her gaze roved his face, eyebrows winged high.


His heart stuttered in his chest. This lady is traveling to my town? Not used to being the object of female scrutiny, Wit shuffled his boots and nodded. “That it is, miss.”


“Thank you.” Then she turned and waved a hand. “Missus Millard? This train is the one.” She scurried to rejoin the other two ladies.


Within a few seconds, Wit lost sight of her in the passengers gathering around the conductor. Then he shook his head. Just as well. All his energy should be focused on streamlining the dairy procedures for optimal output. After moving through one car with no aisle seats, he claimed one in the next passenger car. A quick glance at the other passengers located the group of three ladies sitting together at the far end. All he saw of the blonde were the ringlets dangling below her hat. Again, not his business.
Posted by Linda Carroll-Bradd at 9:03 AM