Oak Grove, Kansas, the fictional town and setting of the Oak Grove Series that I am writing with Laurie Robinson, grows and prospers with the cattle industry in the 1880s much like Dodge City, Ellsworth, and Abilene. With its stockyards and a train depot, I knew some of the inhabitants would have to have jobs that involved the cattle business. 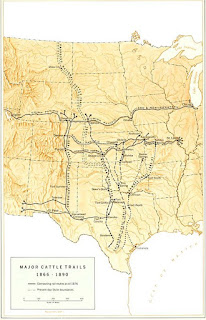 The era of cattle drives in American history began at the end of the Civil War and lasted into the 1890s. The demand for beef in the big cities in the east as well as an abundance of cattle in Texas (five million!) created an opportunity for hard-working men. In Texas, a steer was worth about $3, whereas in Chicago, that same steer would fetch an average of $20, although demand would sometimes push its value to $40. Other reasons for moving the cattle north were to feed the miners in Colorado and California, or to stock ranches as far as Montana, the Dakotas and Wyoming.

Some herds were as large as 3,000 cattle. Along with the cattle, extra horses were also included on the drive so that when one horse tired and needed to rest, another could be saddled and used. Cattle could stretch out for a mile on the trail and to manage the herd, cowboys had certain positions. 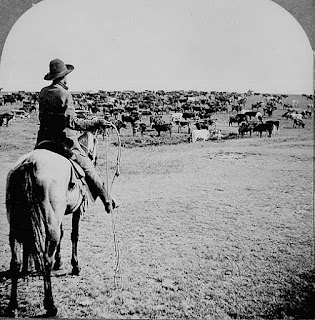 Point – Rode out in front and helped guide the herd.
Swing – Rode along the flanks of the herd to keep them gathered in.
Flank – Rode behind the Swing and performed the same job.
Drag – Rode behind the herd and kept stragglers from being lost or falling behind. A dusty job.
Wrangler – Took care of the remuda of extra horses. Lowest paid position.
Cook – Drove the chuck-wagon, cooked the meals. Next to the boss, he was the highest paid man on the drive.

These were not gentle milking cows! Longhorns were cantankerous and bad-tempered. The horns on a steer spread an average of five feet from tip to tip. Rounding up cattle, branding them to establish ownership, and getting them to head in one direction as a group was not without mishaps and sometimes dire consequences. Then there were the dangers along the trail. 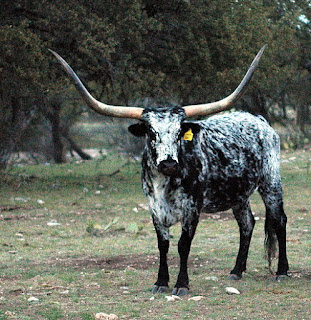 Range cattle were not smart. They got lost in gullies. They headed out into snowstorms rather than seeking shelter. They were easily spooked and alarmed. A flash of lightning, the boom of thunder, or even an odd odor could initiate a stampede where the herd would run for miles. The only way to stop a stampede was for the cowboys to get out in front of the herd and fire their pistols, wave their hats and yell in a effort to confuse and frighten the cattle into slowing and circling until they calmed down.  One wrong decision and in an instant a rider could be impaled on a horn or trampled to death under hooves. Stampedes were the chief threat and worry for a cowboy on a trail drive.

Another danger could occur at river crossings. Should a cow or steer panic, they could drown and take a cowboy down with them.

Then there were the predators. Rustlers—men who would steal the cattle and, although much less common, Indians on the reservations who attacked the drive. Animals such as the American Timber wolf, cougars, brown bears, and farther north…grizzly bears where also a threat. Rattlers and scorpions bothered the men. Although their bite or sting was not usually fatal to a healthy young man, it could still cause horrible pain. A smart cowboy checked their bedroll before bedding down at night, and in the morning, checked their shoes or boots before putting them on.

Weather was also a danger. Freezing temperatures and blazing heat were both enemies to the herd and to the cowboys. Finding water along the trail was a matter of life and death. Traveling this way, a drive from San Antonio to Kansas would take about two months. No matter how careful the cowboys were, there was always a percentage of cattle that did not make it to the stockyards.

In the book that I just finished and sent in to my editor—titled The Prairie Doctor’s Bride – a character has an accident along the trail, leaving behind some unfinished business in Oak Grove. More on this in a future post…For now, Mail-Order Brides of Oak Grove, the first book in the Oak Grove Series, is available. 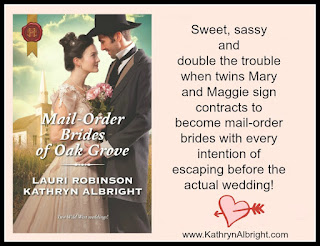