A Little Bit About Bloomers ... 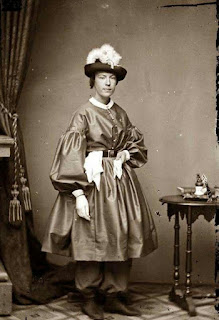 Hi! Kit Morgan here with a little bit about bloomers! In case you were unaware, bloomers are a historical piece of women's clothing with a very interesting history. Between 1851 and 1854, several women's rights activists experimented with a new kind of clothing -- the so-called Bloomer outfit, whose pantaloons and loosely fitted tunic gave women an unaccustomed freedom of movement and relieved them of the weight of voluminous long skirts with their starched slips and the discomfort of constricting stays and corsets.
Controversy over the dress reform was really a disagreement over tactics -- one of the first to arise within the women's movement. How's that for some interesting history?
The women who tried the new dress (including Amelia Bloomer,  Elizabeth Cady Standon, Lucy Stone and Susan B. Anthony among other famous women's activists of the day) found it delightfully comfortable and liberating. They understood -- as Lucy Stone wrote in a letter to Susan B. Anthony -- that changing women's costume was closely related to changing their way of life. 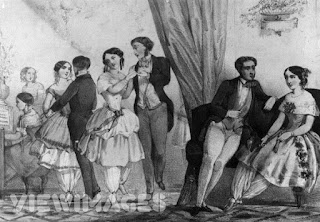 Dress reform, however, turned out to be one of the most provocative and inflammatory changes proposed by the movement. The Bloomer costume quickly became the object of ridicule both publicly and privately, and what Lucy Stone described as a "vast deal of annoyance" was a personal martyrdom for those who wore it. They were targets of cruel and painful condemnation -- of criticism from the pulpit, jeers in the streets, ostracism at social gatherings. It was not long before most of those who had adopted the new costume, commencing with Stanton, reluctantly gave up wearing the trousers and put aside dress reform for other goals that seemed more important. A few, such as Elizabeth Smith Miller and Susan B. Anthony, disagreed and argued that the issue was too important to concede. Eventually, however, Anthony too forsook the Bloomer, exclaiming that she could bear no longer the emotional anguish that came with wearing it. 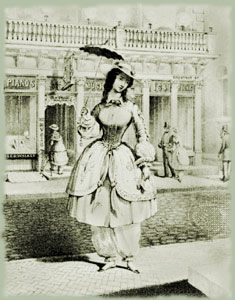 While concern with dress reform never completely died out during those early days of the women's movement, women continued to discuss and write about the importance of clothing to their condition of life. Suffice to say, it did not become a major goal of the movement.

If you'd like to check out my books, you can find them here: www.authorkitmorgan.com