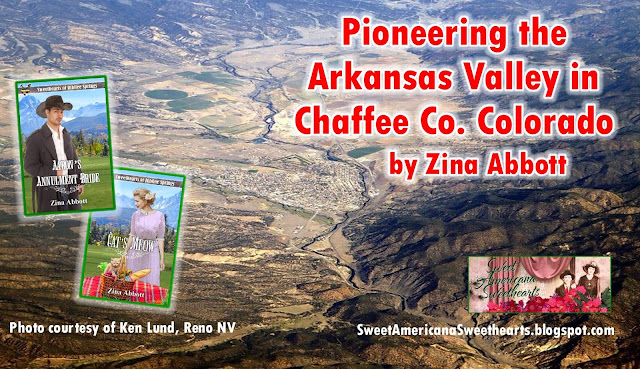 Hopefully, dear blog reader, by now you are aware that some of the authors who write for the Sweet Americana Sweethearts blog have collaborated on a new series, Sweethearts of Jubilee Springs.

Jubilee Springs is a fictional mining town set in the Arkansas River Valley high in the Rocky Mountains of Colorado. Although it is not about the community of Salida, many of the elements for our stories are based on Salida, Chaffee County, and the surrounding mining communities of central Colorado.

Writing about a fictional town is new to me. My experience has been to choose a locality and then research it to death to make my stories as realistic as possible. We still are attempting to do that with this series as far as setting, mining and agricultural conditions and how life was in a rural mountain mining town in 1881. It is just not about an actual town.

However, as part of my research, I stumbled across the History of Arkansas Valley, Colorado, with a publication date of 1881, the original of which is in the Cornell University Library. It has no known copyright restrictions, and the good folks of that university have made it available online.

The stories set in Jubilee Springs start in the summer of 1881, just about the time the town of Salida was being formed. So, even though Jubilee Springs is fictional, and all the characters are fictional, who were some of the real residents of the Arkansas Valley—specifically those who lived in Salida at one point?

Considering we are writing a romance series, I also wanted to know about their marriages.

One of the first settlers in Chaffee County was Noah Baer. He was born in Rockbridge County, Va., March 15, 1820. He remained at home, upon his father's farm, till twenty-six years of age. He then went to Platte County, Mo., and was engaged in blacksmithing for three years. In 1856, he went to Iowa, and worked at his trade until 1860, when he emigrated to Colorado and was working at his trade in Fairplay till the fall of 1862, when he removed to Cache Creek. In 1868, he purchased a farm one mile from where Salida now stands. Then all was a wilderness, but now he can see the iron horse pass his door nearly every hour in the day.
Mr. Baer was married, in 1877, to Miss Frances D. Ball.

[Mr. Baer was about fifty-seven when he married.]

Perhaps no one who went to Leadville by stage, before the days of railroads, will fail to remember Bale's ranch, and the genial proprietor of the eating-house there. He was born in Butler County, Penn., August 19, 1820; he remained at home, upon his father's farm, till he was twenty-five years of age, after which he was farming for himself, till 1855, when he went to Iowa, where he lived for several years. In 1861, he went to Missouri, and had several contracts for carrying the mails; in 1863, he emigrated to Colorado, and was engaged in mining in California Gulch, for one year. He then took up a ranch, on Cottonwood Creek, where Buena Vista now stands, and lived there two years.
The grasshoppers ate up all his crops, so he ran for Sheriff of Lake County, and was elected and served two terms. He afterward bought the ranch upon which he lives, near Salida, and kept a stage station there for six years.
He was married, in Butler County, in 1852, to Miss Sarah Williams. Mr. Bale is one of the best known and highly respected citizens of Chaffee County.

[Mr. Bale was about thirty-two when he married.]

This gentleman was born in New Ipswich, N. H., October 4, 1839. At the age of twelve years, he went to learn the tinner's trade, and when twenty-two years of age, started the stove and tinware business at Mattoon, Ill., where he remained till 1873, when he came to Pueblo, Colo., and clerked for G. P. Haslip in a hardware store. In May, 1880, he started the hardware business at Salida, Chaffee Co., and has built up a flourishing and paying business. He was married, in Mattoon, III, in 1860, to Miss Lizzie Horn, who died June 4, 1879.

[Mr. Bateman was married at about twenty-one years of age.] 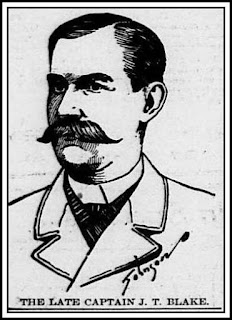 Capt. Blake, a prominent merchant of Salida, Chaffee Co., was born in Cumberland County, Me., March 28, 1837. He received an academic education, and when only sixteen years of age, went to Ohio and taught school one year. He then attended Milton College, Wisconsin, for one year and a half, after which he went to Missouri and taught school.He served in as a Captain in the Civil War.
He was married, in 1866, to Miss Annie L. Maxwell, daughter of Dr. Joseph L. Maxwell, of Cass County, Mo.

[Capt. Blake married at about twenty-nine years of age.]

Among the old pioneers of Colorado, the subject of this sketch holds a prominent position. He was born in Holmes County, Ohio, March 31, 1830. He remained at home upon the farm long after he was twenty-one. His father died in 1855, and his mother in 1856.
In 1858, he sold the old homestead and moved to Van Buren County, Iowa, and in the following winter moved to Kansas. In the spring of 1860, he emigrated to Colorado; he started a hotel, and sold hay and grain, at Union Ranch, sixteen miles from where Leadville is now located. In 1869, he went into the Arkansas Valley, near what is now Salida, and took up a ranch, and has been farming and cattle-raising since. He was married, in 1855, to Elizabeth Boon, of Holmes County, Ohio, and has a family of nine children.

This enterprising young merchant was born in Louisiana, Mo. , in 1856. Mr. Carstarphen, Sr., was a banker in the same town for twenty-three years. Being desirous of giving his son a collegiate education, he sent him to a preparatory school, in New Haven, Conn., with a view to entering Yale College. But the young man was bent on business, and so, at the age of sixteen, he was managing a wholesale grocery in Chattanooga, Tenn.
Afterward he went to Taylor, Texas, and engaged in the lumbering business. Still unsatisfied, he came to Colorado, became Cashier of a bank, in Salida, and subsequently Cashier of the Arkansas Valley Bank, in Poncha Springs.
This position he shortly resigned, in order to devote more time and energy to the hardware and lumber business, which he was managing at the same time. Mr. Carstarphen has the true elements of success, and is destined to become one of the solid men of Poncha Springs. He is now about to buy himself a home and settle down to the comforts of domestic life.
[No mention of marriage.]

Prominent among the business men of the new and growing town of Salida is Martin M. French, who was born in Otsego County, N. Y., January 29, 1837. He was reared upon a farm and received a good common school education. In 1863, he went to California and was mining in the principal camps there and in Nevada for six years. In 1872, he went to Bay County, Mo., and was engaged in the drug business for four years.
In 1876, he went to Deadwood, and was clerking in a grocery and clothing store. In October, 1878, he came to Colorado, and was one of the first to start business in Salida. He is now doing a very nice drug business and is highly respected as one of the solid men of the town. He was married May 6, 1879, to Miss Belle Chamberlain, of Canada.

Mr. Moll was born in Holland May 4, 1857.
He received a good education in his native country, and, in 1878, came to America. He spent some time in Virginia, Baltimore, Md., and New York City, and in May, 1880, he came to Colorado, locating in Salida, Chaffee Co., where he has been engaged in the wholesale and retail tobacco and cigar business since.
Mr. Moll is highly respected in Salida, and has shown business energy in building up his trade in that town.

[No mention of marriage]

Mr. Peterson was born in Sweden August 31, 1826. He came to America in 1851, and was engaged for ten years farming in Illinois. He was one of the early pioneers of Colorado, coming here in 1861, locating on Cache Creek, near Twin Lakes. He was stock-raising and mining till the fall of 1865, when he located the ranch upon which he now lives, near Salida, Chaffee Co. His was one of the first ranches located in this valley. He was married, in 1875, to Mrs. Ellen Malina Solomans. 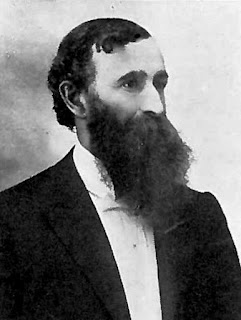 Mr. Roller was born in Gowanda, Erie Co., N. Y., November 1, 1843. When the war broke out, he was one of the first to respond to the call of his country. He enlisted as private, and was mustered out, after four years and five months, as Lieutenant Colonel.
After leaving the army, he attended Dartmouth College, and afterward went into the furniture business in Ottawa, Kan. He remained there six years. In 1875, he emigrated to Colorado, and was engaged in the furniture and stock business in Colorado Springs, until June, 1880, when he removed his furniture business to Salida, while the surveyors were still laying out the town.
Here the firm of Roller & Twichell have built up a large trade. He was married, in 1871, to Miss Clara M. Hayes, of New York.

Mr. Rule, one of Chaffee County's most successful stock men, was born in Clay County, Mo., March 1, 1847. He received a good common school education, and, at the early age of sixteen years, he started out to make his fortune in the Far West. He came to Colorado, and was mining in the different camps for two years; he then returned to Kansas City and spent one year. In the fall of 1866, he again came to Colorado and was placer mining in California Gulch for two years, after which he located in the Arkansas Valley, near where Salida now stands, and has been engaged in the stock business since with the best success.

[No mention of marriage.]

Prominent among the ranchmen of Chaffee County is the subject of this sketch. He was born in Platte County, Mo., November 14, 1840. He remained at home upon his father's farm until nineteen years of age, when he went to Texas on account of his health; he returned to his native town in the fall of 1860, and, when the war broke out, joined the Confederate army, and was at the front in all the important engagements west of the Mississippi River till 1865; he then returned to Missouri and was engaged in farming till 1874, when he emigrated to Colorado, first locating in Canon City; in the following spring, he bought a ranch in the Arkansas Valley, near where the town of Salida is now located; he has an elegant farm of 320 acres, under good improvements. He was married, in 1866, to Sallie J. Woods, in Clay County, Mo.

I have two novellas in the Sweethearts of Jubilee Springs series available.

Andrea agrees to marry Aaron so he can get his mining company house, but then she wants an annulment.

Catherine loves Harold and wants to marry him. There is just one “meowly” little problem….

~o0o~
To read and enjoy all of the books in the Sweethearts of Jubilee Springs series, please sign up and follow us on Amazon by CLICKING HERE.