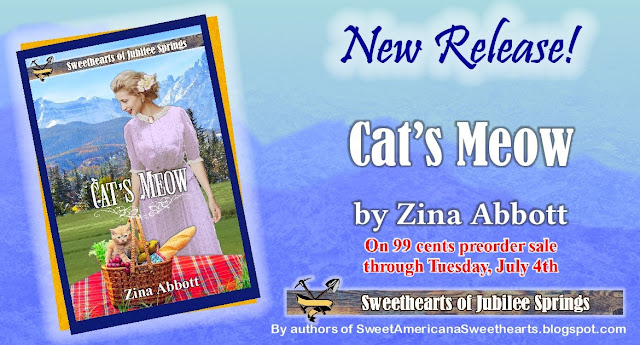 Today for Blog Tour Tuesday we are featuring
Book 6 in the SWEETHEARTS OF JUBILEE SPRING series,
Cat's Meow
by Zina Abbott

Here is the Book Description for
Cat's Meow: 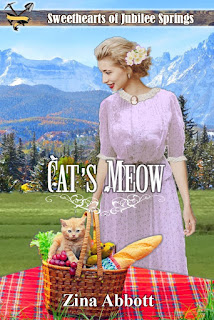 Catherine “Cat” Everett has lost everything. She finds and adopts an abandoned, half-grown kitten. Unbeknownst to Harold Calloway, the man she has been writing to in Jubilee Springs with the intent of marriage, and enduring the disapproval of the railroads who do not allow pets to travel in the passenger areas, she decides to bring the kitten with her.
When she arrives in Jubilee Springs, Catherine immediately falls in love with tall, lanky miner, Harold. She wants to marry him, but there is one “meowly” little problem.

Cat’s Meow was such a fun story to write. It was a little hectic to write two stories so close together. However, Andrea in my first story, Aaron’s Annulment Bride, Book 3, needed a friend to help her get away from a bad situation. Catherine in Cat’s Meow was that friend. They traveled together, went to a few of the same events after they arrived in Jubilee Springs, but their stories are entirely different.

Like Aaron’s Annulment Bride, Catherine’s story takes place the same long Independence Day weekend in 1881. In that year, July 4th fell on a Monday. A lot took place from Friday, July 1st when several women showed up in Jubilee Springs until that Monday.


Here is an Excerpt:
The late dinner was a quiet affair. Catherine still felt consumed with grief. Caroline not only was sorrowful, but young Emma who had no idea what was going on and didn’t understand the emotions emanating from the people around her kept her mother busy. Catherine assumed Arnie also felt sorrowful about his mother’s death. She noticed he kept his eyes on his plate the entire time.
After the meal ended, Arnie rose to his feet and heaved a sigh as if preparing himself for facing an unpleasant task. “Catherine, once you and Caroline are finished washing the dishes, I need to speak with you in the parlor.”
Catherine noticed he only said he needed to talk to her. He must intend to already discuss the terms of her caring for the house. She wondered if he expected rent from her, or if keeping up the house and property until he was ready to live there would suffice.
The two women washed dished and cleaned the kitchen mostly in silence, although little Emma crawling around on the floor kept them both busy. After they finished, just as Caroline picked up her daughter, she turned to her sister, keeping her voice low enough their cousin in the parlor wouldn’t hear. “Catherine. I hope he lets you stay.”
“I don’t know why he wouldn’t. Someone needs to look after the house, and he and his wife have their own home back in Kansas City.”
“Just so you know, if he asks you to leave, you can come live with us until you get something settled for yourself. It’s only a one-room soddy, but we’ll make do.”
Catherine grabbed her sister’s arm and squeezed it in gratitude as Caroline rocked a child that obviously needed a nap but was fighting sleep. “I appreciate your offer, Caroline. I hope it won’t come to that.”

All Sweethearts of Jubilee Springs books are also available on Kindle Unlimited for at least three months after publication.

Posted by Zina Abbott Author at 7:14 AM