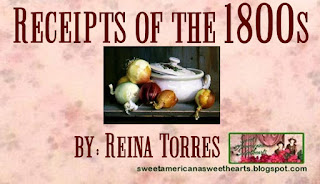 I'm a bit of a book pack rat. The annual Friends of the Library sale in Honolulu, Hawaii, is my crack... errr laudanum. I have more books than I could possibly read in  my lifetime and perhaps a few more besides. Part of my excessive collection is comprised of Civil War Era Ladies Magazines bound by year.

I thought I'd share some of the 'gems' I found in these editions, as it fits the Old West/Historical books that I write and I think it informs the world around my characters.

The first thing to note is that Recipes were called RECEIPTS. When I mentioned Receipts on another blog, people always wanted to correct me. I completely understand why, since we don't use Receipts in that manner in our modern world.

**Please Keep in Mind that I have NOT tested any of these recipes, so try them at your own risk** 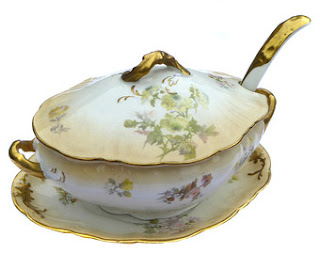 Today, I have a trio of soups!!

Vegetable Soup. – Four quarts of cold water, a half-pint of small barley, and two tablespoonsful of beef dripping, or a lump of fat from cold roast beef, or any fat from meat which is not otherwise needed; a teaspoonful of salt; of pepper, half a teaspoonful.  Let this boil gently for two hours, the four quarts will then be reduced to two. Shred up two large well-cleaned carrots in slices not too thick, also four large onions finely shred or chopped, two heads of celery, and three or four turnips cut up in very small pieces; put all these in when the soup is boiling. Let it boil gently for an hour and a half. Mix in a basin, a piled tablespoonful of flour with a little cold water till it is like cream; burn in an iron spoon, a teaspoonful of moist sugar till it resembles treacle.  Pour on this a little boiling water, and mix it with the flour, then pour the whole into the soup, stir it well, let it simmer once, and the soup is ready. 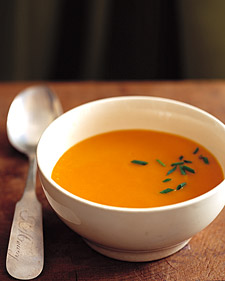 Carrot Soup. – Take six or eight full-grown carrots, scrape them clean, and rasp only the outer rind, or soft red part, and if you have a ripe tomato, add it, sliced, to the raspings, but use no other vegetable except onions.  While this is being done, the brother of any kind of fresh meat which has been got ready should be heated and seasoned with a couple of onions fried in butter, but without pepper, or any other kind of seasoning, except a small quantity of mace and a little salt; put the raspings into two quarts of the skimmed broth, cover the stewpan close, and let it simmer by the side of the fire for two or three hours, by which time the raspings will have become soft enough to be pulped through a fine sieve; after which the soup should be boiled until it is as smooth as jelly, for any curdy appearance will spoil it. 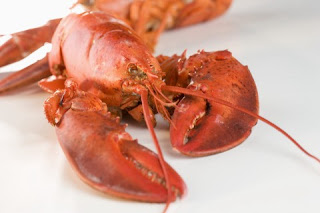 LOBSTER SOUP (French). – This soup is certainly most excellent, and worth all the care which must be bestowed upon it.  Take three young lobsters, boiled, or four small ones; take out the meat and cut it in small square pieces; take out the coral, not the berries, pound it so as to separate it, and sift it through a coarse strainer; take two quarts of good veal stock, quite a jelly, and cold; add to it the berries bruised, a tablespoonful of anchovy sauce, two ounces of butter, melted before the fire, into which rub two tablespoonfuls of flour; put it into the stock with a blade of mace, let it boil for ten minutes, then strain it:  add to it the meat of the lobsters and the whole of the coral, stir it up so as to make all thoroughly warm, but  if it now boils the color will be lost; put half a teaspoonful of anchovy sauce into it and sent it very hot to table.  Forcemeat ball, of minced meat out of the head of the lobster, with the soft part, the tips of the tails, and other scraps, some bread crums, a teaspoonful of flour, a few minced shrimps, and a very little grated nutmeg, mixed together with the yelk only of an egg, made into balls the size of marbles, and fried, should be thrown on the top of the soup directly it goes to table.

NOTE: you may see some words that 'look' like I didn't know how to spell, but I have typed the entries here as they are printed in the book itself.

Thanks for getting hungry with me today!