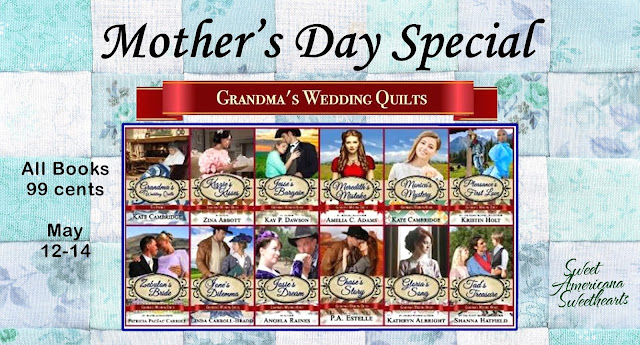 
Not since our pre-order special have we offered the entire Grandma's Wedding Quilts series at such a great price. If you haven't read them, now is the time to
purchase all 12 books for yourself.

If you have already read them and loved them, then for your mom, grandma, daughters and all the other special women in your life who enjoy reading on their Kindle,
we are offering these books once again for a limited time at
99₵ each


To find all the books in one place on our Grandma's Wedding Quilts Amazon Page,
CLICK HERE. 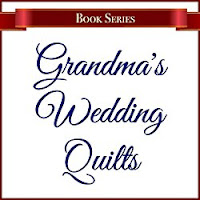 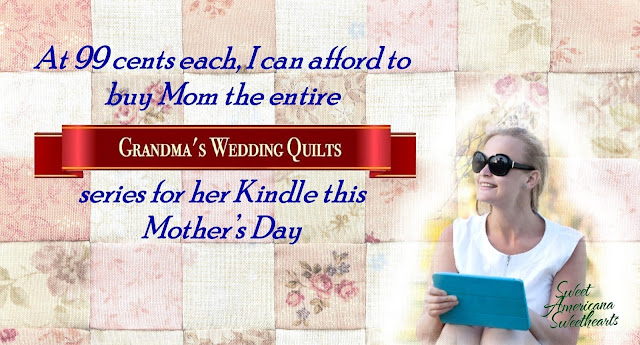 Here is a short description of our 12 wonderful romances in this series:

One year ago Hannah Quinn scored her dream job, and now the fait of the museum she loves will rise or fall on her next exhibit. But wait... there's a problem. She doesn't have a clue what her next exhibit will be!


When a trunk with two quilts is donated to the museum, Hannah's boss thinks she's wasting her time chasing down the history of the quilts, regardless of their beauty; but Hannah persists. She knows there's something special about these quilts, and a story that demands to be told.
Little does Hannah know, her friend Callum, a researcher and consultant, plays an unexpected a role in her investigation that leads to questions and discoveries that threaten the foundation of all she holds most dear.
Will her desperation to discover the story of the quilts cause her to lose the very thing she loves the most - or will the secrets she uncover lead her to more than she ever dreamed?


About Kizzie’s Kisses by Zina Abbott:

Running from hostile Indians attacking Salina, Kansas in 1862, feisty Kizzie Atwell runs into freighter Leander Jones traveling the Smoky Hill Trail. He is as interested in her as his stallion is in her mare. The two join forces to prevent the Fort Riley Army captain from requisitioning their prize horses for the cavalry. Will the bargain they make to save their horses lead to a more romantic bargain sealed with a kiss?

Thanks to a gunfight, Cora now needs to get to Kansas, and Jesse needs a new trail cook.  Left with no other choice, she joins the cattle drive headed north, with a man who isn’t happy to have her along.  They have miles of trail ahead of them - and a lot that can go wrong along the way.

The summer Meredith turned eighteen was filled with romance and laughter - two young men sought her hand, and she chose the one she thought would make her the happiest. He certainly was the most handsome, and the wealthiest, and could offer her the most pleasant life. But that turned out to be a mistake . . . one she would regret for a very long time.

In a strange twist of fate, now she's being given a chance to set things right. Will she be able to live down her past, or will her foolishness keep coming back to haunt her and keep her from ever being happy with the man she loves?

About Monica’s Mystery by Kate Cambridge:

Monica has to leave home, fast. Her parents are planning to marry her off and although all her friends are marrying, that is definitely not what she wants. She’s seventeen, an amateur sleuth, and sees no reason why she can’t join the ranks of the local lawman, or even become a Texas Ranger, should she choose! What will happen when she visits her best friend in Texas, only to find herself face-to-face with a handsome Texas Ranger, and knee-deep in territory she has no idea how to navigate?

No one will ever know how badly Pleasance Benton’s abandonment threw Jacob Gideon. He landed hard, hard enough he didn’t care to find a replacement. Now that he needs a woman, he figures the safest way is to order one from a catalog.

Pleasance is back to reclaim her rightful place at Jacob’s side. One way or another she’ll remind him theirs is a match made in heaven…once the shock wears off. The teensy-weensy problem? Jacob doesn’t know that she—his first love—is his catalog bride.

He’s vowed not to marry until he reaches Montana. Then he meets her, but she has other ideas.

Zebulon Benton dreams of going to Montana, but he’s the only son and his mother doesn’t want him to go and his father needs help with the family store. Unknown to Zeb, his mother sends off for a mail order bride. After all, if Zeb marries and settles down, he won’t want to leave.

Enter Amy Gordon from New York. She appears to be the perfect bride for Zeb. Except she also wants to go to Montana and nothing is going to stop her especially her love for Zeb.


About Ione’s Dilemma by Linda Carroll-Bradd:

Relocating from Des Moines to the Texas frontier brings more challenges than socialite Ione has ever faced. All she wants is to avoid scandal but local carpenter Morgan is intent on courtship.


About Josie’s Dream by Angela Raines:

Could Doctor Josephine (Josie) Forrester and Lawman William Murphy get past their beliefs about life and love and find the future they were meant to have?


About Chase’s Story by P. A. Estelle:

Chase wanted no part of going to college or following in his father’s footsteps and becoming a doctor. His dream involved cattle and horses and he follows that dream to the Arizona Territory. One cold, rainy day his life takes a turn when he finds himself looking down the muzzle of a Colt Walker barely being held up by a woman who has been badly beaten along with her three-year old son. Will she be someone Chase could let into his heart or someone who could destroy his life?

About Gloria’s Song by Kathryn Albright:

Gloria always does the proper thing, the expected thing as the daughter of a shipping tycoon. Having, Colin, a local tavern pianist, help her with an audition is crazy. But if music can cross class lines… can it also harmonize two hearts?

About Tad’s Treasure  by Shanna Hatfield:

He never intended to fall in love with her

Tad Palmer makes a promise to his dying friend to watch over the man’s wife and child. Years later, he continues to keep an eye on Posey Jacobs and her precocious little boy. The only problem is that he’s not sure his heart can withstand the vow he made when he falls in love with the widow and her son.

Posey Jacobs misses her beloved husband, but her wrenching grief has given way to hope for the future as she finds herself falling deeper and deeper in love with Tad Palmer. However, the infuriating man doesn’t seem to notice her interest and treats her as he would his sister.

Throw in a goat who thinks she’s a dog, a town full of quirky characters, and this widow has her work cut out for her if she wants one handsome cowboy to give her his heart. 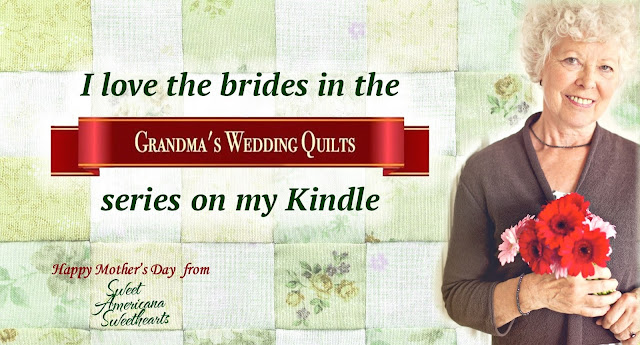 Also, to stay informed about any future series published by the authors of the
Sweet Americana Sweethearts blog,
please visit and follow us on our
Sweet Americana Amazon Page